SEMA has always been about the products and by proxy the cars, but it is also about making connections within the automotive industry. The biggest names in the industry are side-by-side with new faces displaying the next generation of creative genius. With all the most celebrated names in the community all in one place, it is hard not to want to speak with anyone and everyone about what they brought. Some, though, are absolute must-meets when their car just grips you and won’t let go. Kevin and his company Kraftwerx from Canada brought something that made us stop in amazement. Through that connection, we were able to interact with some amazing car builders to create a new friendship born from a common love of Volkswagen. Naturally, we invited Kevin and his team to come by our facility on their way home with the SEMA build we loved most: an absolutely stunning MK2 Golf GTI Rallye. 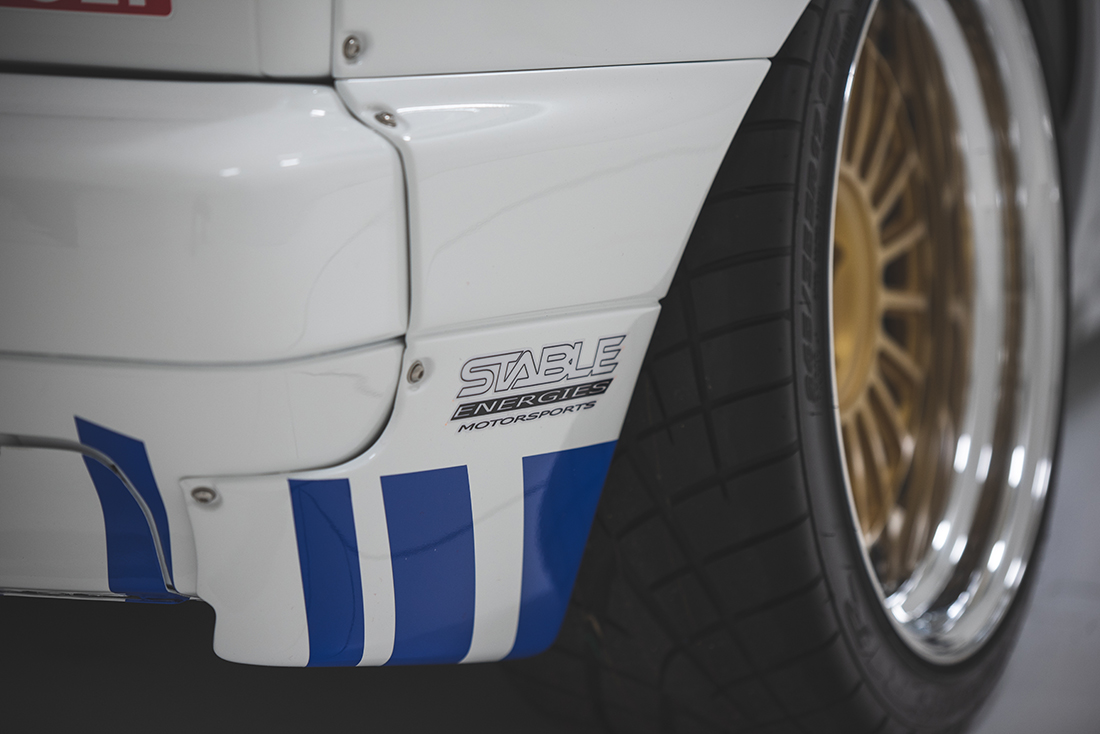 When they arrived, an unassuming enclosed trailer pulled by a massive Dodge entered the parking lot. From outward appearances, nothing hinted to the immaculate treasure hidden inside. The trailer housed what I have to say is one of the most well-rounded Volkswagen builds I have ever seen in person. As they opened the rear of the trailer, a glistening white gem of pure Volkswagen performance filled the interior with its astonishingly wide hips. Kevin grabbed a few of us, myself included, to help roll out what has to be one of the most expensive pieces of automotive glory I have ever touched. As it cautiously inched backward down the ramp, the car was exposed for us to see from every angle as it sat outside our shop. In a rare moment, I shut my mouth and began to pour over every intricate detail of this stunning MK2. 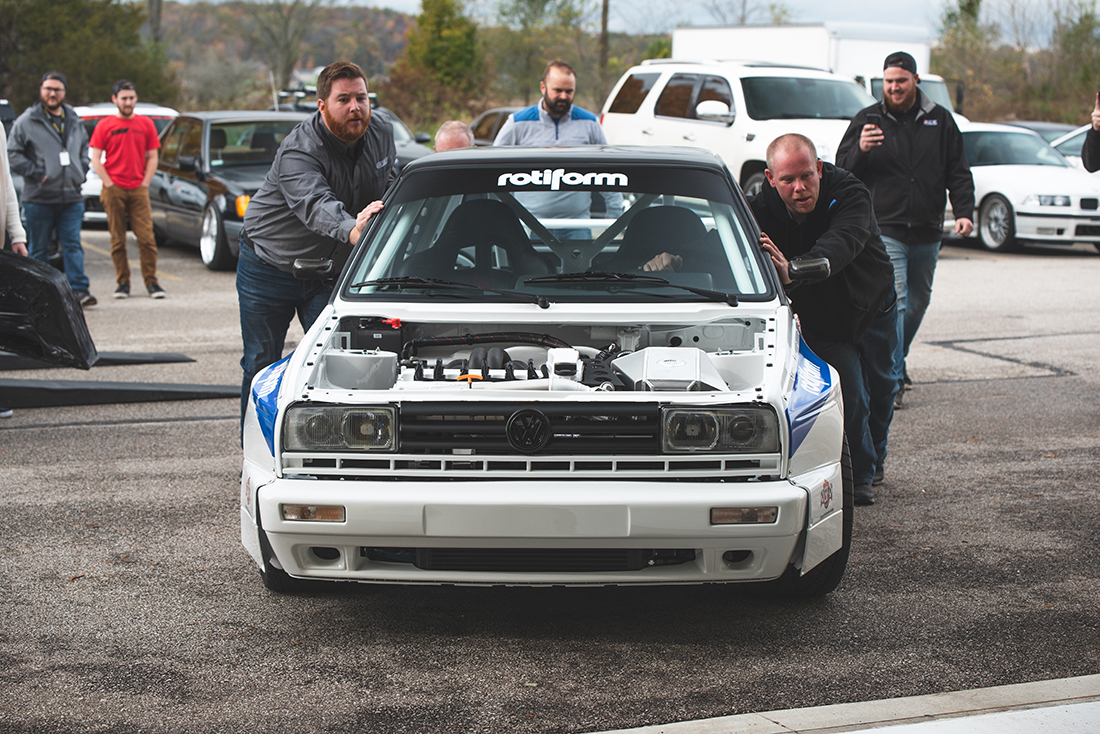 SEMA builds are, in function, designed to showcase specific parts and manufacturers, so the quality is expected to be high. Anyone who has been to SEMA, however, knows that projects are often incomplete, rushed, and exhibit cut-corners that make many scratch their heads. The Kraftwerx MK2 may have needed a few of us to push it out of the trailer and into the building, but it was not a result of shoddy work or shortcuts on the part of the builders.

This MK2 is more than just a SEMA show car and requires leg power to move for a reason. Kevin, the owner of Kraftwerx, was handed essentially a bare frame in June of this year by a customer who had a specific build in mind. The car was stripped and on a rotisserie when SEMA was only three months out. Most other builds had been conceptualized, planned, and underway since the close of SEMA 2017. Few, like the Kraftwerx MK2, became a SEMA build thanks to their outrageous creativity and exceptional quality that drew the attention of companies who wanted them at the show. When LIQUI MOLY heard about this MK2, they jumped at the chance to bring Kevin and his team to Vegas to display the build at their booth. It is a noteworthy achievement to build something that can’t escape the eyes of admirers who insist upon your car becoming the marketing vessel to showcase their brand. That accomplishment is awarded more weight when the build began with no intention of receiving that level of attention. 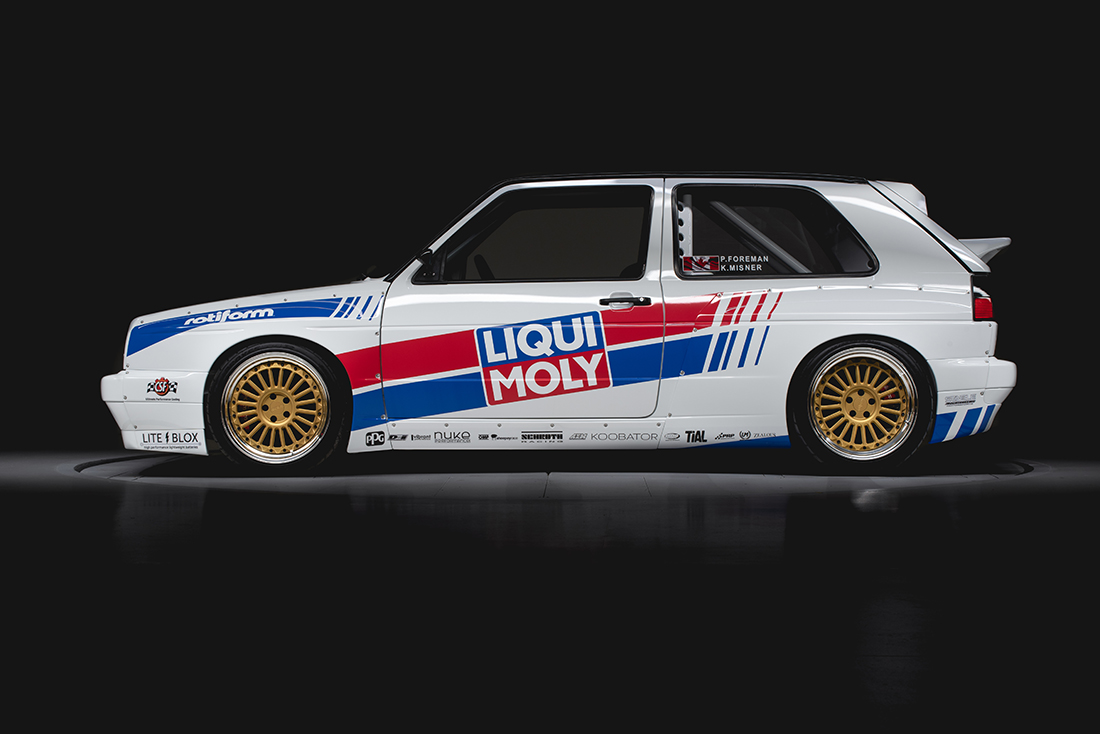 With such a short timeframe, it’s no wonder the car isn’t entirely complete, but there are definitely no complaints here. This GTI is a work of art on a white canvas of vintage European metal. The MK2 is entirely custom and built to the specifications of Kraftwerx’s customer, who intends to drive the car on the street and track with maximum function. The vision was to create the ultimate race-focused MK2, but that dream extends much farther than the few months of hard work Kraftwerx contributed. Before they were given the chance to swap in a 3.2L VR6 from an R32 and stuff a GT35 turbo on it, the car had bounced around from shop to shop, never receiving the attention the owner wanted for it. Clearly, the owner’s decision to bring the MK2 build to Kraftwerx paid off. 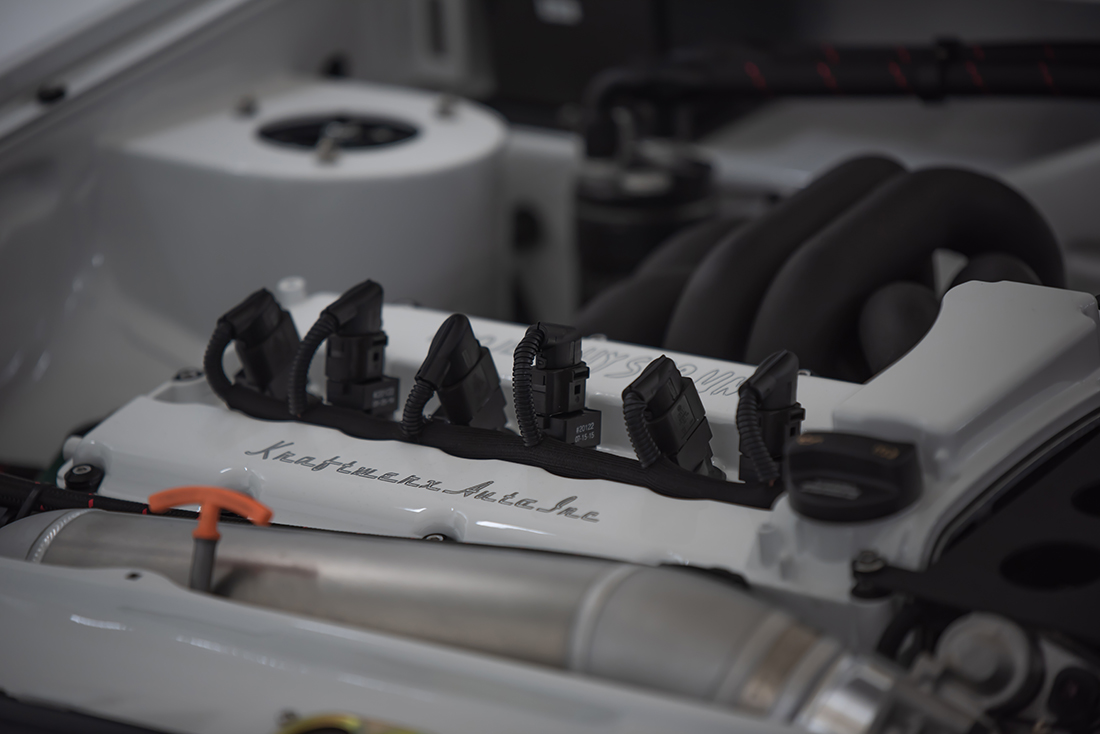 The car was completely stripped and resprayed white in their own brand-new paint booth while it sat perched on a rotisserie of their own design. From that shell, a MK2 Rallye was born. The front end was sourced from overseas while Pandem provided the ever-popular widebody kit. To finish the exterior, custom work was needed to fill in the gaps between the body and the new fenders to give the wheel wells a completed, nearly factory look. Adorning the freshly painted body are the expected sponsor’s decals, dominantly featuring the LIQUI MOLY race-inspired livery. The placement of the paid adverts gives the whole car a group-B feel, especially with the boxy, retro-styled, fenders and chunky rear spoilers that subtly protrude above and below the back glass. 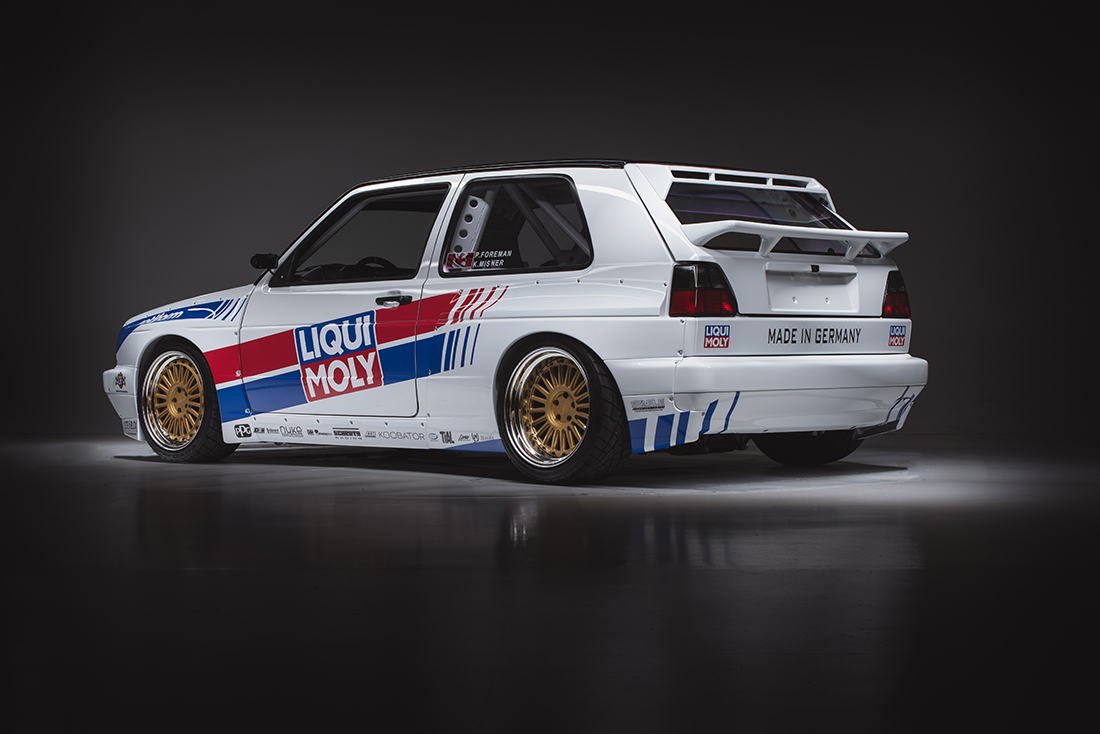 Looks, of course, do not make a race car. The 650hp VR6 Turbo heart of the car provides a hearty amount of power but is by no means a junkyard swap. Fit and finish is the name of the game when it comes to the most widely recognized show in the auto industry. A paint matched and custom valve cover jumps out amidst the shaved tidiness of the engine bay, where it is surrounded by a bespoke P Motorsports intake manifold and a wrinkle black turbo manifold filling the space between the engine and beautifully shaved firewall. Four sturdy polyurethane engine mounts keep everything secure in the bay and offer a splash of color contrast on the predominately white build. This extra-beefy mounting setup is required, as anyone peeking between the custom Rallye front valance and amazingly fabricated core support will notice dual oil coolers, an intercooler, and a radiator stuffed in front of the electric fans. The tight clearance gives the front a completed look from any angle. No space was left unused to provide as much reliability to the overpowered drivetrain as possible.

The insanity does not end with the incredible engine swap and body conversion. Underneath the car, which is operating room-clean, you find handmade and reinforced front control arms by Fabless Manufacturing, a six-speed manual transmission with a custom converter to a sequential pattern shifter, and the party piece: a driveshaft heading to the rear end where a 4motion Haldex differential is housed to transfer power to the massive rear wheels. 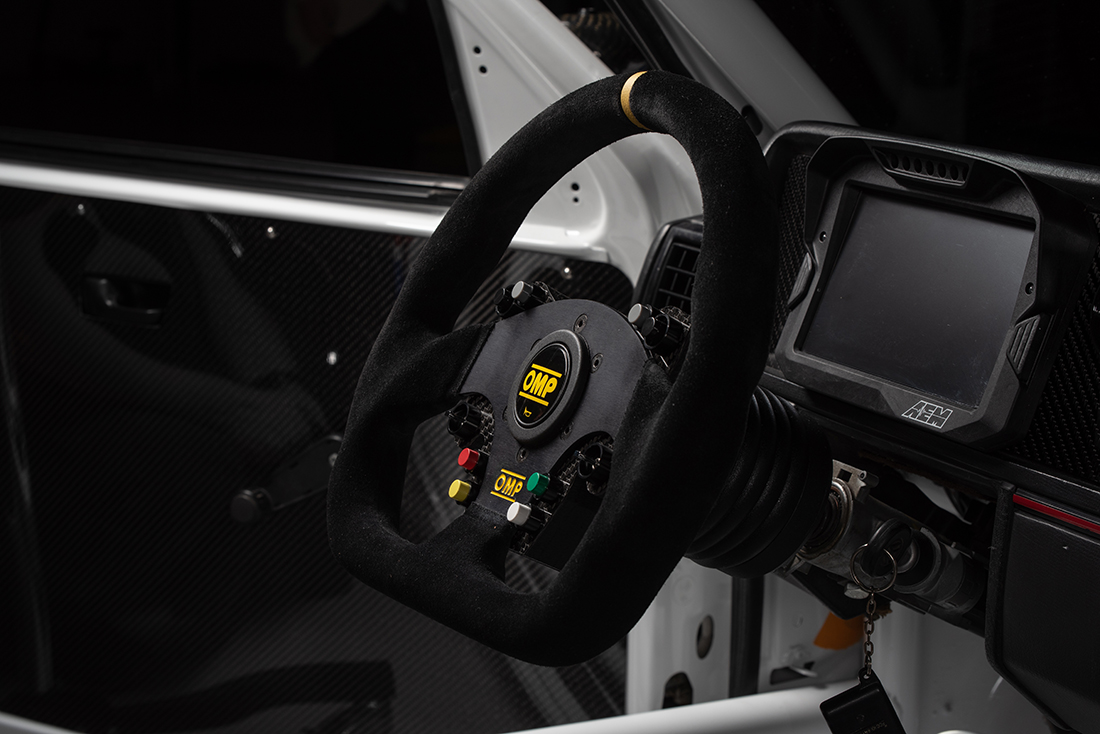 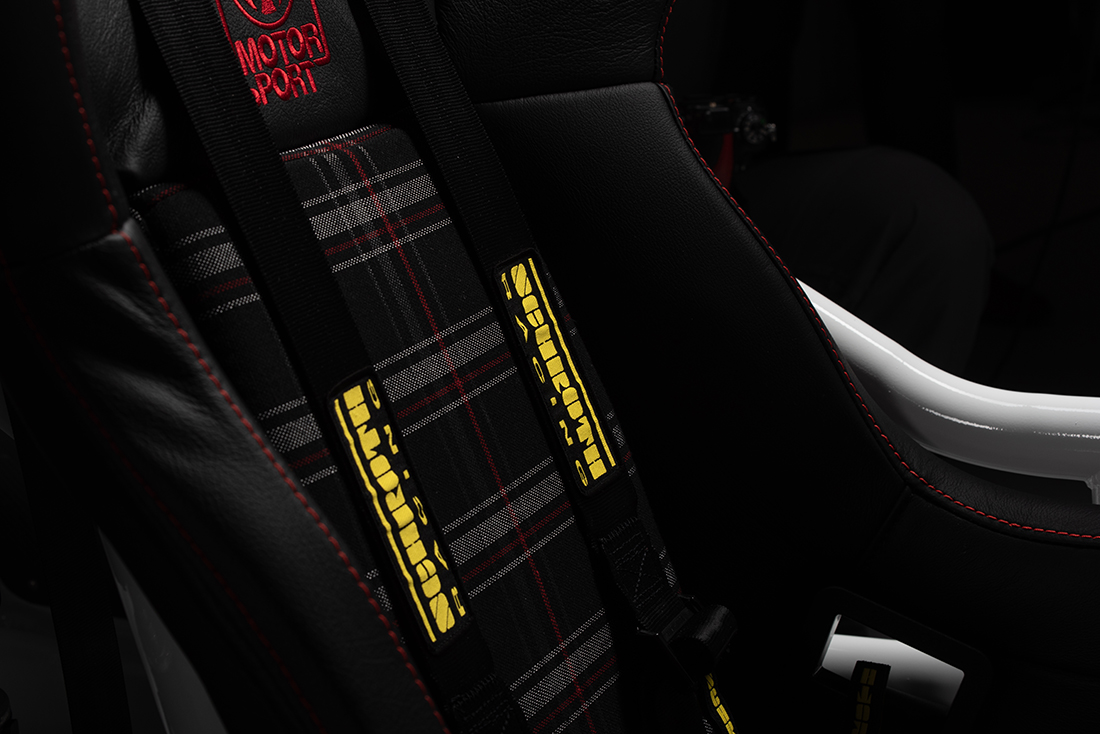 Speaking of wheels, brand new Rotiform three-piece wheels, in a staggered offset front to rear, are stuffed under the excessively widened arches. Wrapping the flat gold and polished wheels are TOYO Proxes in 275mm width all the way around for an aggressive, functional, and meaty appearance. Behind those gorgeous pieces of eye candy are absolutely massive Wilwood big brakes and custom Scale coilovers sporting Swift springs, an ever-popular choice for the track enthusiast with unsprung weight in mind. The coils provide the track-oriented stance and hover the car just millimeters above the ground, much to the dismay of the exposed wrinkle black oil pan and power steering pump that dangle delicately behind the front fascia. 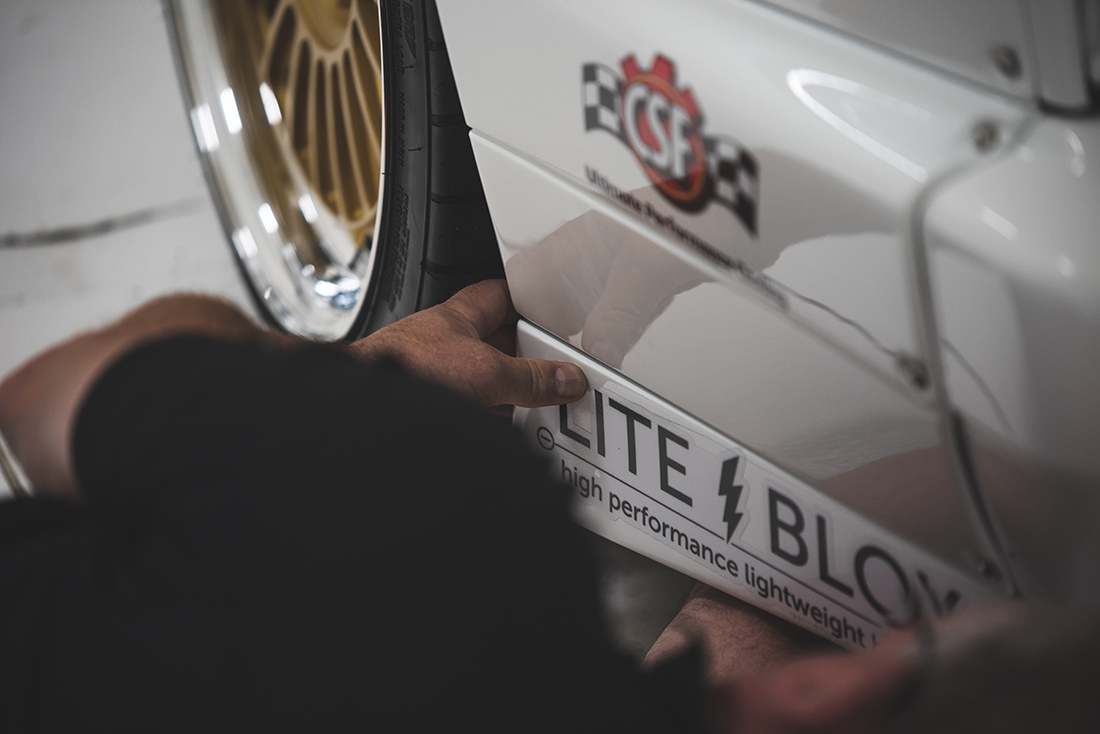 The magnificence continues when the doors are open to expose the spartan cabin. Inside the car, the centerpieces are gorgeous fixed-back buckets with paint-matched white backs and the iconic plaid center fabric, traditional to the GTI. A AEM racepak replaces the original cluster while the factory leather dash was retained to add a completed feel to the cockpit. An OMP racing wheel, sprinkled with multifunctional buttons and wrapped in suede, sits temptingly in front of the driver’s seat and gives the interior a focused feel. Moving rearward, a full custom cage protects occupants and provides an artful latticework of gorgeous welds and silky white paint to match the bare floors. No detail was overlooked, as the functional aspect to the build has always been the priority over anything, even SEMA. Lastly, for fuel, a custom surge tank and main fuel tank are expertly situated in fixed enclosures which fill in the space where the rear seats and trunk would have been. 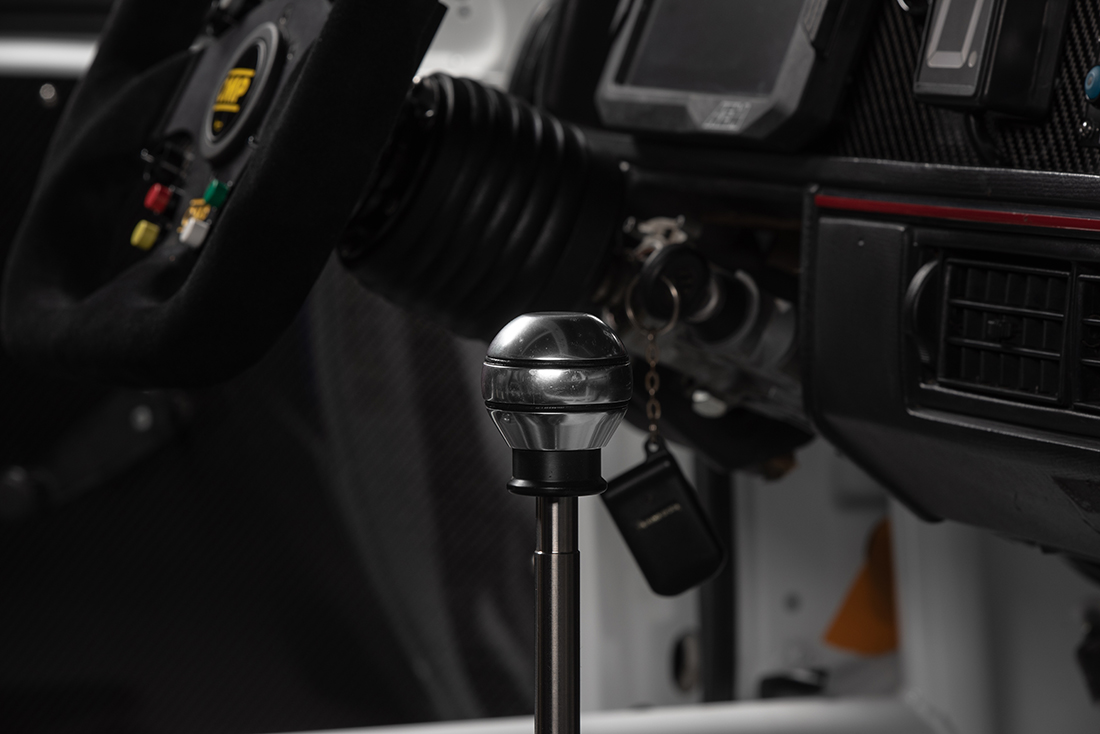 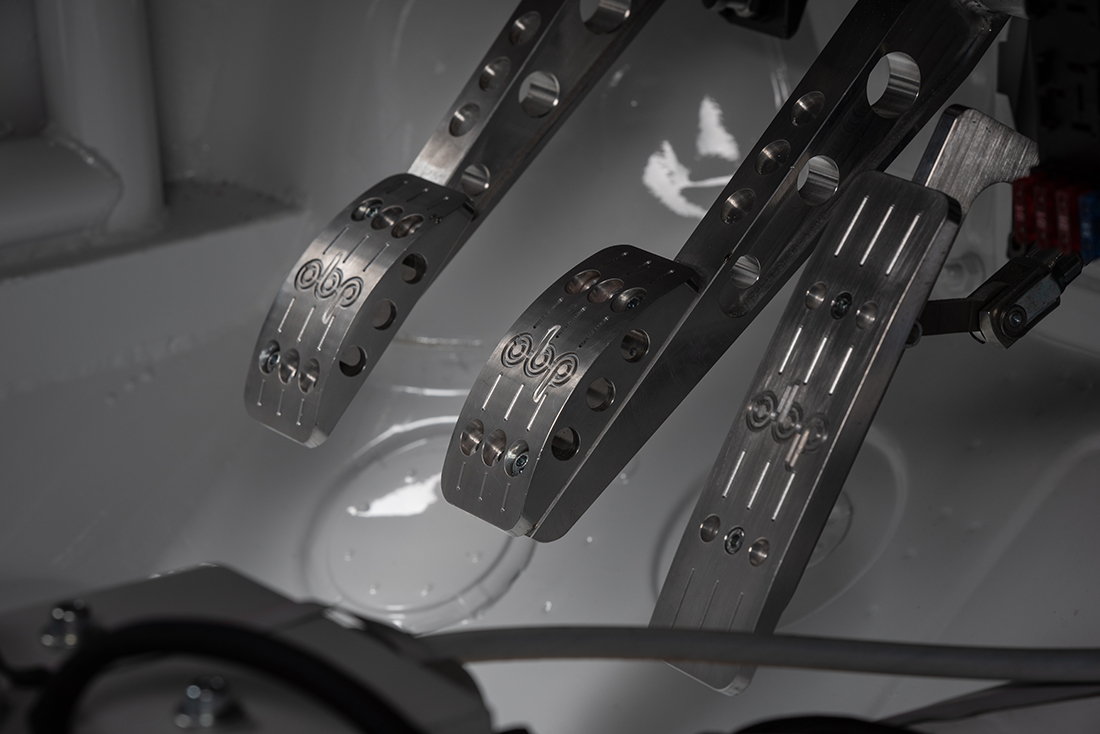 When you look at the Kraftwerx MK2 GTI Rallye, it is easy to be consumed by the details and forget about the whole picture. Blinking back to a more complete observational eye, the nearly finished product is astounding. The car has a presence that feels extremely serious yet somehow entirely unhinged. It is reminiscent of a pit bull who has yet to realize his body has doubled in size and strength but retains his puppy demeanor of playfulness that can verge on some rough and tumble antics. 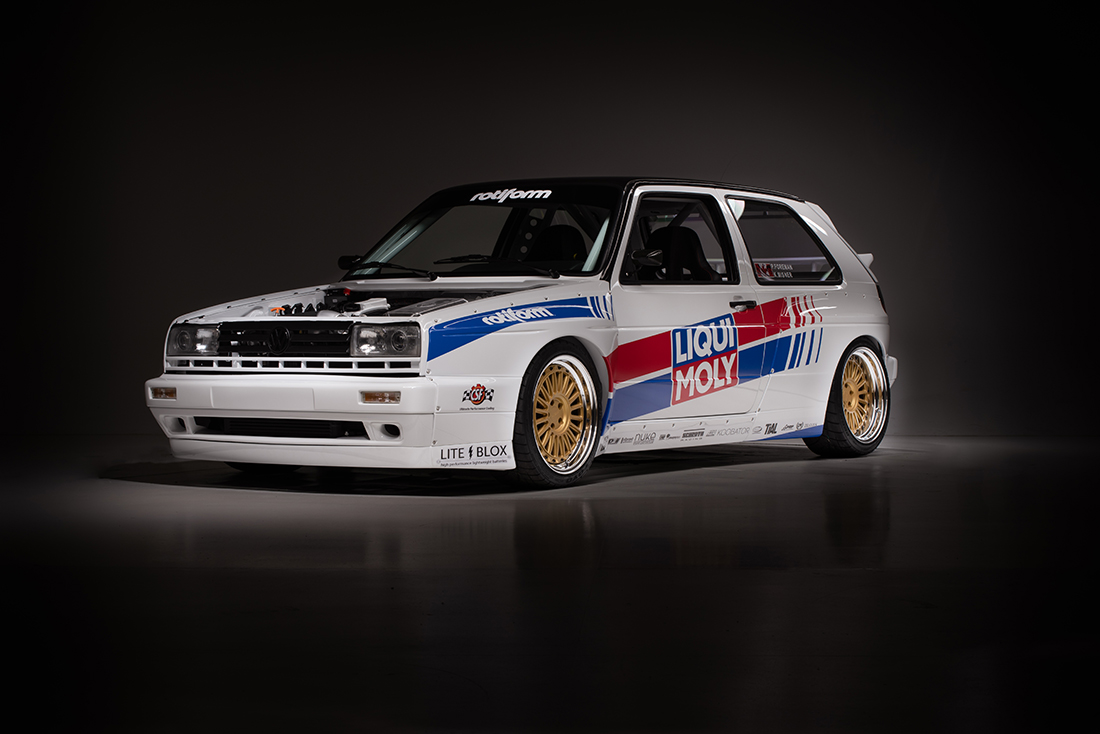 Kevin and his team from Kraftwerx Auto have built a one-of-a-kind MK2 GTI Rallye that truly offers inspiration to vintage European enthusiasts by showing off what a creative vision and dedication can produce. The level of execution in this build, from the pristine cleanliness to the AWD system and VR6 Turbo, offers a whole picture that evokes an involuntary emotional response from the audience. It is a greatest hits album that left nothing out, which is what SEMA cars ideally should be. In the case of this MK2, its flawless appearance is a perfect pair to the collection of the best Volkswagen has ever offered all in one place.

With the show concluded and the Kraftwerx folks back up North, the car will receive the last tidbits of work it needs to be delivered in the spring to its excited owner. We know that thanks to their inclusion this year at SEMA that Kraftwerx will be easily invited back next year to show off something even crazier. We can’t wait to see what they dream up this coming year. If it is anything like the MK2 GTI Rallye, we can be sure to expect amazing work displayed on a beautiful Volkswagen that mates modern performance capability to the ever popular vintage aesthetic.