The Pinzgauer: A Millennial’s Perfect Choice

Recently, we have been looking back in time rather than forward for successes in the past that outshine their contemporary replacements. Cars like the MK1 GTI, E30 BMW, and AMG Hammer are arguably more appealing than the current production models for their affordability and ease of maintenance. Part of the draw to these rad cars goes beyond their quirky social relevance: cars today are increasingly difficult to own and maintain without professionals and an excessive repair bill. The cost of upkeep on a five-year-old car drives many buyers to a lease on a brand new vehicle or purchase with the intent to sell within a few years. This makes the utilitarian aspect of owning a car from the era that brought us the Grateful Dead and late night talk shows incredibly sound. 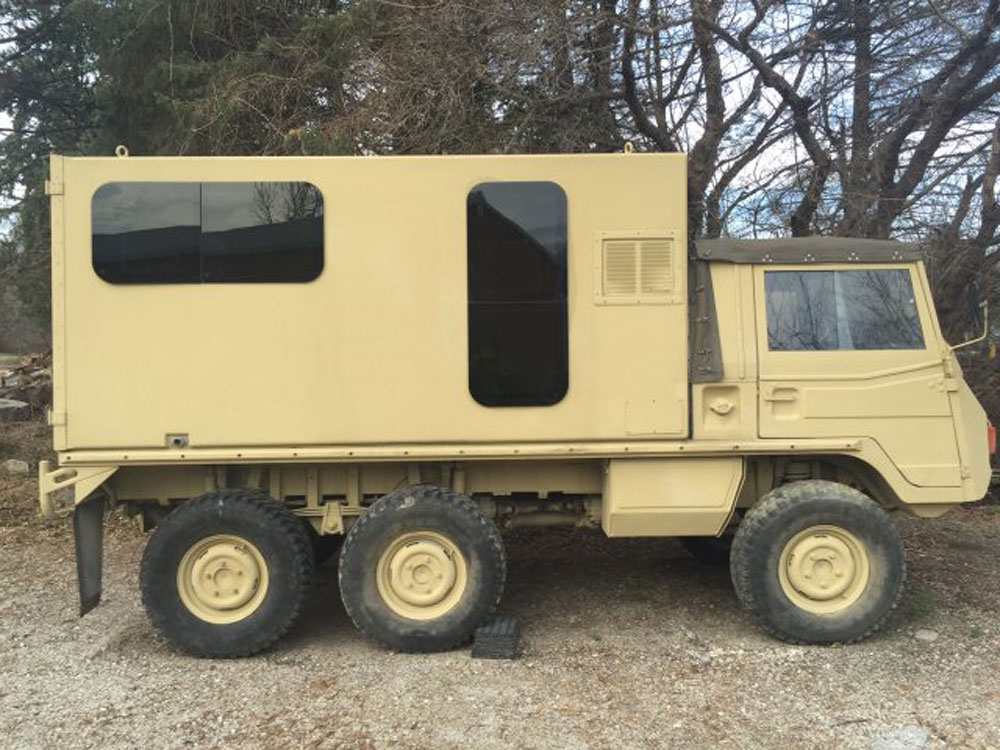 While we have scattered the board and covered several performance cars, the underlying aspect of practicality and durability has persisted as a selling point to a prospective vintage car buyer. The only logical next step is to push that envelope to the extreme and look at something from that time that has yet to grow in popularity to a degree of the other classics but completely embodies the unbreakable and function-over-form mentality. The Steyr-Daimler-Puch Pinzgauer is the all-out best purchase for anyone seeking adventure in the form of an indestructible off-road vehicle and practical daily driver.

In 1969, the world saw its first real musical awakening with the Woodstock festival in the northeast part of the United States. The establishment that those mud-caked, Country Joe and the Fish listening, chakra-aligners fought against were given the Pinzgauer. In the same spirit of ‘go anywhere, do anything’ that was favored by the free love crowd, the Pinzgauer was designed as an all-purpose troop transport military vehicle that was developed in several variants. 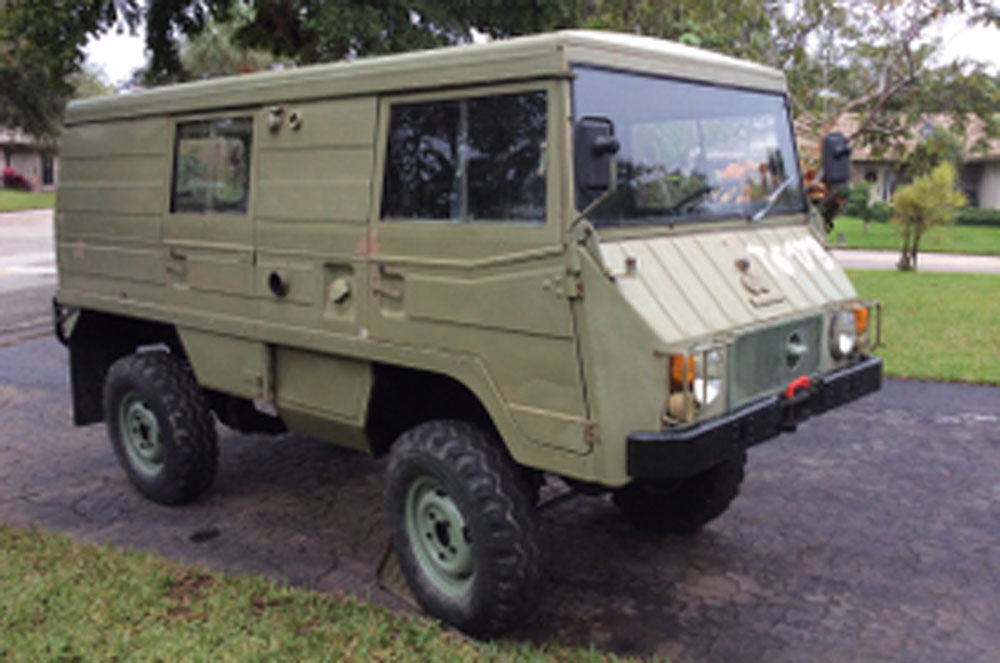 The Pinzgauer is praised as one of the single-best off-road vehicles of all time. Used by over 30 militaries worldwide since its initial production, the Pinzgauer remained relevant until 2009 and the design was purchased by many companies who continued manufacturing the behemoth. Even today, the relevance of a simplistic and durable means of transportation is still at the forefront of many buyer’s minds, but our technology dependence has favored new cars over their arguably more reliable grandfathers. In this case, we argue there isn’t a Benz available today with the same level of dependability and universal usability as a Pinze.

Available in 4×4 and 6×6 platforms, the variations of the Pinzgauer were all originally intended for troop transportation, equipment transportation, and various backcountry expeditions that make it an outstanding base on which to build your millennial tiny-home existence. All joking aside, the rugged, spacious, spartan aesthetic of the Pinzgauer makes it practical as a means of transportation, exceptional off-road, and usable for any degree of camping or off the grid living. 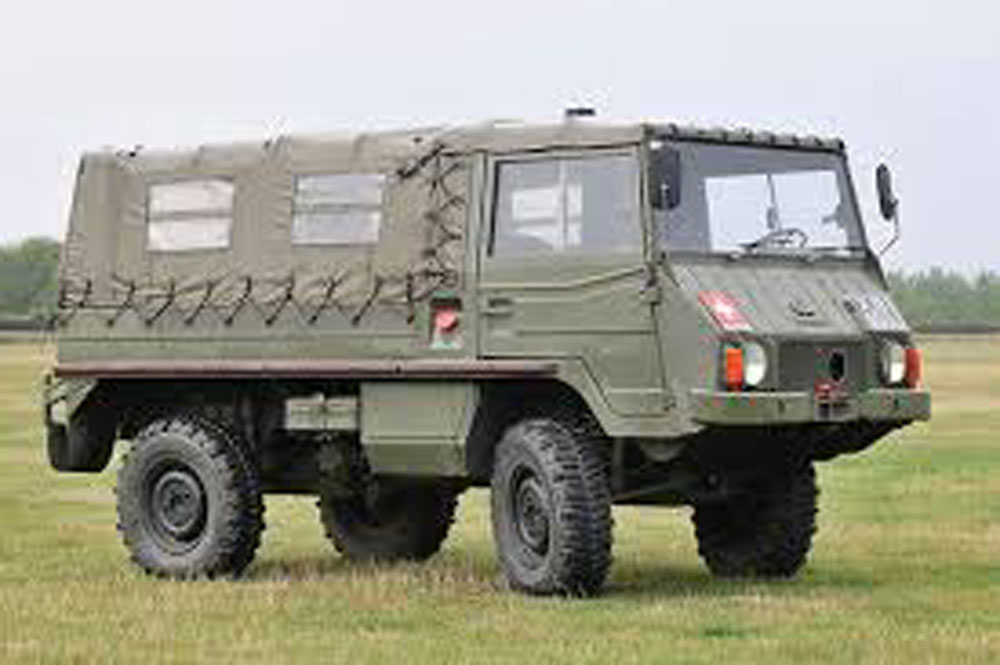 As a millennial with a taste for 80’s nostalgia and an affinity for being in the mountains, the draw is absolutely compelling for this writer. So much so that we found a relatively local importer of these vehicles who, like the few contemporaries in his field here in the states, provides decommissioned military Pinzgauers to the motivated buyer. Located in Wisconsin, North American Pinzgauer’s inventory features only Pinzgauers of varying models all outfitted for their different purposes when they were military vehicles, ready for you to turn into your tiny home, bug out vehicle, or just an addition to your vintage vehicle collection.

So what does this mean for the new vehicles that are equally attractive to someone with a little cash in their pocket and hopes for offroading? We say you should skip the Toyota or Rover dealerships and head straight to an importer of Pinzgauers for the ultimate in functional utility. While you may sacrifice turn-by-turn navigation, heated seats, and an automatic gearbox, what you gain is a vehicle with which you can rely on to take you quite literally anywhere with no complaint, ample space for your gear and friends, and a simplistic design that will never have you guessing what the next repair will cost. Our advice, if you are itching for that VW Vanogan bug, is to take the road less traveled. Find a Pinzgauer and fall in love. Dare to be different like the children of the 60’s from where this car saw its inception. Buy a Pinzgauer before the market goes all Air-cooled Porsche on them and you miss your chance at the life of freedom you have always wanted.

Images DO NOT belong to ECS Tuning or its affiliates. Images have been sourced from North American Pinzgauer’s for-sale inventory. Please follow that link for more information on their available units. Special thanks to the owner, Bob, for letting us use his images of his amazing stock of imported machines!