I have often been told that when searching for a Porsche to buy, that I should always look for the best example of what I want rather than to skimp out and go for the budget one listed as a ‘project’ or ‘ran when parked’ car. Mike, an engineer friend of mine, has a different mentality. He picked up this 1983 Porsche 944 for less than the cost of a keg of beer in order to have something ‘exciting’ to drive for the winter. When I first drove it, the car suffered from several faults ranging from mildly inconvenient to downright unsafe. Now, after a few months of some hard work, Mike has once again handed the keys over for me to experience the oddest 944 I will probably ever drive. 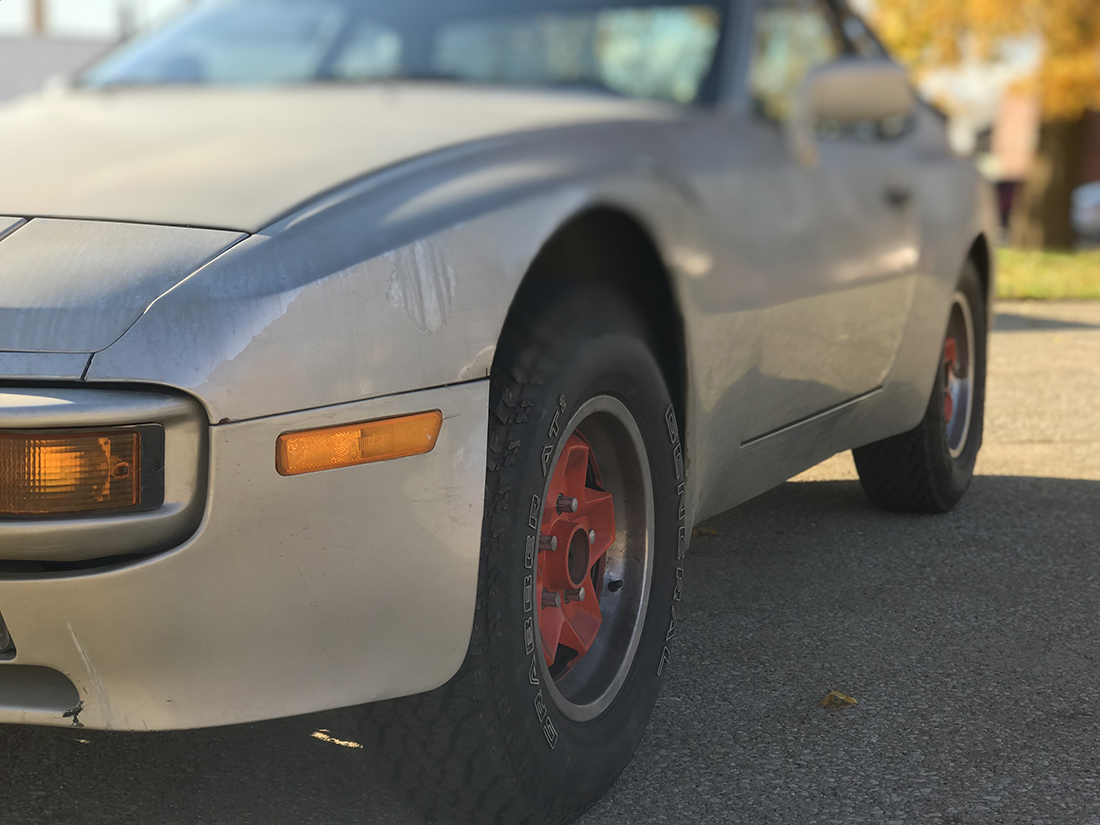 It is hard to miss the external modifications Mike has made on his winter beater. The car, of course, received attention where it needed before the absurd suspension modifications were made. Previously, the car’s engine felt ready to shake itself out of the bay, the transmission felt ready to explode, it offered a host of curious smells that occupied the interior, the brakes barely existed, and the suspension was so poor I was afraid to drive it above 35mph. Fortunately, Mike addressed most of those issues.

The 944 went under the knife shortly after my first drive in it. Meticulous service was performed, including new brake components, various gaskets, fluids, mounts, and bushings. In his shop, Mike designed and hand-built control arms that offer greater rigidity and a wider track. Those custom arms were powder coated metallic blue with silver flake and were paired with his one-off long travel coilovers to accommodate the beefy all-terrain tires stuffed under the widened fender arches. Clearly, Mike didn’t want to risk being stranded in winter conditions, as this 944 now feels ready to plow its way through snow-covered streets. Or a hoard of post-apocalyptic wasteland marauders. 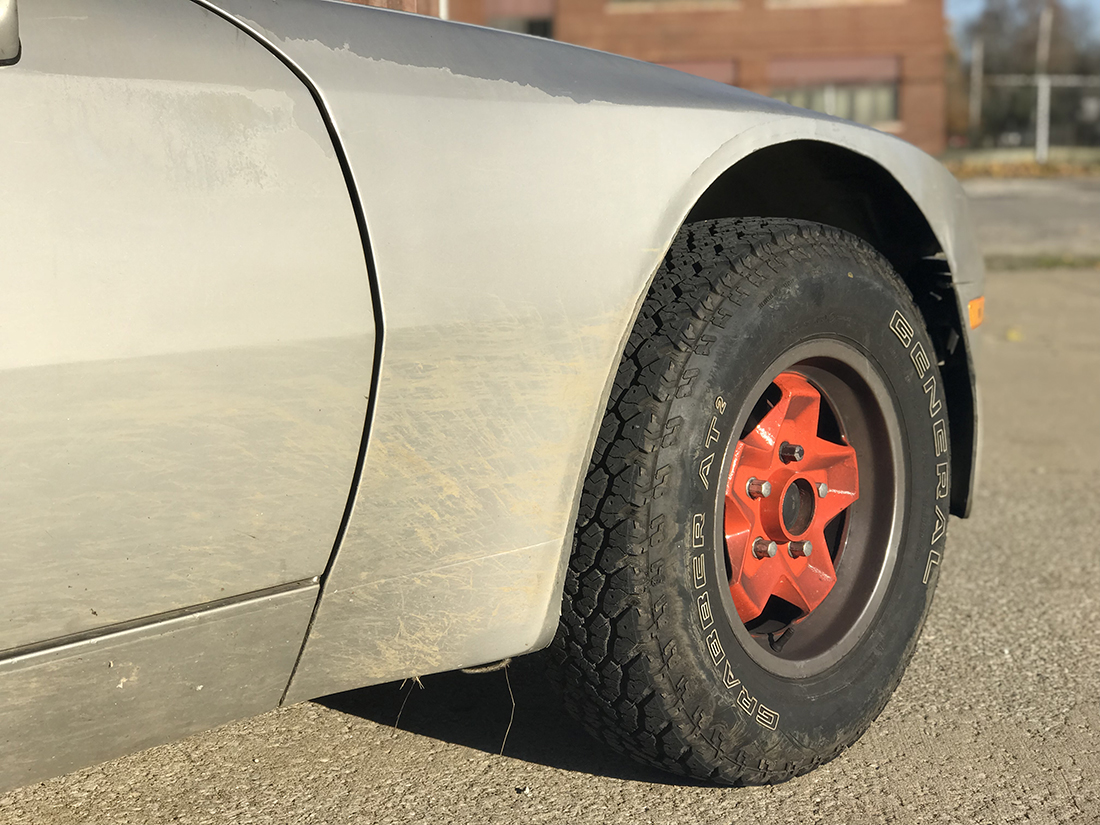 I excitedly took the keys from Mike and hopped in the now much taller Porsche for the first time since his exhaustive overhaul. The car still smells funny, but now it is more spray paint and less burning fluids. Maybe the burning fluid smell is still there, but my olfactory sense can’t distinguish it from the nostril-singing aroma of Krylon. Leaving the parking lot, I could immediately tell this was going to be a ‘windows down’ drive.

With the Porsche on the road, I noticed an incredible difference between this drive and the first one I took a few months back. Before, the nonexistent suspension made driving the car borderline dangerous. That danger was exponentially increased thanks to its lack of brakes and an alignment that made the car feel like the left and right halves had different ideas of where to drive. Now, the firm long travel suspension and fresh alignment gave the car more enjoyable characteristics. It drove straight, ate up the bumps and dips in the road, and actually inspired confidence as I took it through some corners on the rural back road route I chose. 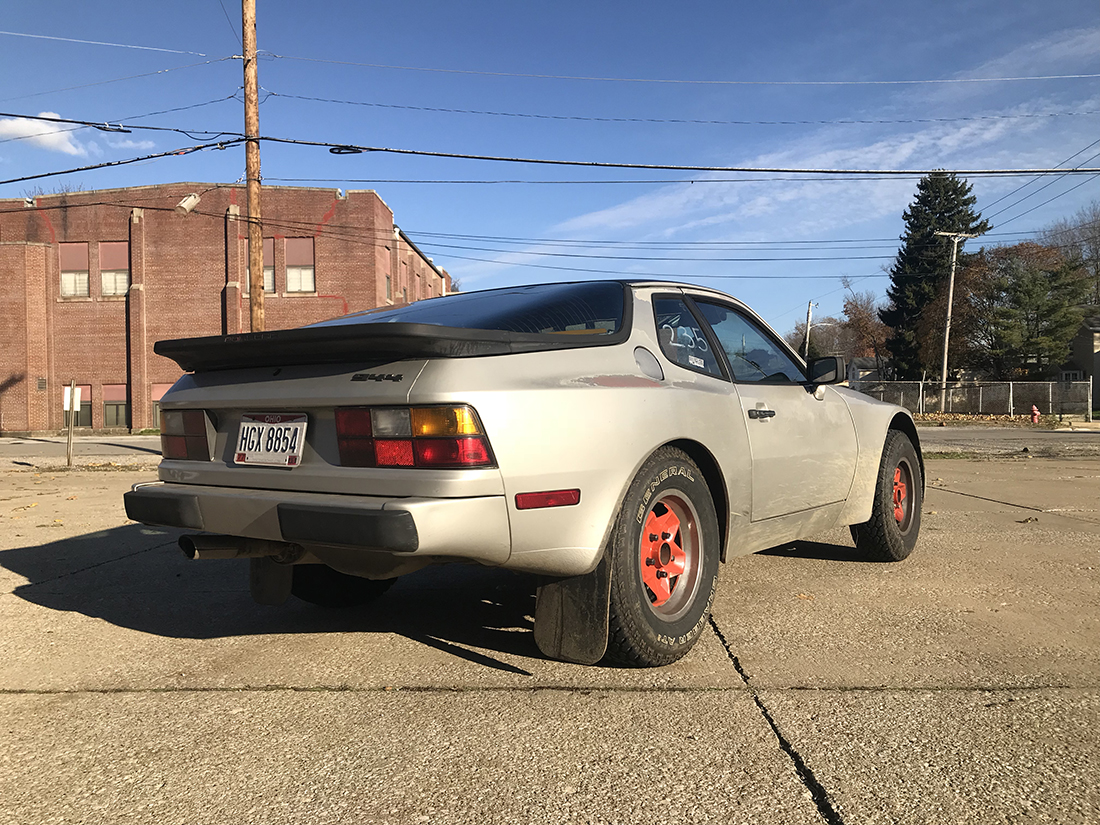 When I say the car felt better to drive, I mean it felt better than driving something that actively wanted to harm me. It no longer shoved threats of death in my face, but it still carried a gun on its hip with the safety off and liked to remind me that its trigger finger was its safety. This sensation was entirely appropriate, as I drove it through some one-horse towns out past farmland here in northern Ohio. The road was shared with tractors, lifted jeeps, beat up work trucks, and lots of stocky folks in camo from top to bottom. The scene is not one in which I generally find acceptance, but in this lifted Porsche covered in mud, I seemed to have better camouflage than many of the second amendment enthusiasts by which I was surrounded. 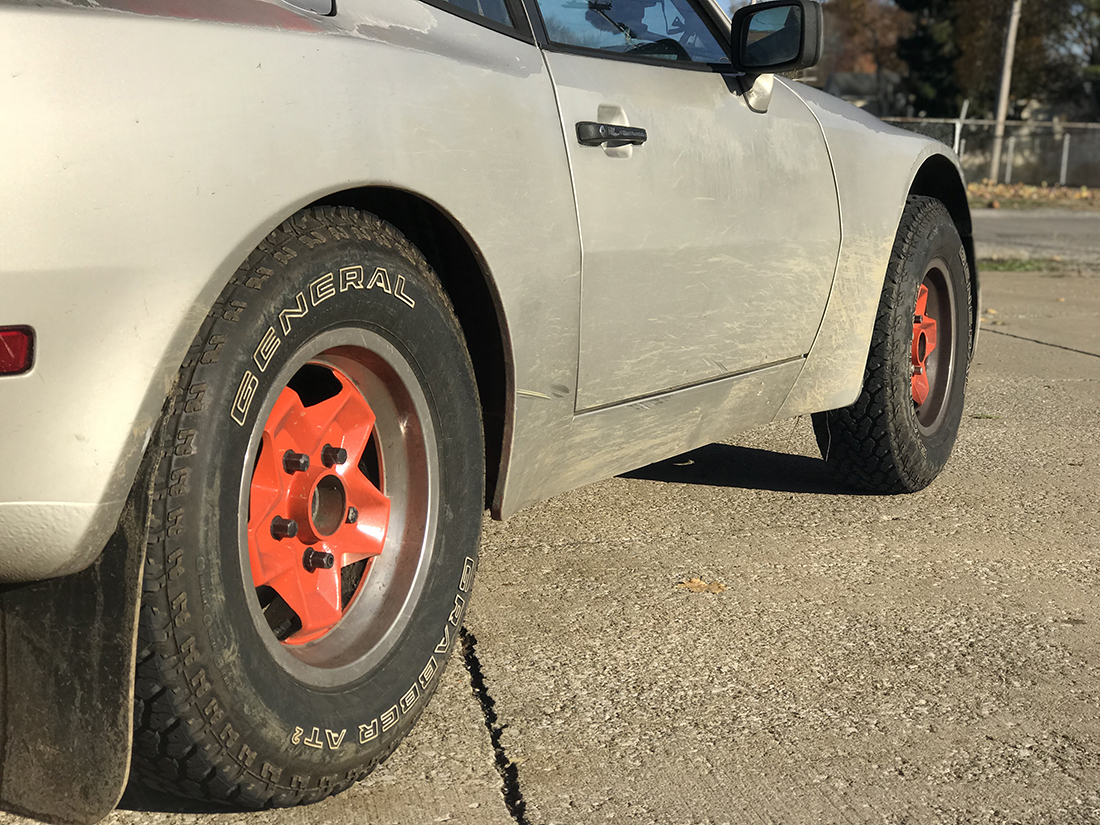 If you want to feel like a celebrity in a small rural town, lift your Porsche. Constantly I noticed pickup drivers and townsfolk double-taking at the oddball 944 sporting tires they probably use on their Dodge. What’s more, the car still drove like a beat up old farm truck, but now it was intentional. When I last drove the 944, I compared it to that truck that every hunting family has. The one that sits down at the hunting cabin, has never been serviced and is just barely functional enough to trundle you down a trail to the blind. This Porsche would be perfectly comfortable doing the same, but you could enjoy some tank slapping drifts in the dirt or gravel while your cooler of beer bounces around the spacious rear hatchback. I made a mental note to consider a Porsche as my next hunting vehicle. 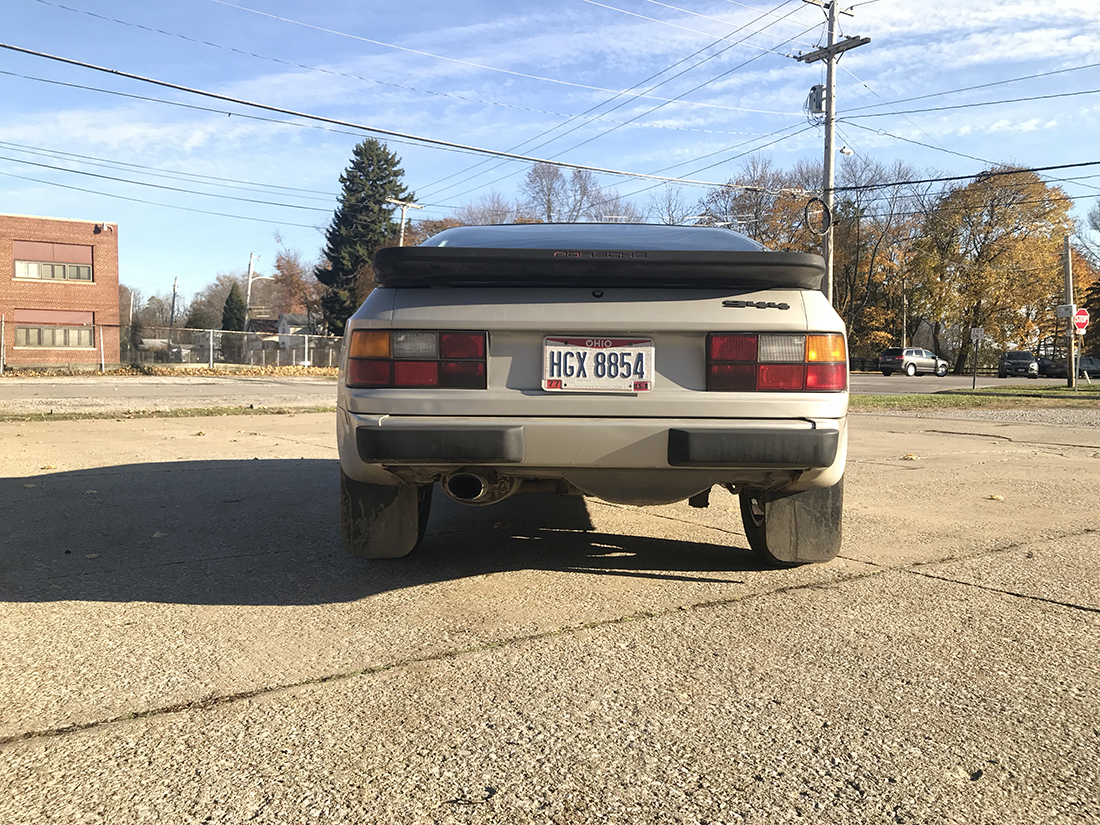 With the beefed-up suspension and go-anywhere tires, I actually wished it was a raging snowstorm, where I felt the car would behave its best. Driving in the dry conditions, I was able to be aggressive with it for the first time. That is to say, as much as the transmission allowed. As I mentioned, my first drive in the car gave me concerns that the transaxle gearbox mounted just behind the driver’s position might send bits of exploded metal through my backside. Now, after Mike has done a considerable amount of work to the car, I still felt that way. He has yet to address the transmission issues, so I was careful on my shifts as I tried to take the Porsche through its paces to understand its newfound capabilities. Every shift into third gear evoked a scrunched up facial expression as I waited for the anxiety-inducing crunch upon engagement. 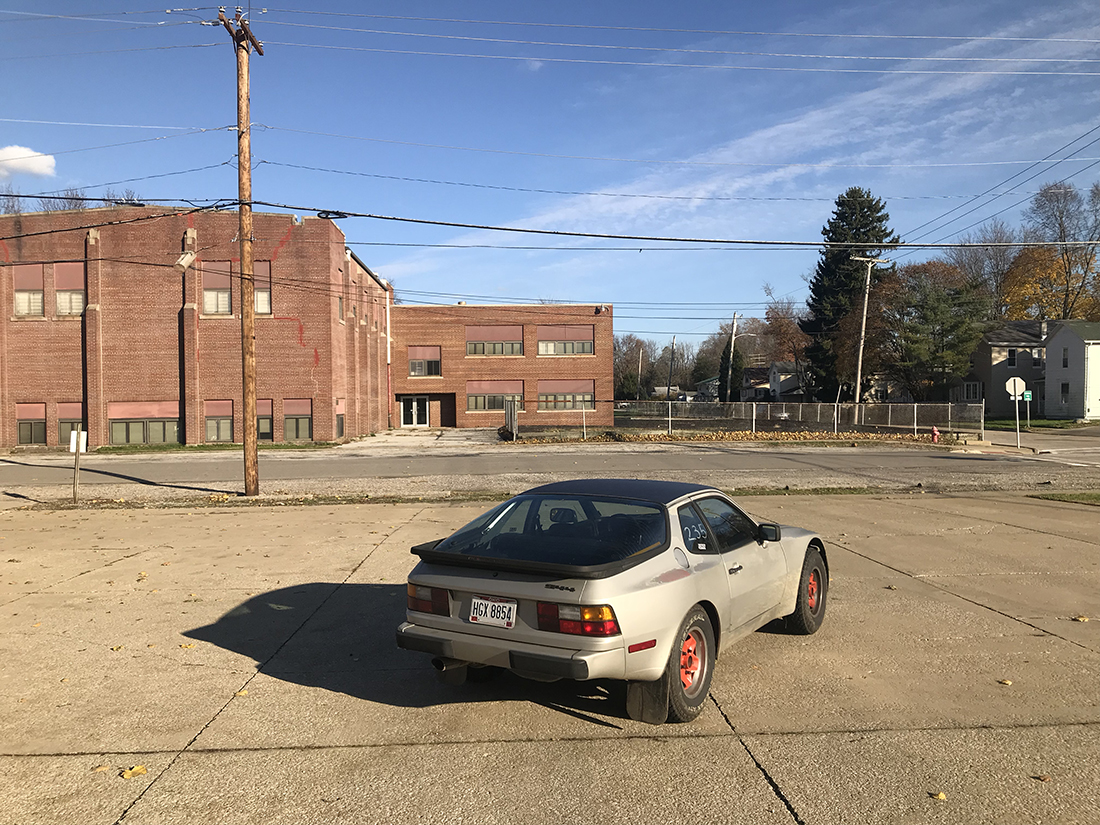 Hauling down the back roads, I definitely channeled the spirit of Mad Max. I imagined myself in the Interceptor chasing down the Night Rider. Part of me wanted to find a dirt road, but my conscious stepped in to remind me that while the old 944 may be a beater, it wasn’t my beater. It sure made me wish it was, though, which surprised me considering my opinions of the Porsche 924 and 944 chassis. 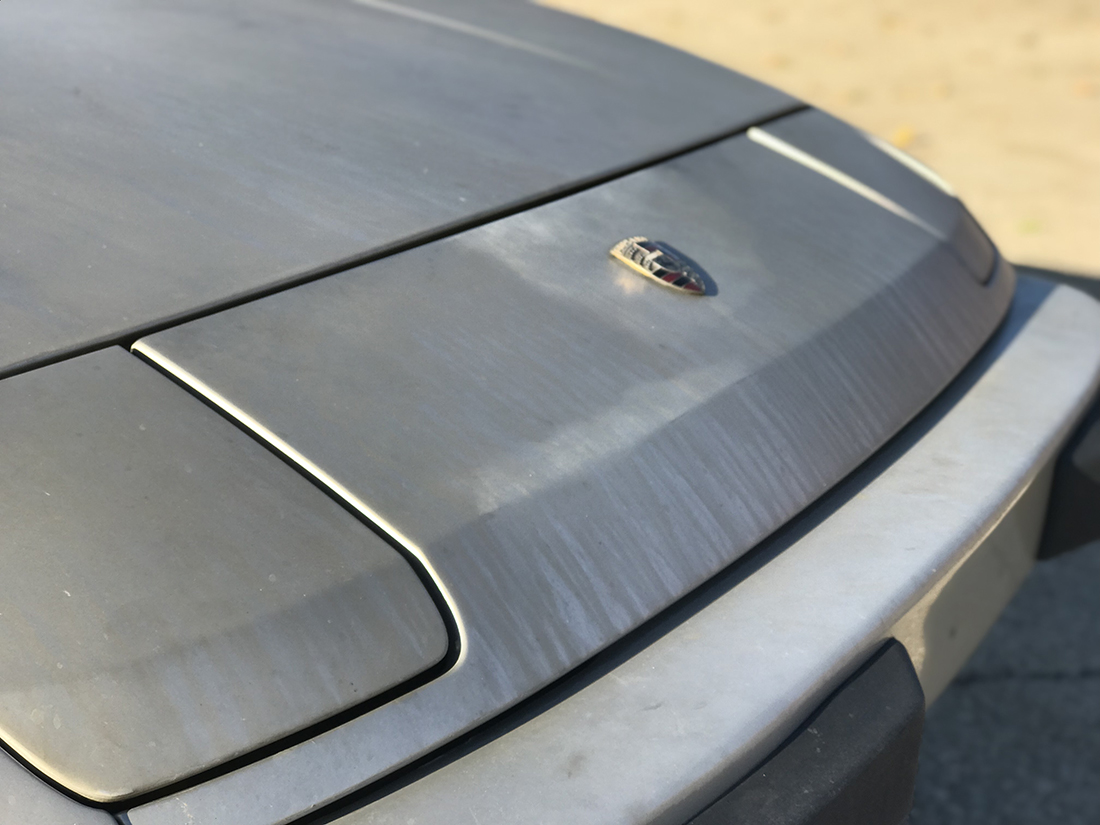 What Mike has done is actually made a Porsche 944 that put a smile on my face to drive. The absurdity of its off-road suspension and tires effectively transformed the car from a clunky, barely drivable, heap of an 80’s mistake and turned it into a clunky, barely drivable, lovable rally car. With beefy tires and a go-anywhere attitude, this 944 is sure to provide more than enough excitement for Mike this winter as he will surely take advantage of its newfound confidence in the face of inclement weather. I am itching with anticipation to see it hoon around in some snow banks and when it does, you can be sure to find out about it right here.