Generic clichés are generic because they are so frequently used. One we enthusiasts are familiar with is the timeless classic “hard work and dedication is all it takes to be successful”. It is often the case in the car community that projects start and are never completed or that something somehow impedes us from finishing our goals. A benefit of working in the automotive aftermarket community is that you have many opportunities to meet people who share your passion and have followed through with their ambition. Andrew is one such passionate individual who is a shining example of dedicated discipline and enthusiasm that has resulted in an incredible car with an inspiring driver.

Andrew first contacted me four years ago while I worked for an equipment company where he inquired about some wheel and tire equipment. Upon further conversation, it came about why he was interested in purchasing commercial equipment for personal use. Andrew spends his time much the same way many of us do: underneath his BMW E46 M3 or slaying tires around a drift course. Being a BMW enthusiast and collector myself, Andrew and I were able to find a common connection and enjoyed a fantastic conversation about his plans for the E46 in his garage. When he told me what his build was going to be, I became incredibly excited and the phone call quickly excluded any talk of equipment purchases and transitioned exclusively to speaking about his idea.

Since that conversation, Andrew has entered his second year of competition with the M3 we spoke about those few years back. Recently, I was able to catch up with him after his last event to speak with him more in-depth this time about the whole build. His BMW E46, which you may recognize from “The Smoking Tire” or from various features in print and online, is quite the melting pot of fandoms. It actually started life as an E46 330i but an LS-swap, a complete facelift with genuine M3 body components, and several other pieces of the car transformed it into what you see today. In our latest conversation, Andrew took me through the entire history of this unbelievable build. 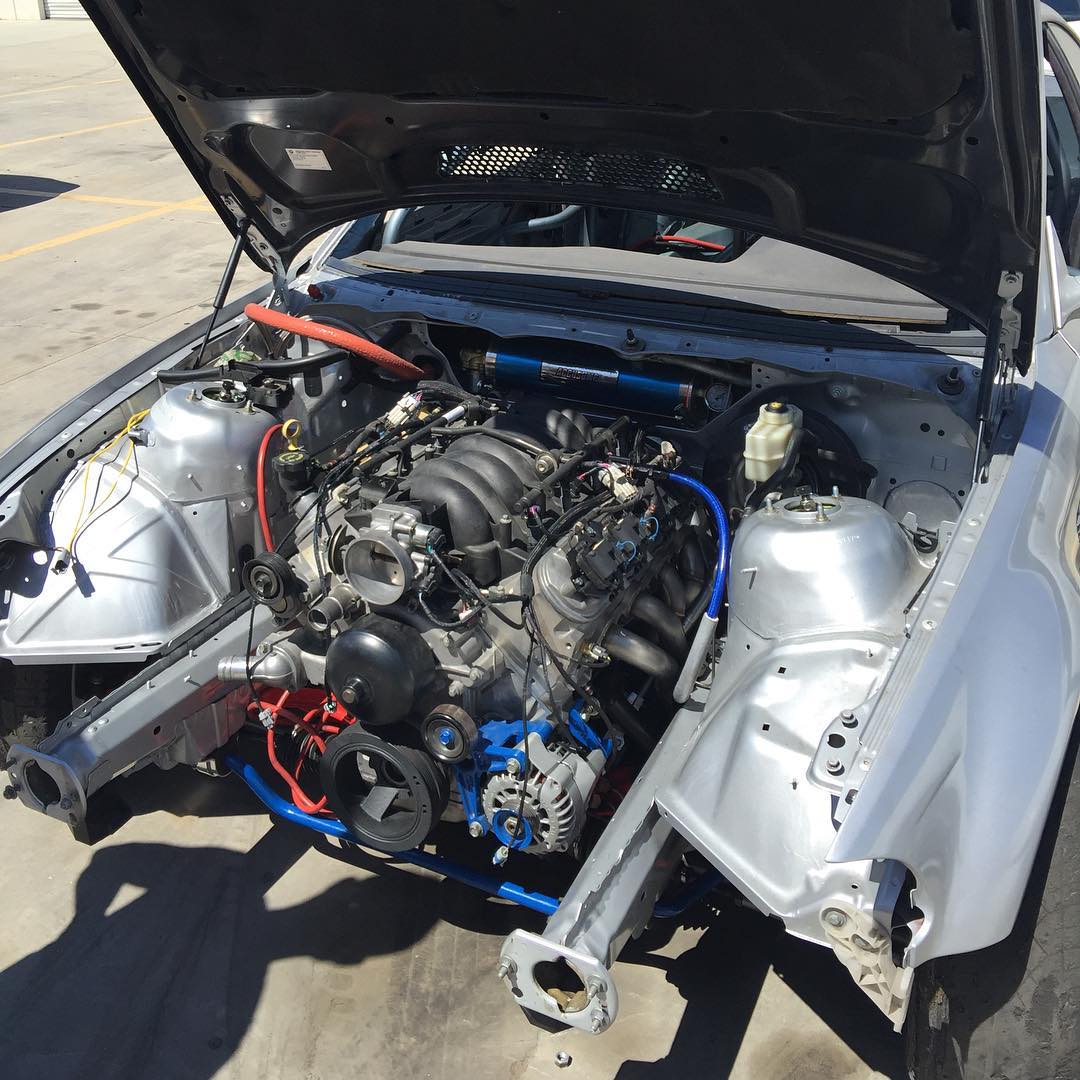 Before the monstrous M3 was sliding around with an aggressive livery and covered in sponsor’s decals, it was sitting at a friend of Andrew’s with a blown up M54. Andrew was driving a z33 350z he had built as a show car, and barely driving it at that. After an unfortunate collision on the freeway that sent his car into an uncontrollable spin, he made up his mind that he wanted to learn to drive a car more seriously and in his words “I wanted to be able to control a car that is out of control”. It was after this crash that he would dive headfirst into the world of drifting and the adrenaline addiction it becomes.

Andrew purchased a 240sx for little money (before the drift tax) and decided to begin building something he could be more relaxed with behind the wheel. He had known drifting would be his sport of choice since a young age. In the early 2000’s, Andrew worked at a motorsport event and experienced drifting for the first time. He was instantly hooked, but it would not be until he purchased the 240 that he would begin to hone his skills on the track. Unfortunately, or fortunately, in this case, the 240 had other plans for being the car Andrew would be known for and made the choice to set itself on fire. After the 240 burned, an LS engine and manual transmission he had intended to drop into the 240 would need a new home. They found their home in the blown up E46 that was still for sale sitting a few miles away at his friend’s house. A quick drive with a trailer found Andrew returning home with his ‘new’ BMW and his pocket a little lighter.

With the engine and transmission already in his possession, his idea came together quickly. The implementation, however, would take much longer. He knew the LS would power the E46, but did not have any immediate plans to go full-on competitive with the car. The intent was to budget around $5k for the build, drop the engine in, weld the diff, and get sideways. A local fabrication shop designed headers and motor mounts for the swap, but when the motor mounts didn’t fit and the engine had to wait for its new home, things began to ramp up quickly for the E46. An SLR angle kit, OS Giken LSD and clutch, and several other highly competitive parts found themselves in the car, which inevitably leads to countless other racing-specific modifications. As is a common occurrence when building a car, a number of unplanned additions made their way into the build alongside the original ideas Andrew expressed to me about the car. 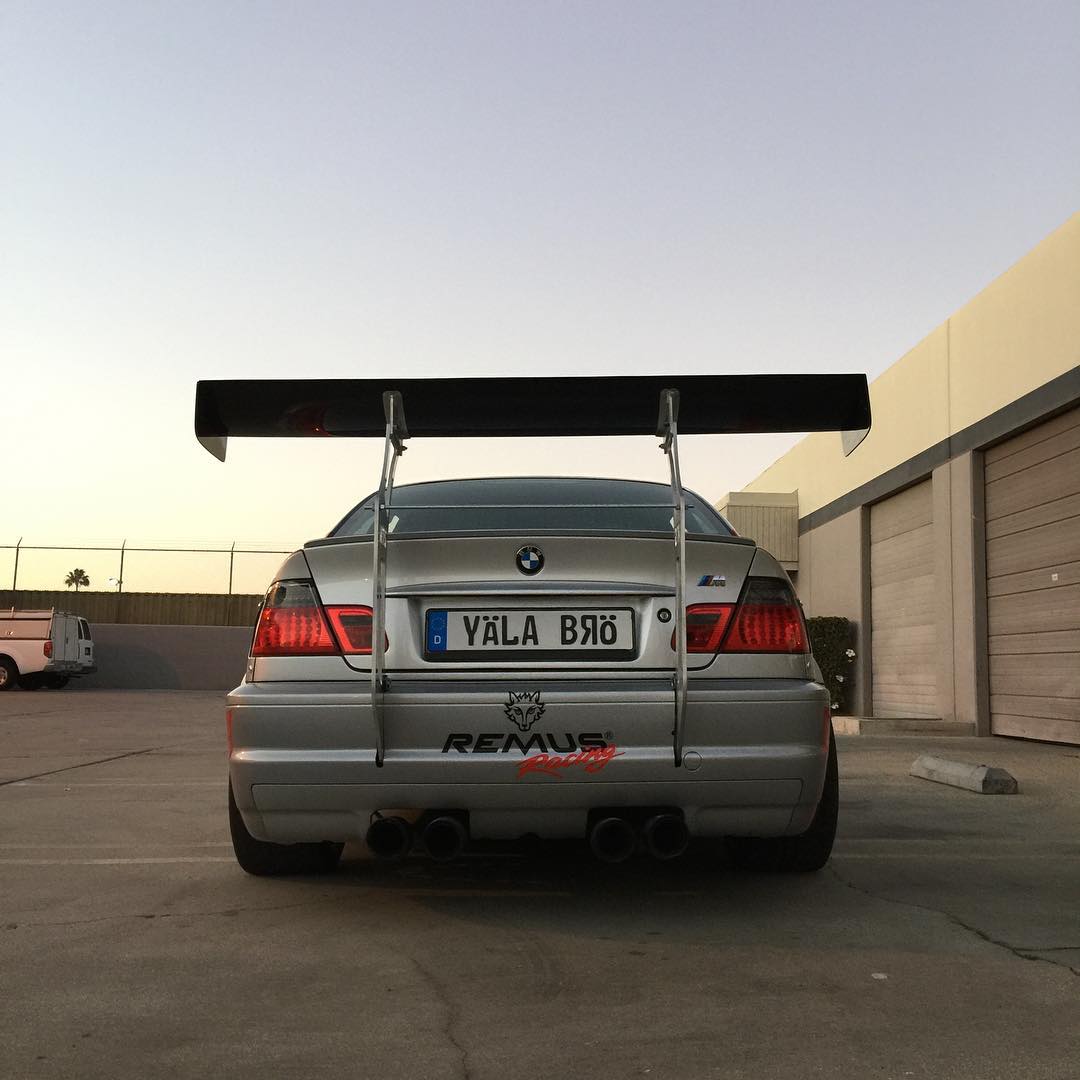 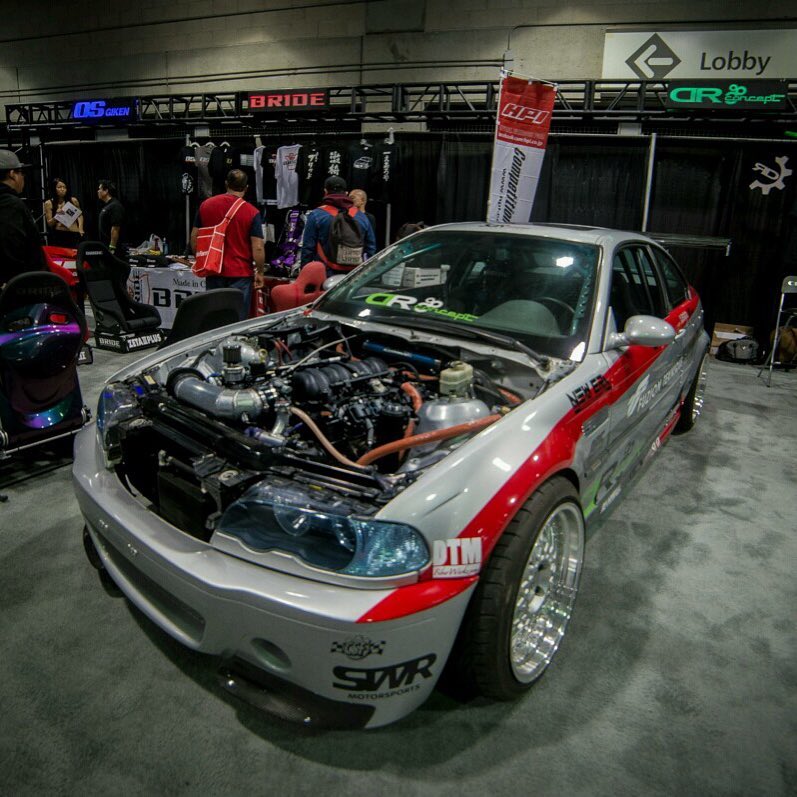 “When it came to the body, I didn’t intend to swap to the M kit. I actually found a friend who widebodied his E46 M3, so I was able to source all the front M body pieces for just a few bucks.”

With the front end completely converted and the beefier fender arches allowing for the extra width from the angle kit, the rear needed the same treatment. Andrew actually purchased a totaled E46 M3 and had a shop make molds of the rear quarter panels to make overfenders that would match the aggressiveness of the front end. Finally, the real M3 trunk (still sporting the badge, for which he receives quite a lot of disdainful looks from purists) and an M3 rear bumper on a quick release to his custom bash bar were installed on the E46 to complete the transformation. 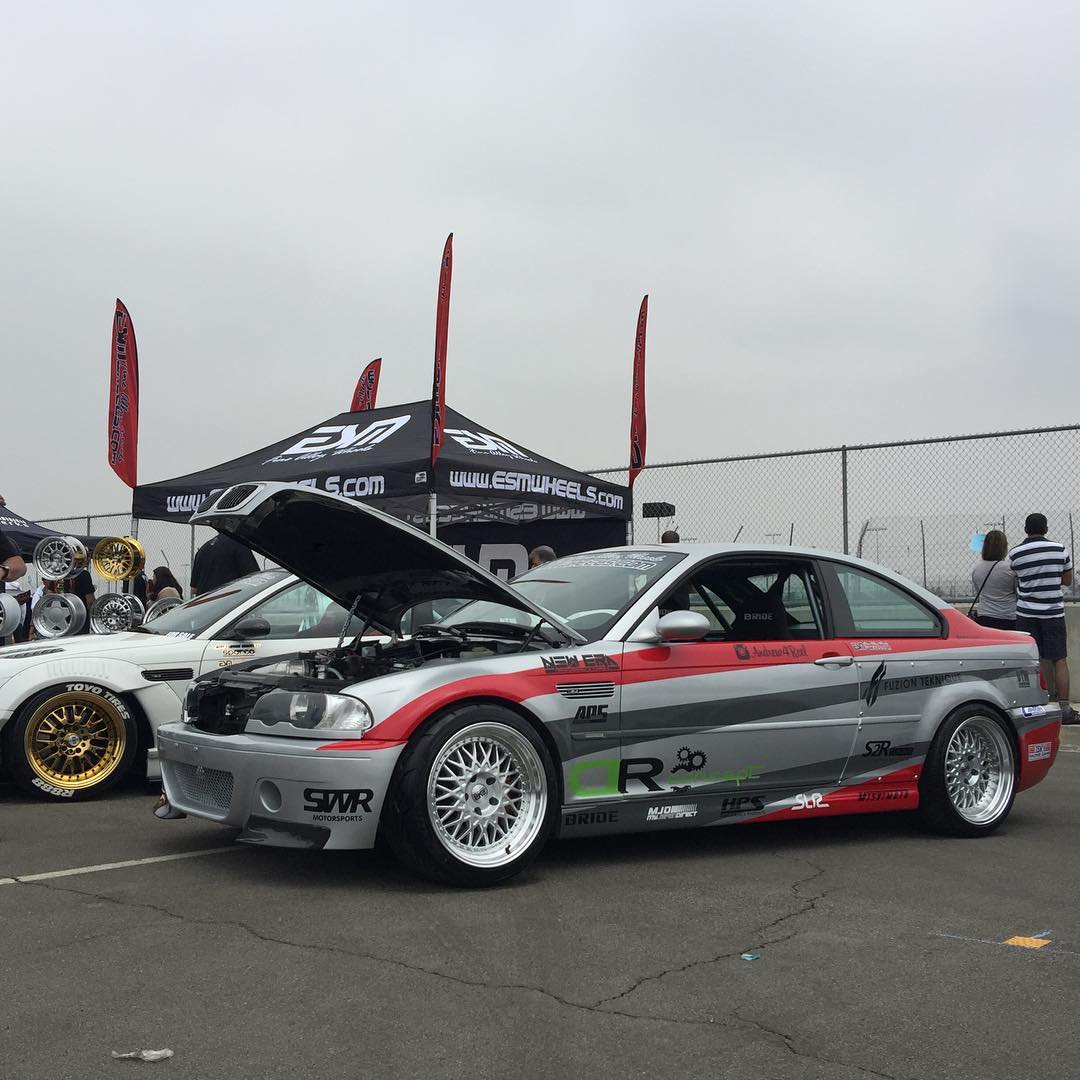 Before the build, the amount of fabrication needed was minimal and was to be performed by local shops. As the build progressed, Andrew began learning fabrication for himself. He designed his own cage and several other components on the car out of necessity as the project became much more seriously involved, while DR Concepts took care of a few of the more difficult parts like the bash bar mounts.

After the car had been stripped and almost completely rebuilt with new coilovers and other suspension components alongside the extensive modifications, the motor mounts absolutely needed to be finished. A few months of back-and-forth and a handful of shops later, the E46 finally received the attention it needed and engine arms were designed that fit and allowed the engine to be dropped into its final resting place for the build to be completed.

The modification list for the E46 is more than just extensive: Andrew built this car by tearing it down to a shell to the finished product you see here. Most impressively is that he did the vast majority of the work himself out of necessity. Many of you can relate to his decision based on the sheer cost, but it is still a testament to the concept that this sport is not out of reach to those who are committed and dedicated enough to dive into the opportunity head first. 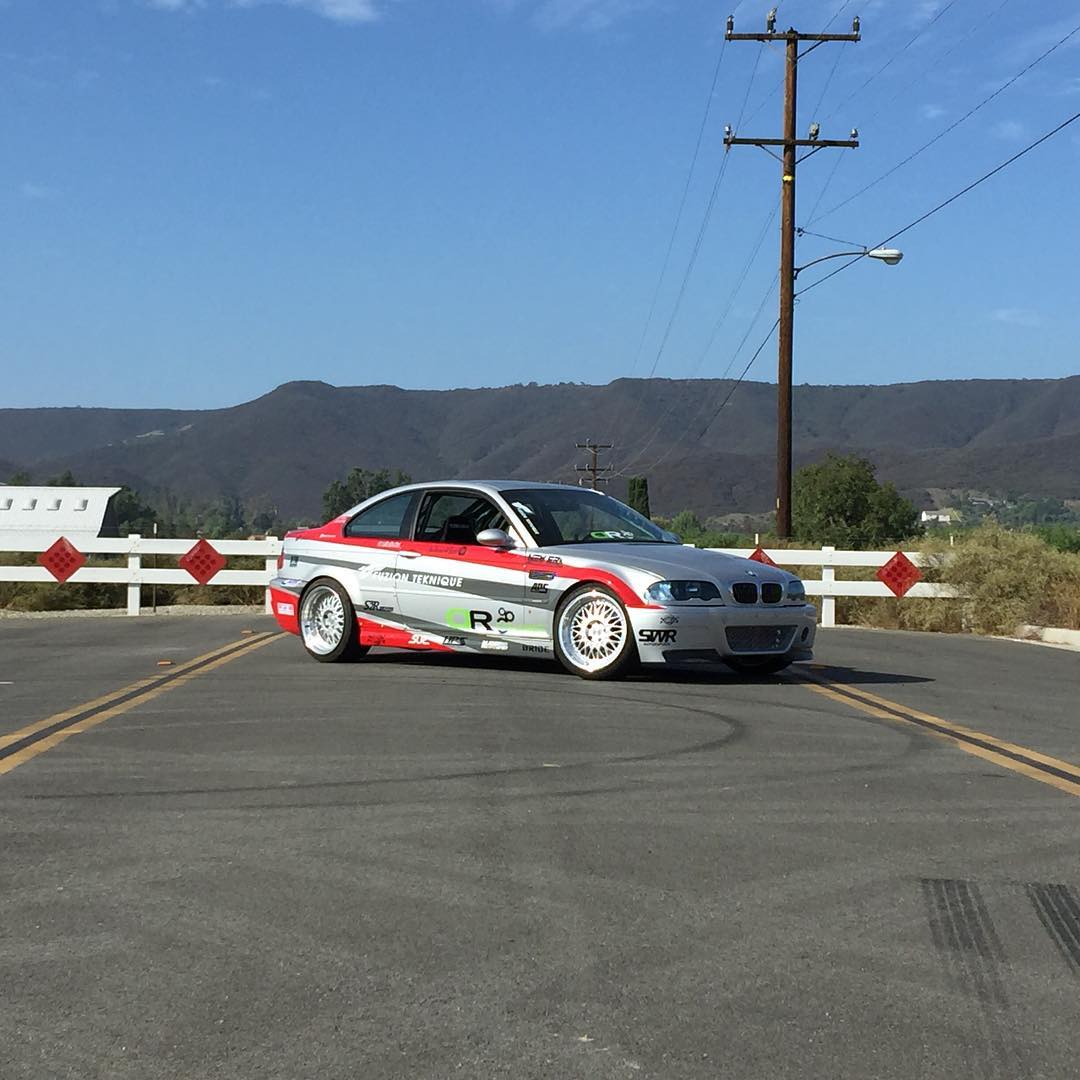 “This was supposed to be a $5k project, and it just got out of hand. I ended up deciding to do it right. Fortunately, since the E46 was complete and in good condition, parting it out allowed me to make most of my money back.”

Finally, after well over a year and a half building the car and nearly three years since he had competed in any drift events, Andrew was able to drive his fresh LS-powered E46 M3 drift car. The livery and finishing touches were completed for the Bimmerfest 2016 debut with quite literal minutes to spare. The morning of that show saw the final completion and a rushed drive to the event. Since that debut, the car has exploded in the BMW community, drifting community, and even the LS muscle car world, having been present and competitive at Holley’s LS-Fest West. 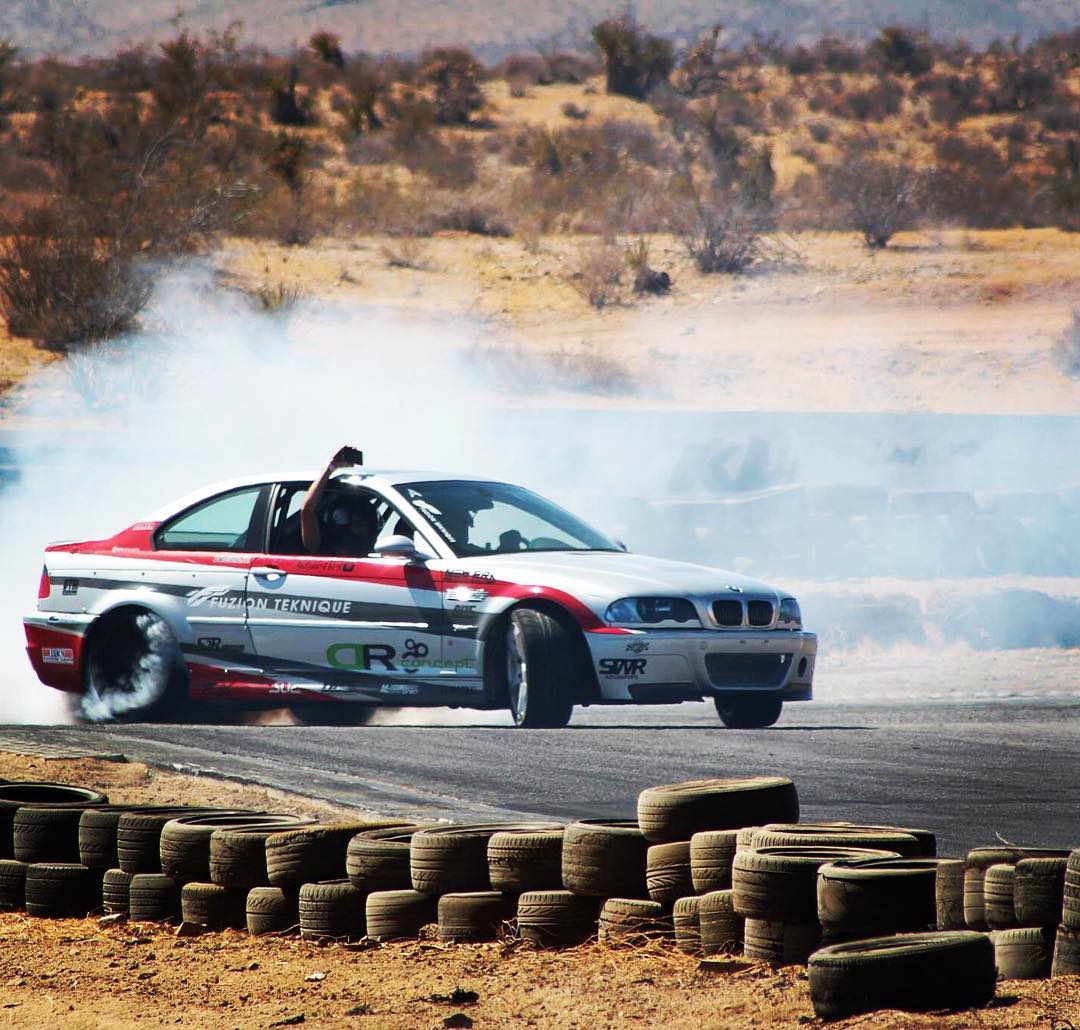 “For three years I didn’t drift. I had to start again. When I got back in the car, my fear factor had grown from before and I had a lot to overcome. Now, it’s just a blast.” 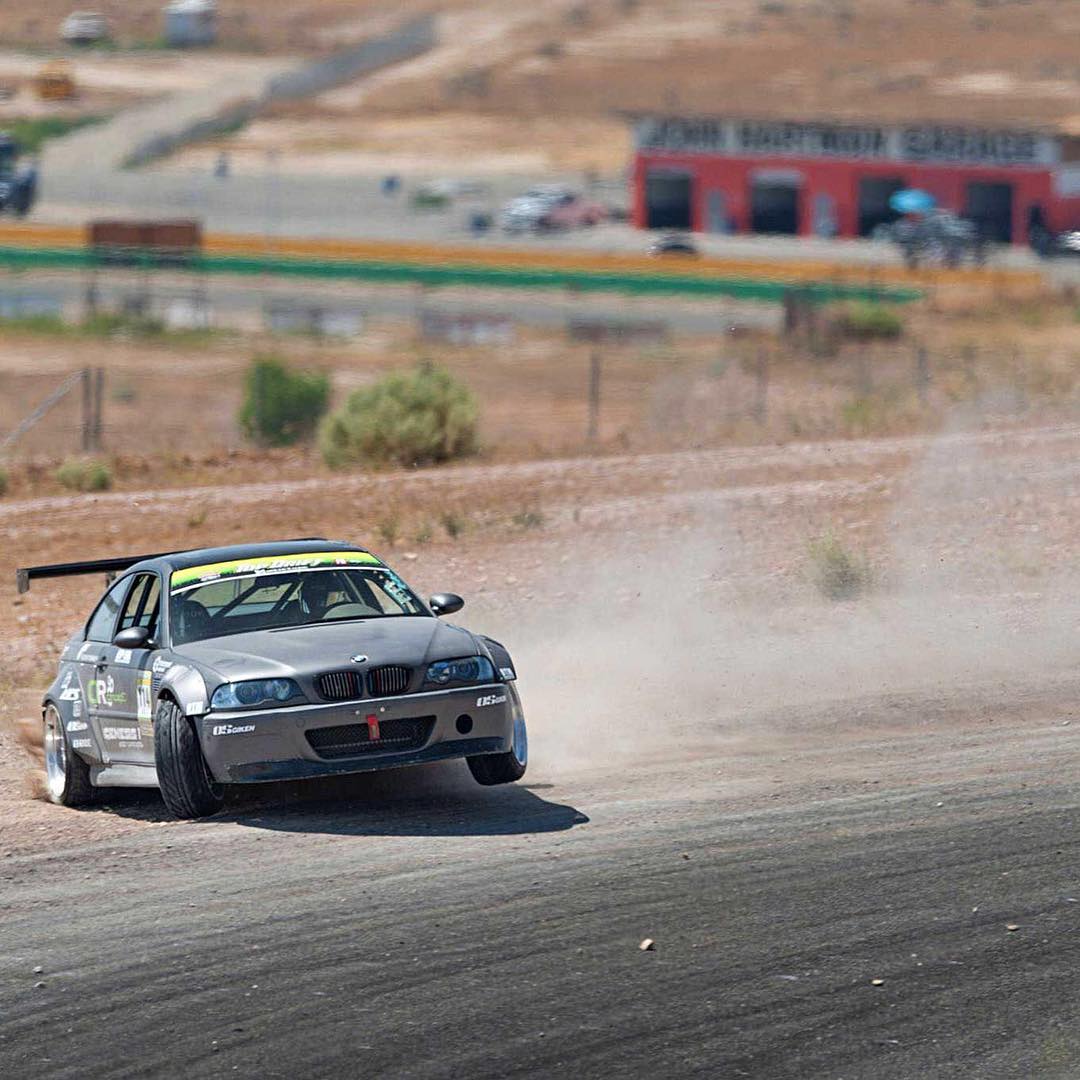 Since the completion, the car has received minor modifications, including solid aluminum Turner Motorsport Differential Mounts and Subframe Mounts, ventilation fans, and tweaks here and there for drivability. Most notably, however, is, of course, the new livery and wide-er-body now bulging from each corner.

Andrew proves perfectly that someone with the dedication to spend the time necessary learning new skills and who has the passion to want that end-goal can build something. While it took quite a lot of his own money up front, since the Bimmerfest debut and “The Smoking Tire” episode, he has picked up quite the notoriety from several companies who have offered their support to allow Andrew to continue doing what he loves every day. 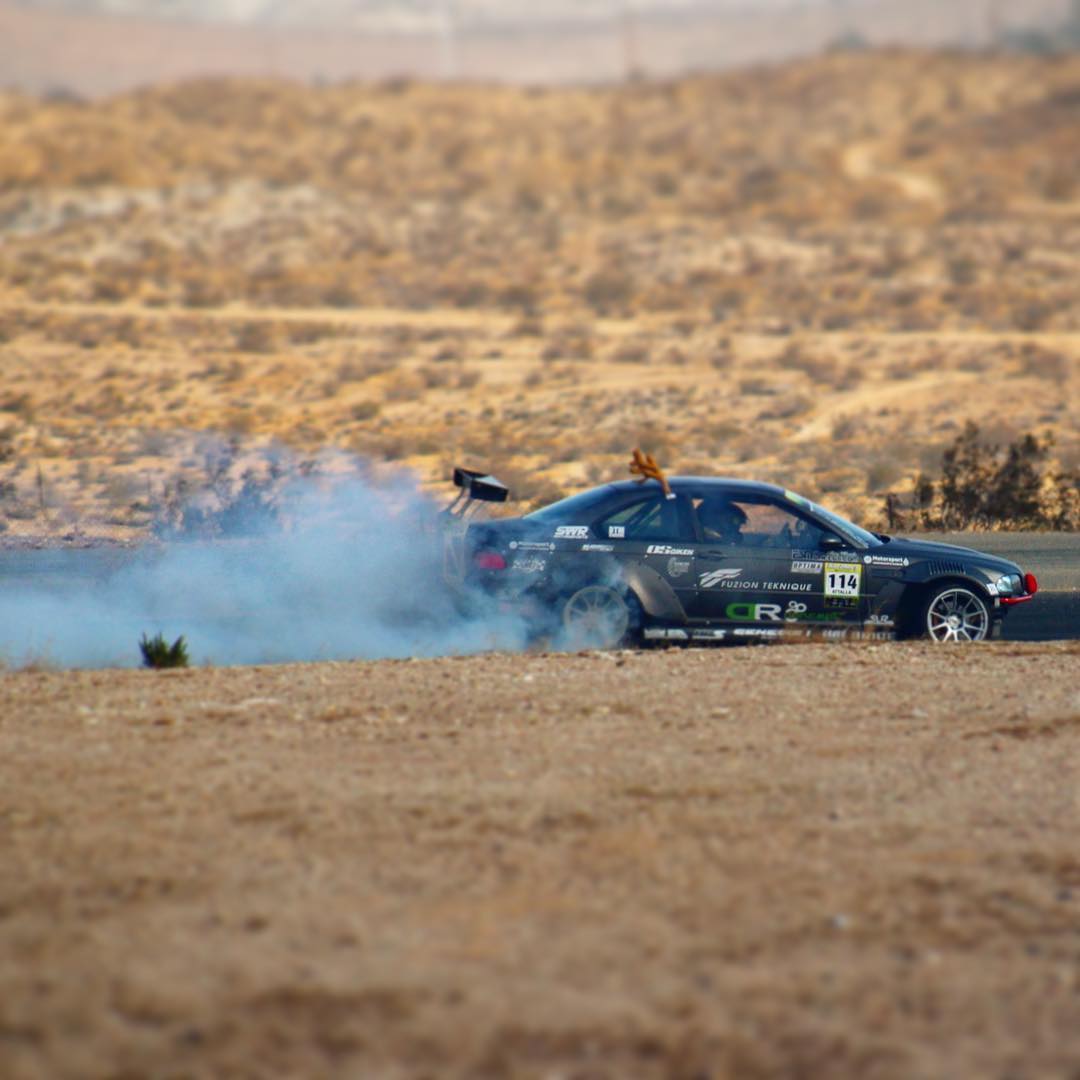 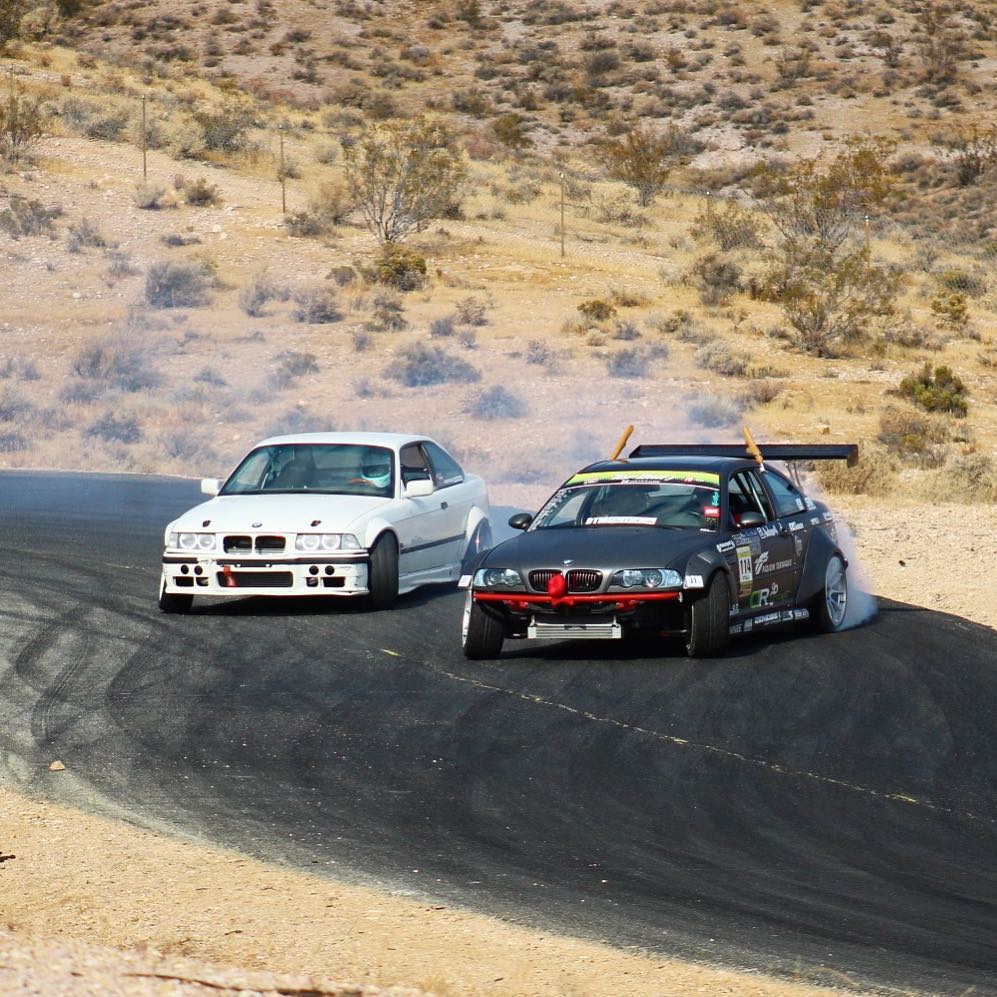 When it comes to wanting to do this yourself, Andrew offers some excellent wisdom as a professional. During his early stages in the sport, the few experts out there who could offer help with his build and become integrated into the world of BMW tuning were tight-lipped. Now, resources like Andrew exist so that people who share this passion can have a support network from where they can draw inspiration and learn from without the exclusivity that had previously existed as a hurdle. The key, according to Andrew, is a complete dedication and an unwillingness lose sight of the light at the end of the tunnel. Knowing that it will be finished, that it has to be finished, and that you are only out there to have fun is all you need to get started so long as you have passion and commitment. 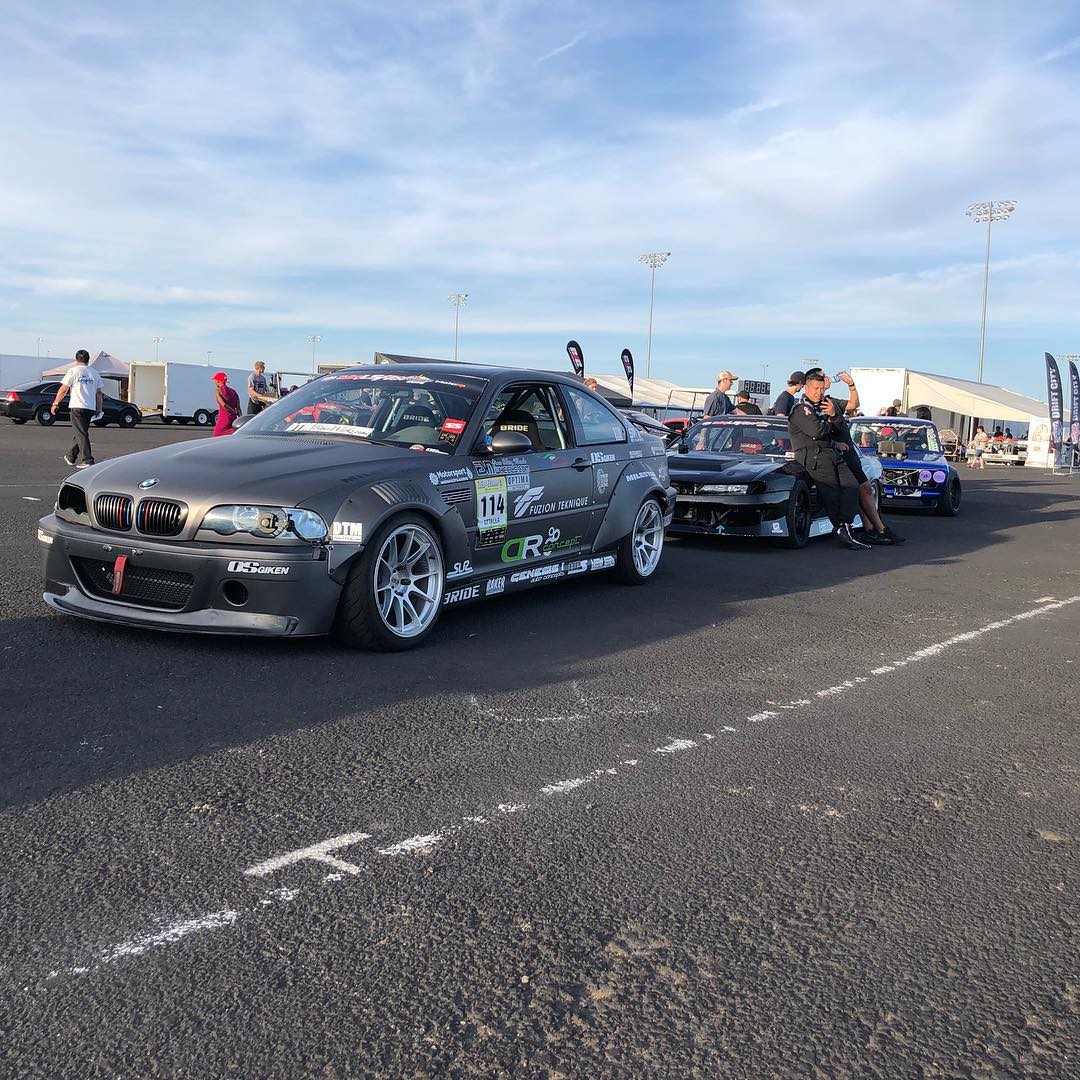 “We’re doing this because we love it and it’s fun. That’s the whole point and I think sometimes people lose sight of that.” 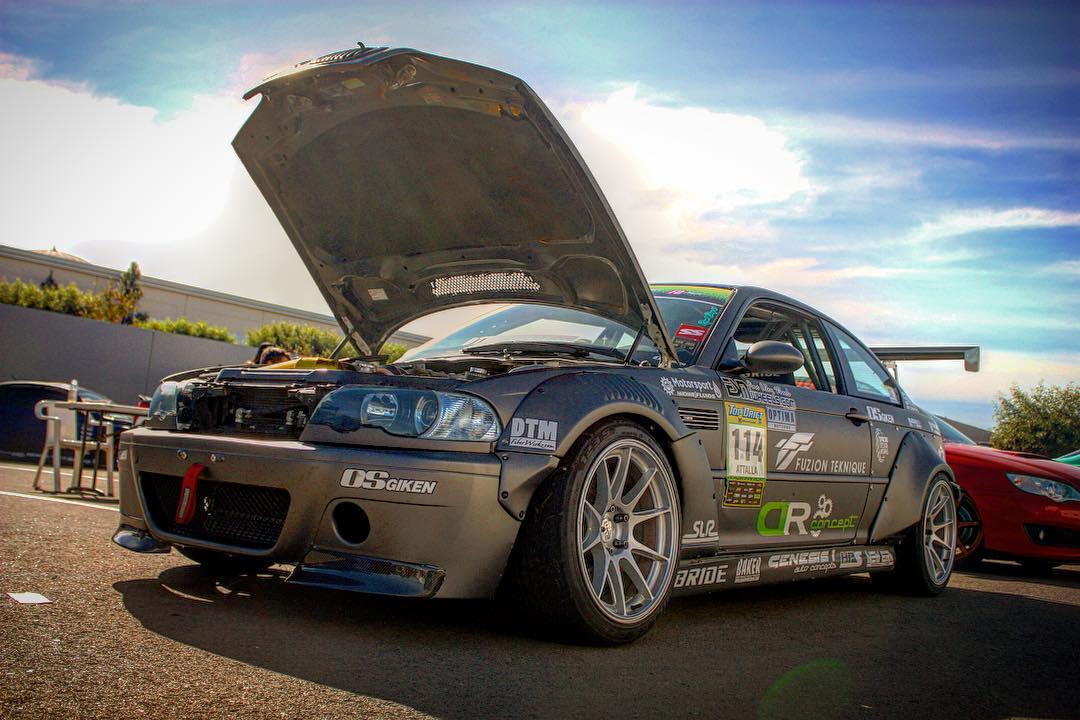 The biggest advice he shared with me is to keep that original idea in mind. That the minute drifting becomes anything other than just pure fun, it loses its point in the eyes of the drivers and that is where people become discouraged. Maintaining that relaxed feel and camaraderie among drivers and enthusiasts is why we do this sport that is so destructive to our cars and incredibly expensive to maintain. 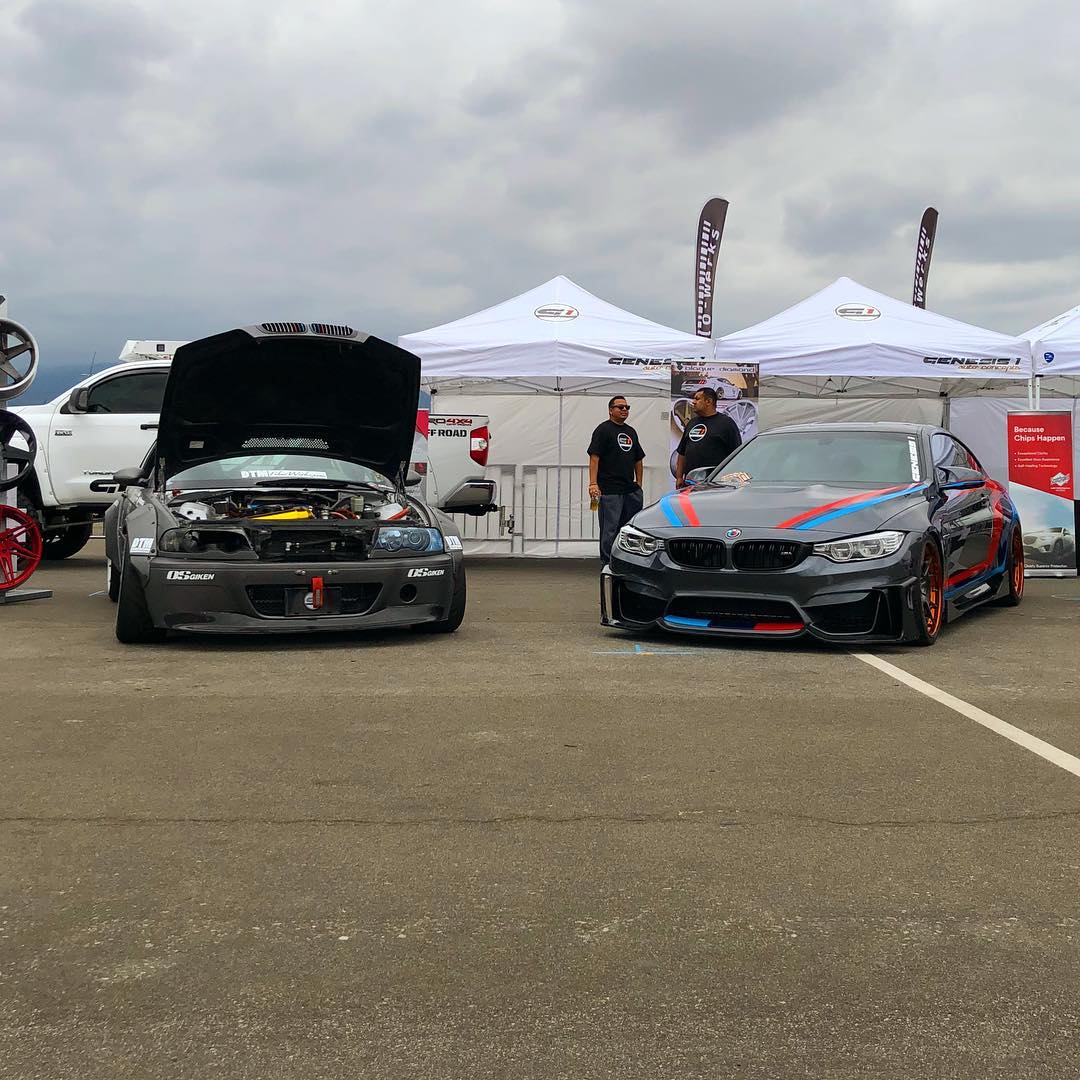 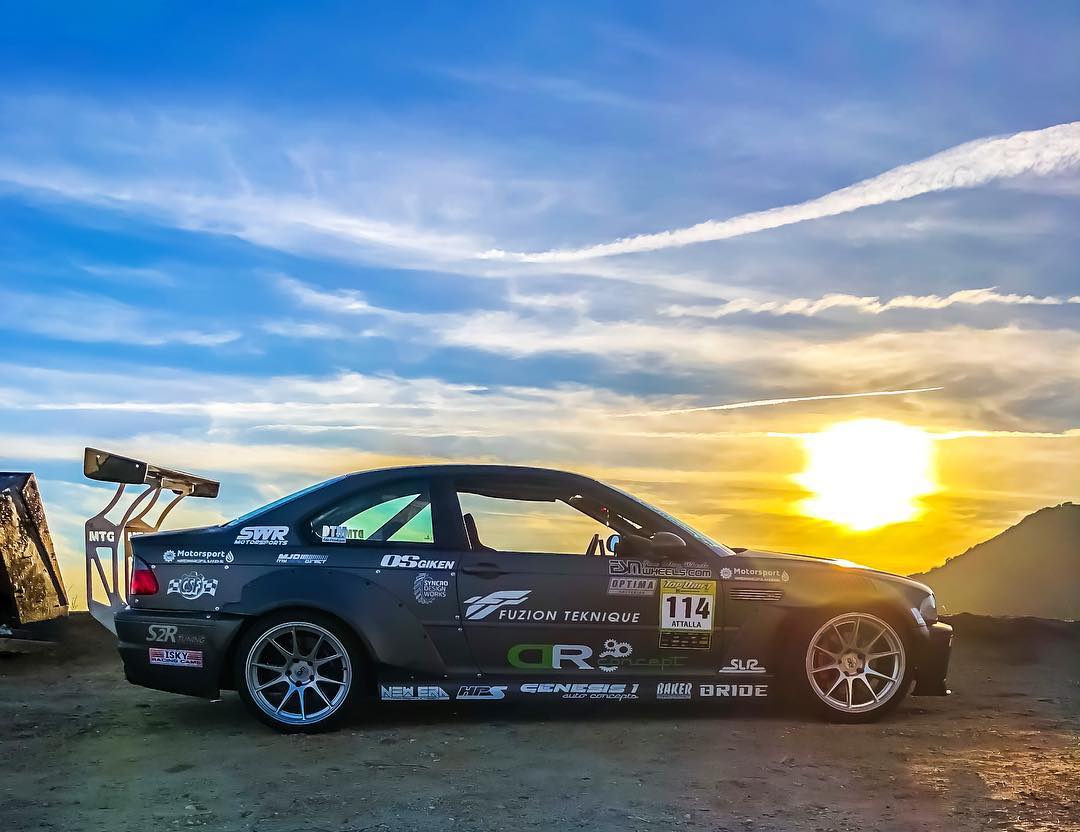 The ESM Wheels look right at home on this car with the functional drift stance. 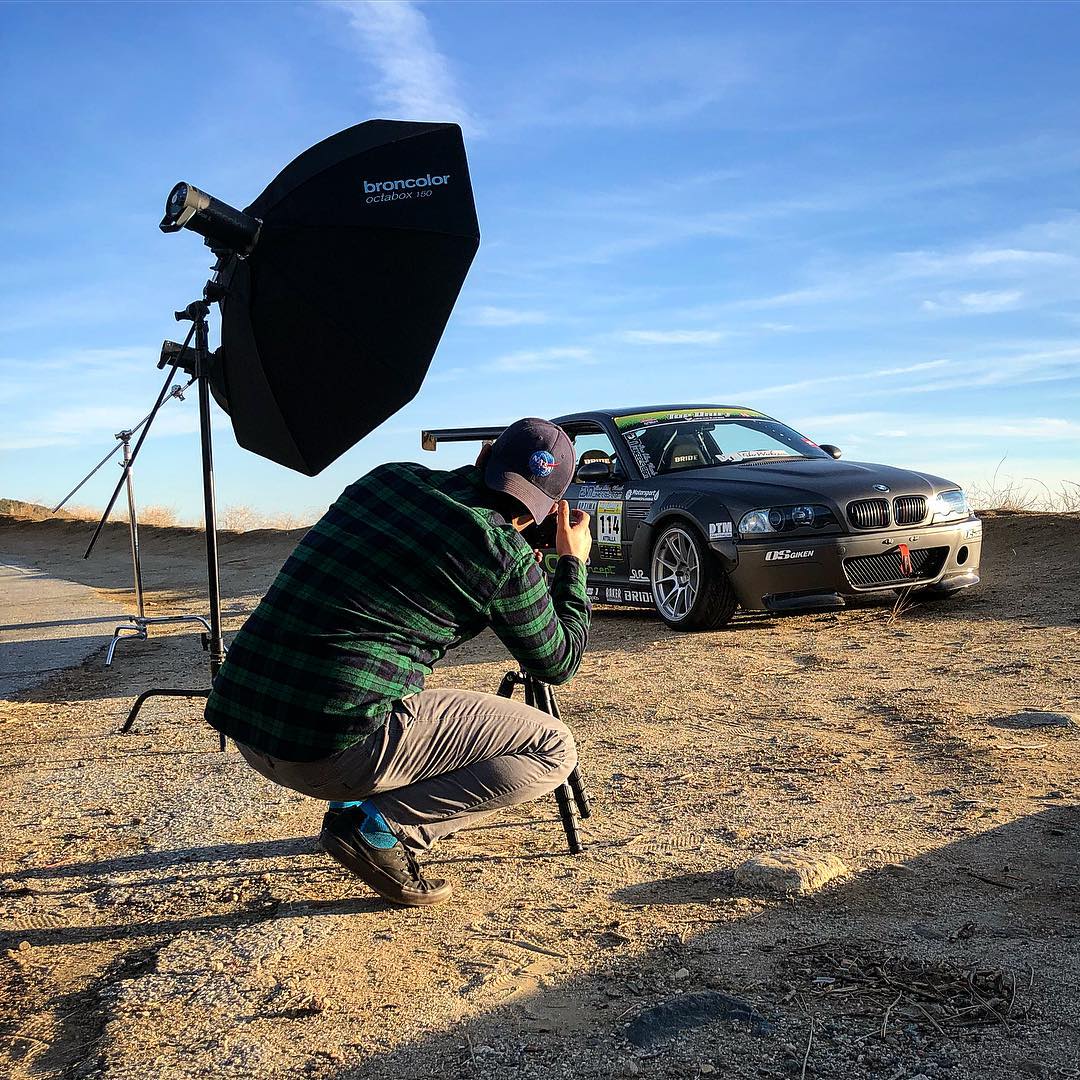 Andrew is an inspiration among enthusiasts and drivers with his incredible E46 M3. As a single person interested in joining the competitive world of drifting, Andrew has experienced severe challenges in keeping up with the high budget teams and opponents. The sport has become this insane horsepower competition and grown to be almost medically precise thanks to the gobs of money and support from companies eager for exposure in the demographic of drift racers and fans. Enthusiasts like Andrew who jump in head-first with no funding and a shoestring budget prove that anyone can still compete and have fun, even amidst the seemingly over-imposing opposition. We look forward to following his next phases of the build and will continue to check in with him as he becomes increasingly competitive over the next season, so be sure to follow along for more of his story and others.

What’s in the car:

Disclaimer: None of the images used in this article are the property of ECS Tuning. The images used are credited to Andrew A. or any other respective photographers and are not used in association with marketing or monetized purposes.