Few enthusiast groups are as varied as those of us who are infatuated with cars. Motivations and interests in automobiles are nearly uncountable, as the car world truly has an avenue for everything. Some of us are die-hard off-road junkies, others prefer showing off pristine vintage cars at the Concours d’Elegance, and the list continues with channel after channel of dedicated car folks who express themselves in their own way with their passion. The epicenter of the car world, from where all other forms of car-related hobbies are spurned, is inarguably racing. On Friday of last week, we had the pleasure of hosting Bill Griffin, a Spec E46 racing driver, who spent time with us here at ECS and introduced a few of our employees to the world of NASA racing. 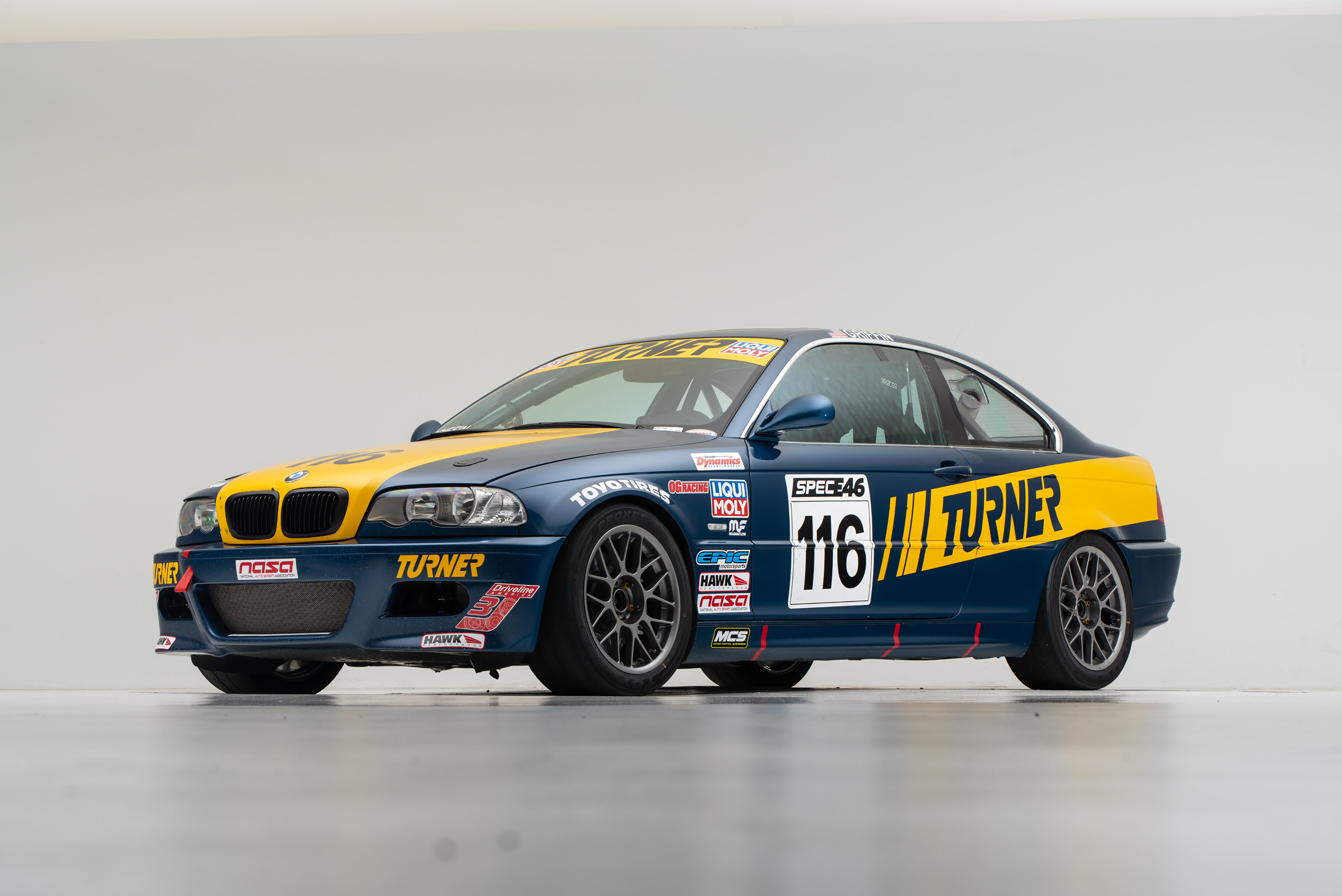 Bill was kind enough to hang out with us at our facility and chat with us about the car, his experiences in racing, and what it took to pursue his passion. Funnily enough, while many of us have been immersed in cars our entire lives, Bill had a fairly late start. He was always interested in cars but never had an opportunity to follow that nagging voice that tells people to just build a race car. With his kids grown, sports coaching, scouts duty, and other priorities changed, he was able to finally engage in his love of cars. It was through his neighbor and some friends on the internet that Bill landed on Spec E46. 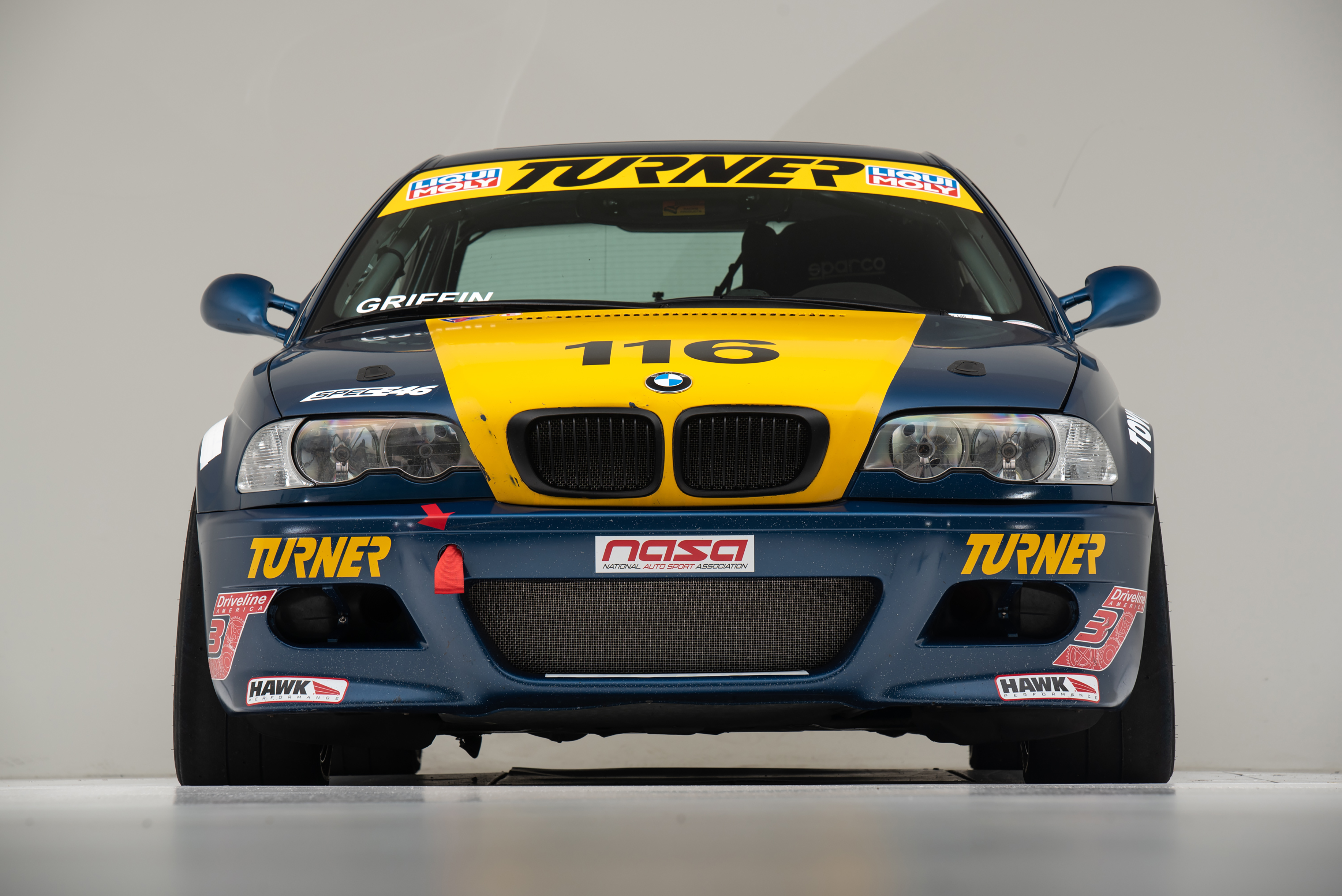 Spec E46, for those who don’t know, is a road racing class that focuses exclusively on the E46 chassis. Their goal is to emphasize vehicle consistency, relatively low cost, and high performance for an easy to enter and competitive on-track racing experience. Their class is a fairly new one aimed to introduce new drivers to the world of BMW motorsport. Classes also sanctioned by NASA are the Spec E30 and 944 Spec groups. A major difference between those classes and SE46 are the entry costs. The cars they use are aging and becoming more valuable, so the cost of entry is gradually increasing. With the creation of Spec E46 a few years ago, racers like Bill have a platform that offers arguably more excitement and performance. Additionally, donor cars in excellent condition are easy to find for a low cost. Bill advised us that those interested in racing their own can easily buy a car and work their way into racing through HPDE1, 2, 3, and 4 while turning their E46 into a Spec E46 in as little as four or five years for a relatively low upfront expense.

This is exactly what Bill did. What started with a factory 330ci purchased in the Spec E46 facebook group has become a full-on spec racecar that allows Bill to compete in both Spec E46 and ST5. This weekend at Mid-Ohio, Bill raced in the ST5 class, which was why he stopped by at ECS to grab some parts and tour of our facility. After the tour and obligatory photo-shoot, Bill offered a few of us the opportunity to join him at Mid-Ohio for the weekend with all-access press-passes for our photographer and journalist. Naturally, we could not refuse. 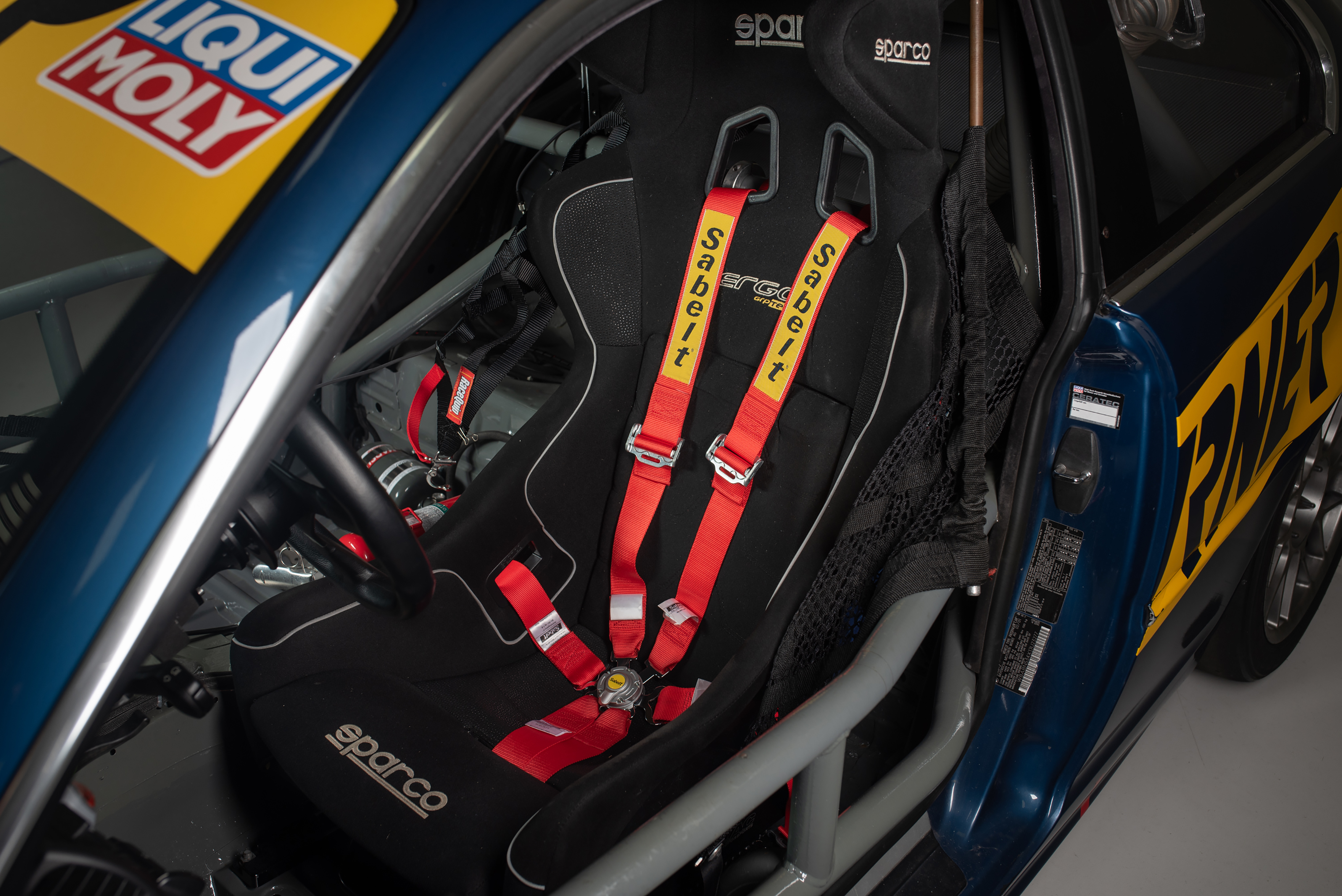 As a company of enthusiasts, we are all drawn together by different aspects of the same passion. Only recently have I become more fascinated with the world of racing in a controlled and sanctioned environment. The small interest I had before this weekend has since blossomed into a full-on obsession after the time Bill showed us. We arrived at Mid-Ohio on Saturday morning just before 10:00. Bill had press passes, ride along passes, and entry passes waiting for us at the gate, and we were directed to camp in the worker’s section. A VIP treatment, to say the least, immediately made us excited with anticipation for what else we would experience over the weekend. 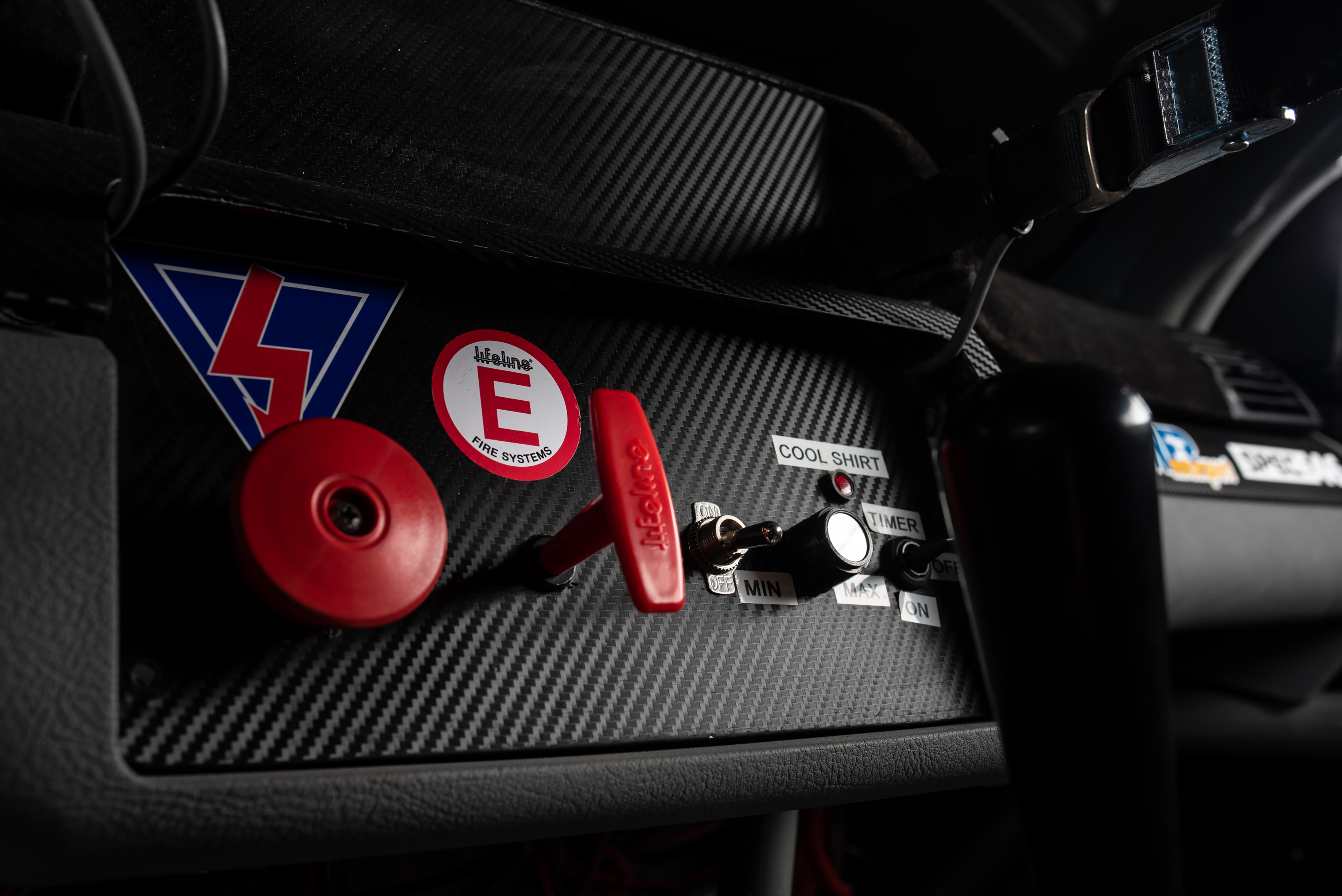 Bill met up with us during qualifying and gave us a complete rundown of the weekend. Saturday consisted of qualifying runs, HPDE races, time-trials, and a free dinner that evening. While we had him out of a car, we also spoke briefly about his racing history and build process over the last five years. The car experienced several iterations as it grew alongside Bill’s experience. He began racing in HPDE1 and just got as much seat-time as possible by attending ten to twelve events a year. This helped rocket his progression into SE46 as each year he advanced farther in his competitive licenses until finally, he became eligible to compete in the class for which he originally purchased his E46. This is valuable information if you have any interest in pursuing a career as a driver. Bill is living evidence that at any time you can get in a car and start, you just have to have that dedication to continuously improve and devote your time to maintaining yourself and your car. After the short interview, Bill jumped in a student’s E46 for another session as an instructor, and we were left to watch the cars thunder around the track. 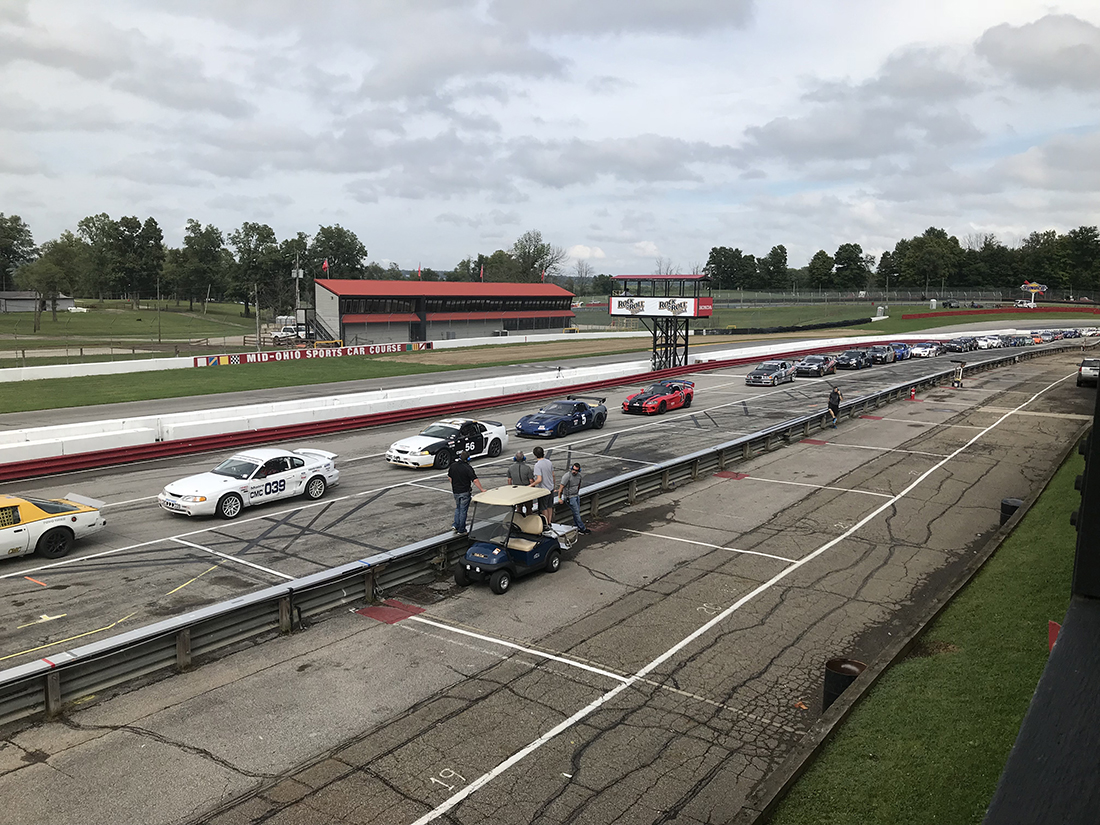 The E46 Bill drives is also something new to me. The E46 chassis has never particularly piqued my interest, nor has the 330ci that is required for SE46 racing. It wasn’t until Bill showed his car to me that I began to find distinct similarities to the BMW chassis I enjoy and the enthusiast ownership that can be experienced with one. His E46 is meticulously cared for but still sports some damage incurred in wheel to wheel racing and the occasional mechanic’s wire holding up small bits here and there. The whole thing is just gorgeous, even with its imperfections, solely for the fact that this car is truly used. Bill drives this E46 viciously and it shows.

The interior is stripped and adorned with a full 6-point spec cage, AKG shifter, Momo wheel, quick release harness, and myriad other required switches for independent operation of engine accessories. Even a Grand-Am spec exterior kill switch in the windscreen’s rain tray displays Bill’s taste for aesthetic accuracy and functionality. The detail to which he has constructed his E46 is clearly noticeable, especially when seen next to other spec cars. Since he built the car through necessity in stages, his attention was devoted to individual projects rather than building the whole thing at once. Arguably, this produced a better-looking and more appealing end result. Small characteristics about the car, like its carbon fiber trunk separator and hand-made trunk latch pull, make the E46 distinctly Bill’s. His car is proof you can have outlets of expression even in a tightly regulated racing class like SE46. 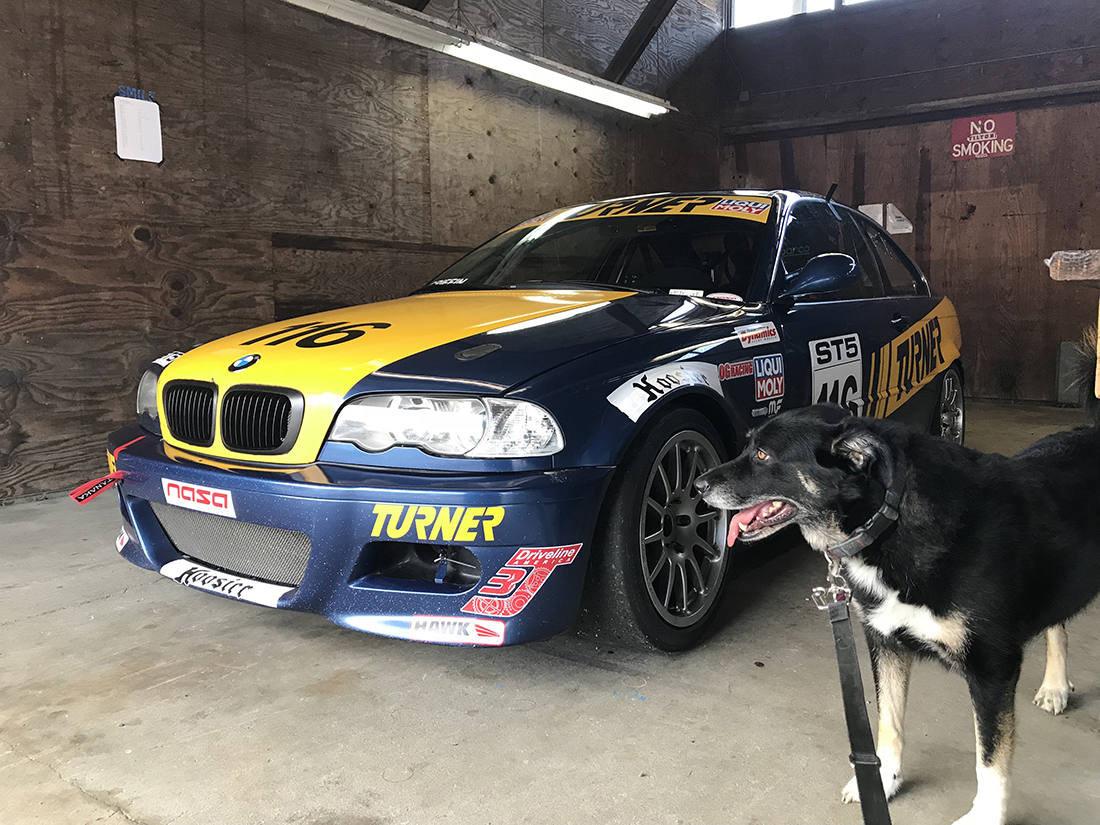 While we were constantly running back and forth all over the paddock, garages, grid, and campgrounds in an attempt to keep up with Bill in his sporadic bursts of ‘free’ time, we were fortunate enough to see some incredible racing. If you are not already engaged with NASA or SCCA racing, you should start planning to become involved. Everything about the weekend overturned my previously held impression of sanctioned track days as full of stuffy, rich, old men pretending to be Michael Schumacher a few times a year. The talent and dedication drivers like Bill demonstrated were more than enough to completely change my mind about track enthusiasts. We watched as a heavy rain moved in and Bill began to grin giddily with excitement. The thought of gaining practice driving in the rain made him so happy, which speaks volumes about his interest in becoming a better driver. 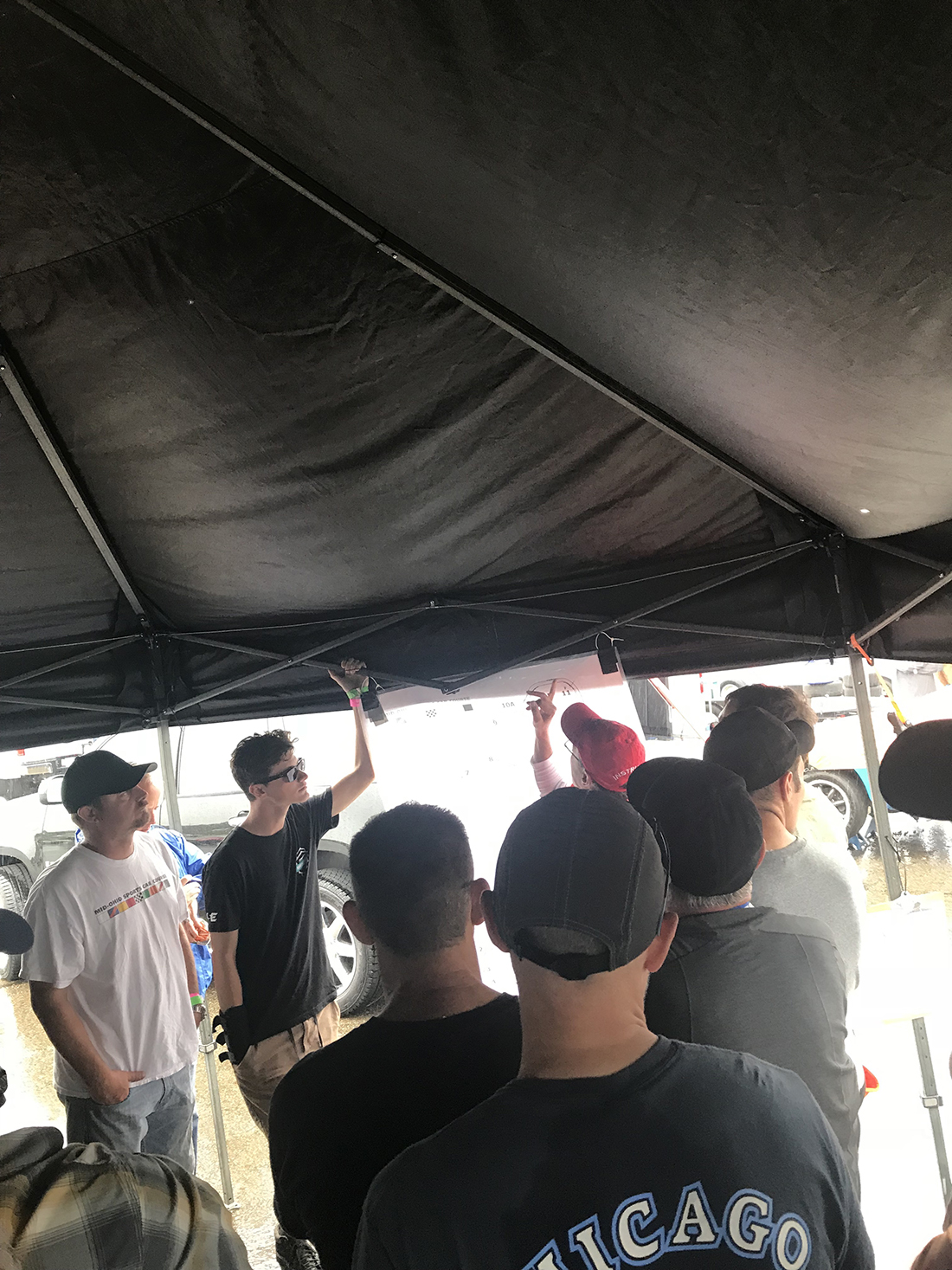 Driver’s meeting for the rain sessions

Unfortunately, he chose to remain on slick tires rather than using his rain set and suffered a slight meeting between his car and a tire wall early in the afternoon. Nothing was critically damaged and Bill came out with a smile. Every wreck, according to Bill, is an opportunity to improve. As the day continued, Bill proceeded to persist on the track to eventually qualify for his race on Sunday. The rain cleared and more dry track time was had, which seemed to take his mind off of his new bodywork.

That evening saw a quality shared by everyone in the car community. A BBQ prepared by the Fat Man crew brought everyone together for a full on party at the track. Free beer, delicious food, and endless racing conversation wound down the day perfectly. A full day filled with race gas, wheel to wheel action, and car spotting ended with several beverages in the garage around our favorite cars. Bill could not have been more hospitable, as he even allowed me to park my convertible in the adjacent garage and spend the night in the dry comfort of those bays rather than sticking it out overnight in the downpour the track experienced. Insert comment about sharing a common passion that brings strangers together as if they were family. 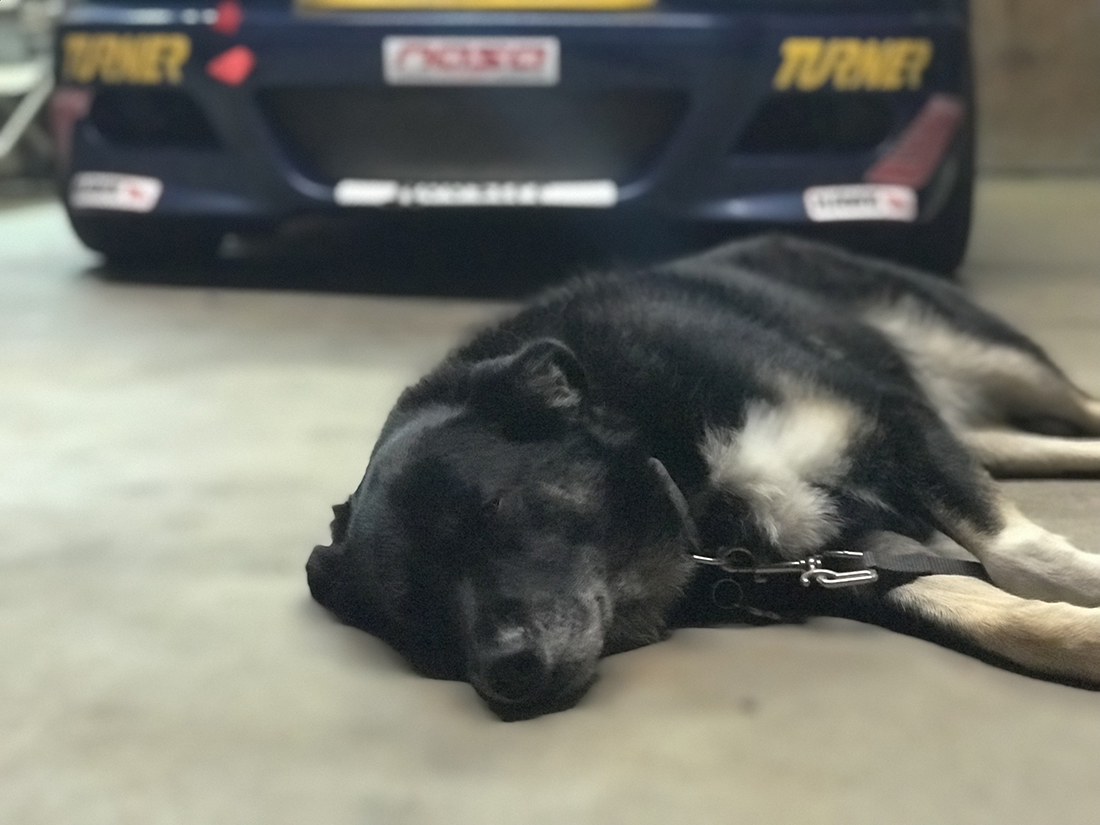 An early morning on Sunday began with the rumbling of racecars that were fired up all around my night’s lodging. Nothing could have been a more glorious alarm than LS7s, S54s, and EJs all barking to life. Sleeping at a racetrack has to be on everyone’s bucket list, even if you are just there to spectate. Which is a slippery slope to spending all your money on a race car, according to Bill.

Sunday was spent much like the previous day, but with an air of more intensity. The real competitions happened that day and final tweaking for the cars had to happen as quickly as possible to get the most track time. Bill adjusted his alignment, swapped to rain tires for the wet track conditions, and was scarcely off the track. While the photographer and I could only stay until mid-day, Bill kept racing throughout the day and eventually took pole for his ST5 class to finish out the weekend with an overall win. A twinge of regret upon hearing that he won made me wish I had stayed despite my exhaustion and other responsibilities at home. Overall, the weekend could not have been more enjoyable thanks to Bill’s invitation. 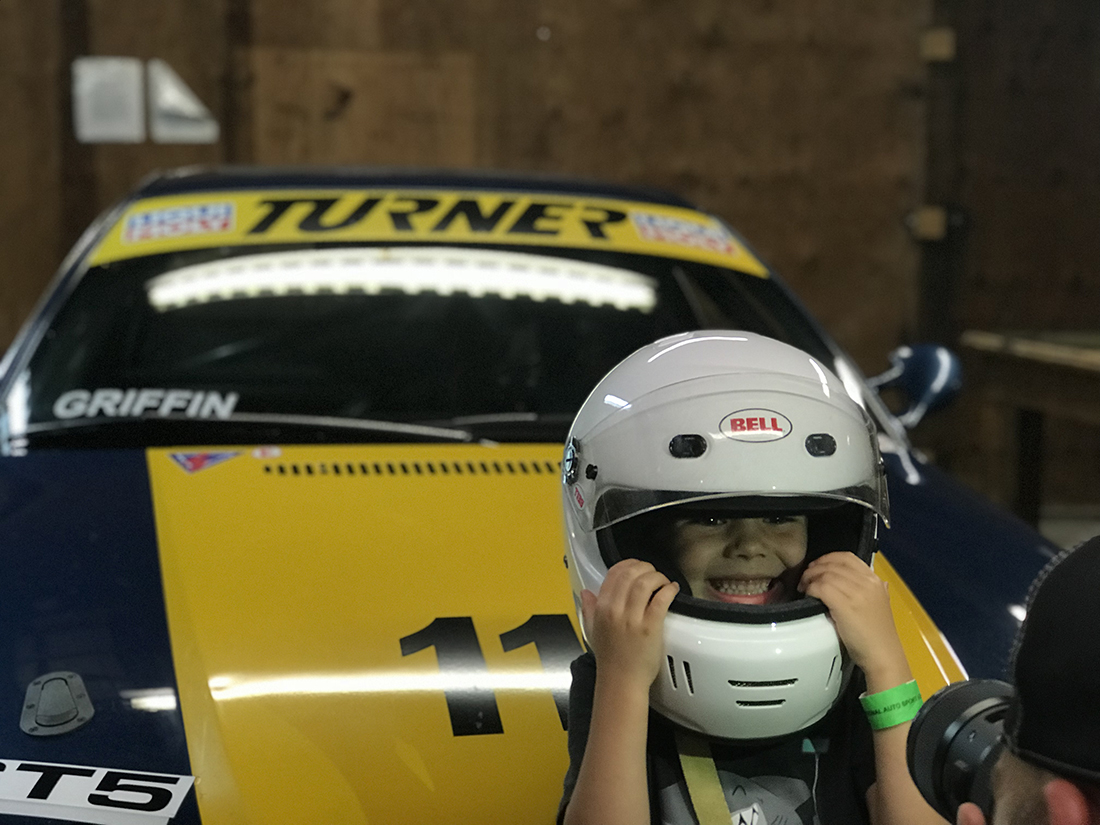 The dedication and automotive enthusiasm from drivers like Bill is tangible if one spends even a few seconds in their presence. Racing, while it may be a time-consuming venture, provides the perfect outlet for those of us who enjoy everything there is to love about cars. A combination of our love of the sport, love of tuning, and love of cars culminate in weekend-long experiences that are unforgettable thanks to sanctioning bodies like NASA who put these events together. While many of us have different attractions to the world of motorsports, the pinnacle of our interest is racing whether we know it right now or not. With any luck, competitive racing will inspire some of you to follow your passion to the limit like Bill and you will join in on the fun to be had pushing yourself around a track, growing as a driver, and building your perfect car. 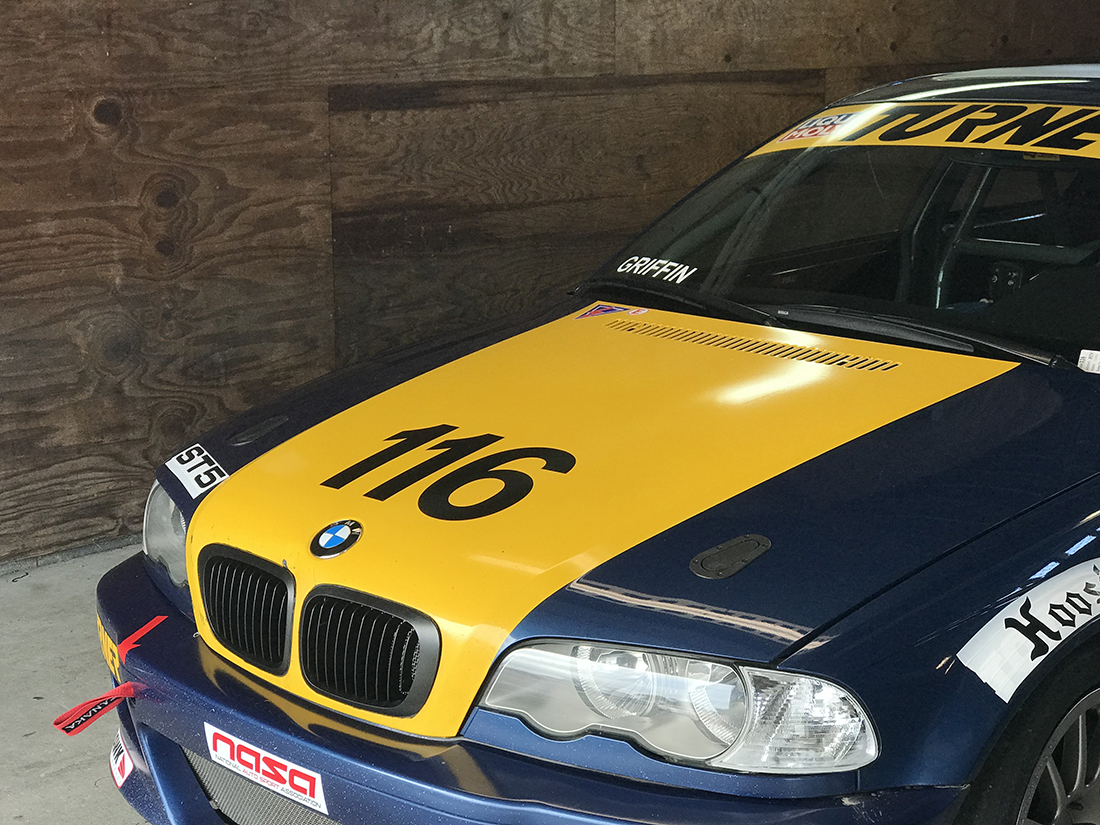 We would like to specifically say a special thanks to Bill Griffin, Turner Motorsport, and the folks at Mid-Ohio for their hospitality and such a wonderful weekend.