In 1980, Mercedes introduced the recently developed ‘Special Class’ prestige luxury sedan to American markets. The gas crisis and ‘gas-guzzler’ tax imposed upon cars on American roads led to the development of this car, and specifically its engine, as a response to those rules. Only a company like Mercedes would so adamantly redesign an entire platform based on a single legislature change rather than snub their nose at a bit of law. Zey must stay inside ze rules! The 1982 Mercedes-Benz 300SD Turbo Diesel was the luxury sedan that became an icon as the once class-topping elite passenger car for the rich, famous, and iron-fisted dictators everywhere. 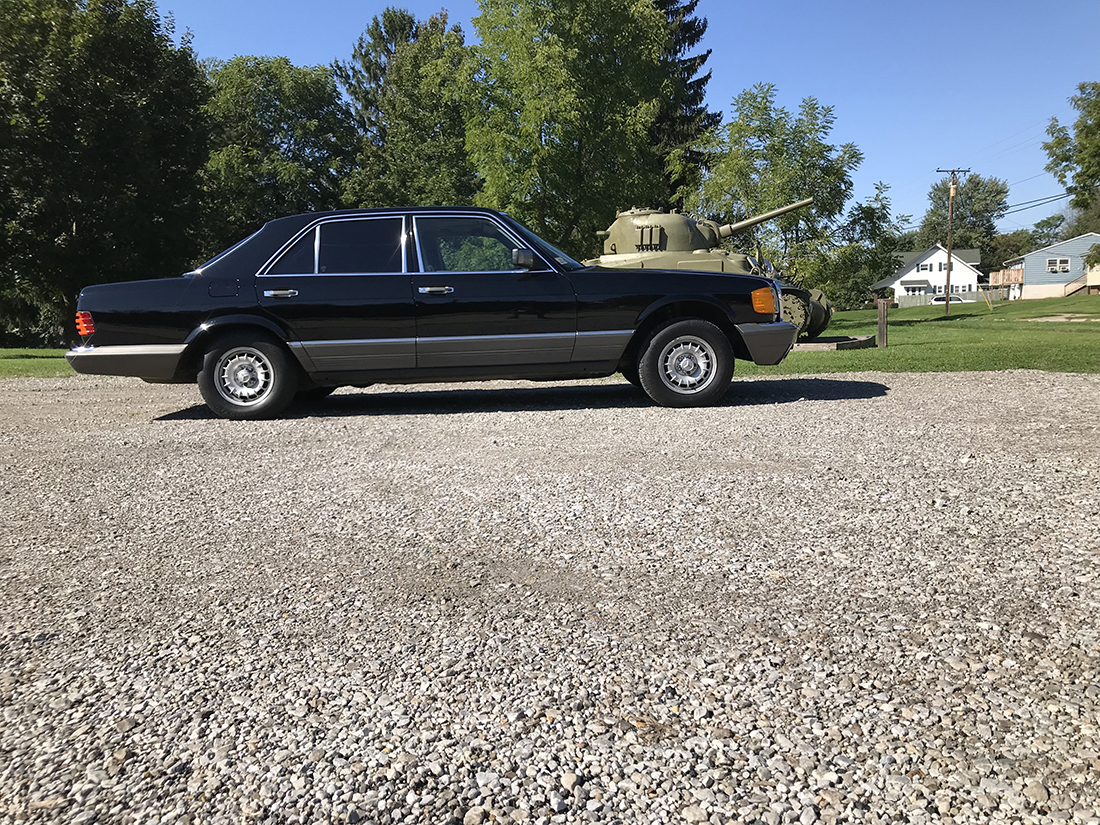 When the W126 began its run and directly followed its W116 predecessor, it did so with a new heart and style. The design changes included lighter body panels, better aerodynamics, and a 31mpg Turbo Diesel-powered I5 under the mile-and-a-half-long hood. This engine, though excruciatingly slow by today’s standards, raised eyebrows around the world with its speed and acceleration when compared to similar diesel engines. This is the result of the turbocharger affixed to the engine which produces a noticeable power increase when the go pedal is completely mashed. This pristine example of the aging dictator special which I had the fortune to borrow is no different. With a bit of coaxing, the inline-5 cylinder clatters its diesel soundtrack and propels the planet-sized Merc surprisingly quickly for what it is. The luxury sedan still feels like it can be overtaken by a hover-round, but it is exponentially faster than Rocky’s 300D I recently had the displeasure of experiencing. 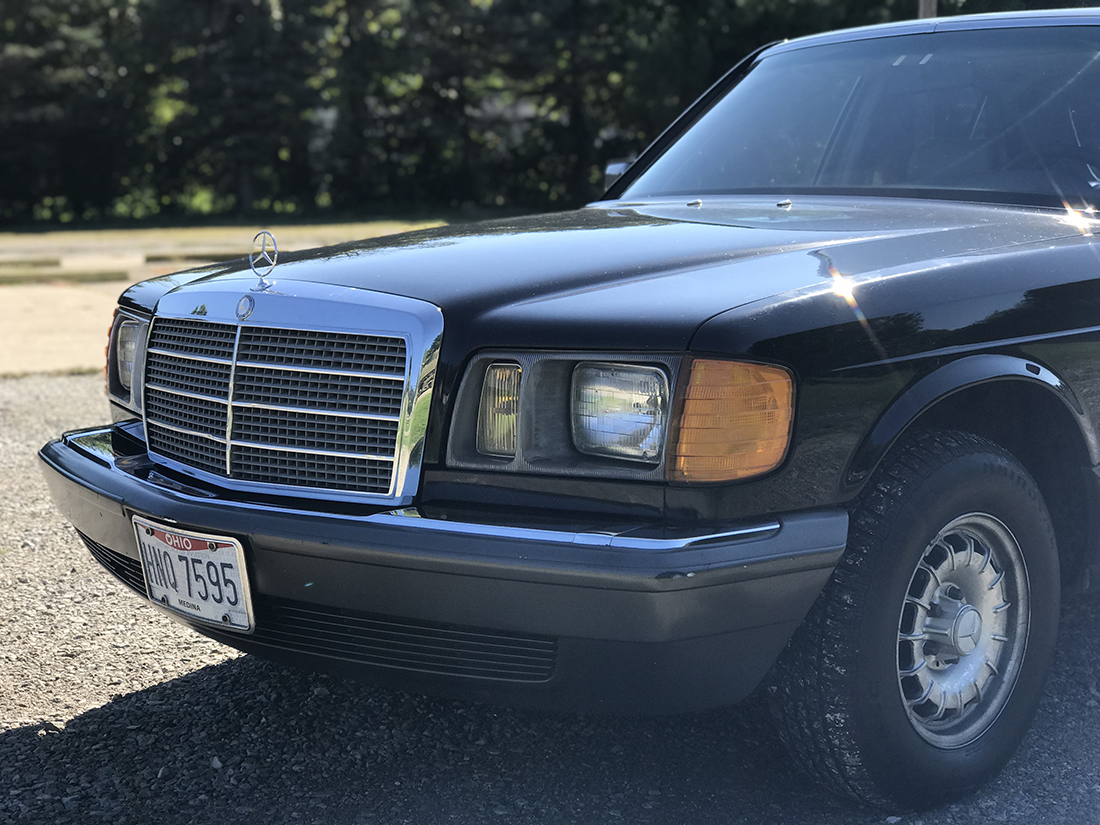 Obviously, his Merc does nothing to encourage the driver to crave sporty responsiveness or blistering launches. Just looking at the car from the outside suggests the occupants might be more concerned with their tea remaining in their China cups and not splattered all over the finance section of their newspaper. The driver and passenger seats further reminded me that this car was one of supreme comfort, not competitive performance. It is competitive in a different way. One I would come to experience as I floated down the country roads of rural Ohio, isolated by the sprung, leather-wrapped, and decadent driver’s seat. 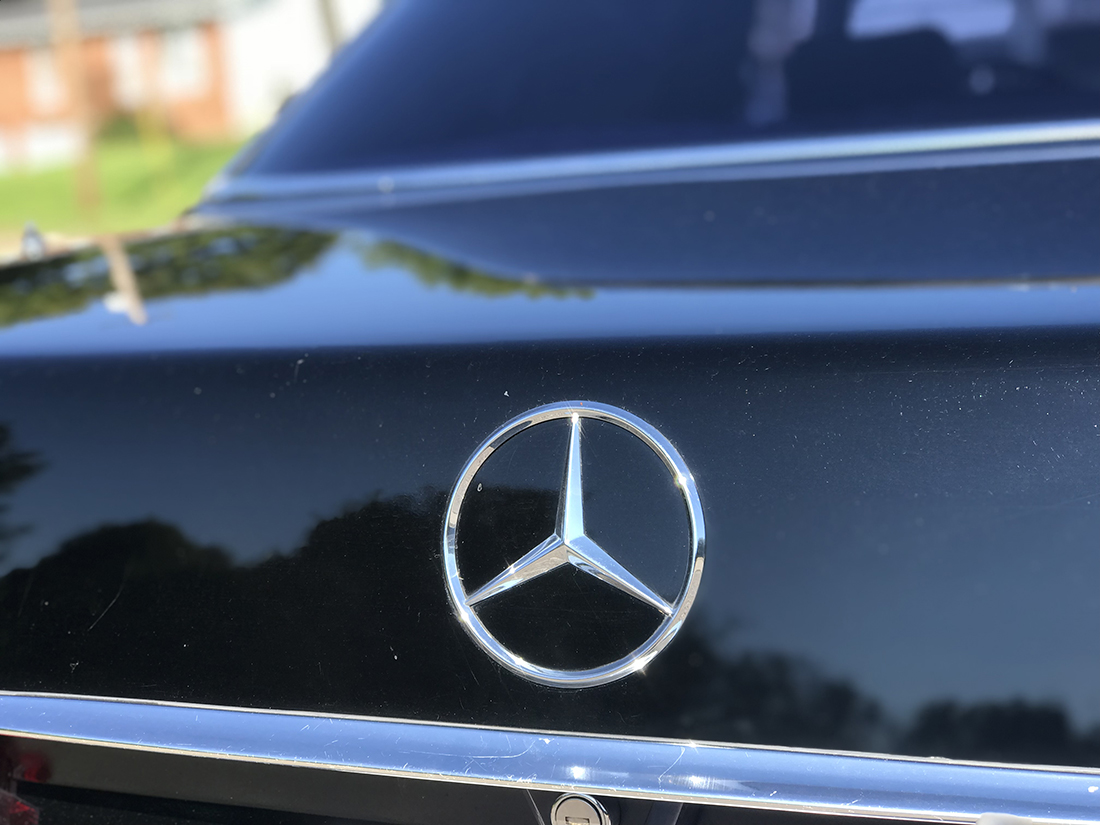 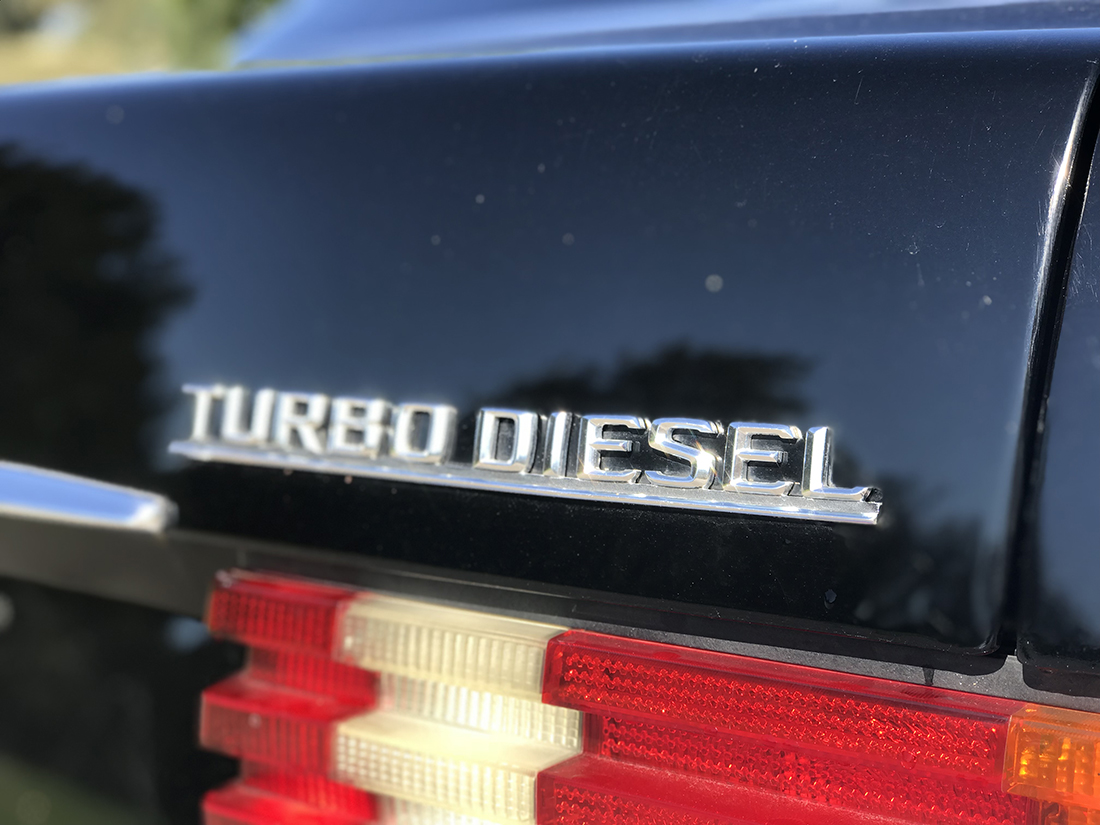 The big diesel-powered sedan might not win any podium finishes on a track, but its understated exterior and overly-luxurious interior suggest any competitiveness was already concluded and all recognitions were won before anyone turned on their engines. The car screams success silently, not with explosive tones of a tuned engine and sporty exhaust. It says ‘I don’t care if you’re faster because the private jet to which I am being chauffeured will have me a continent away before you’ve had your supper.’ It is certainly a case of ‘Tortoise and the Hare’ with regards to the nearly 2-ton four-door. 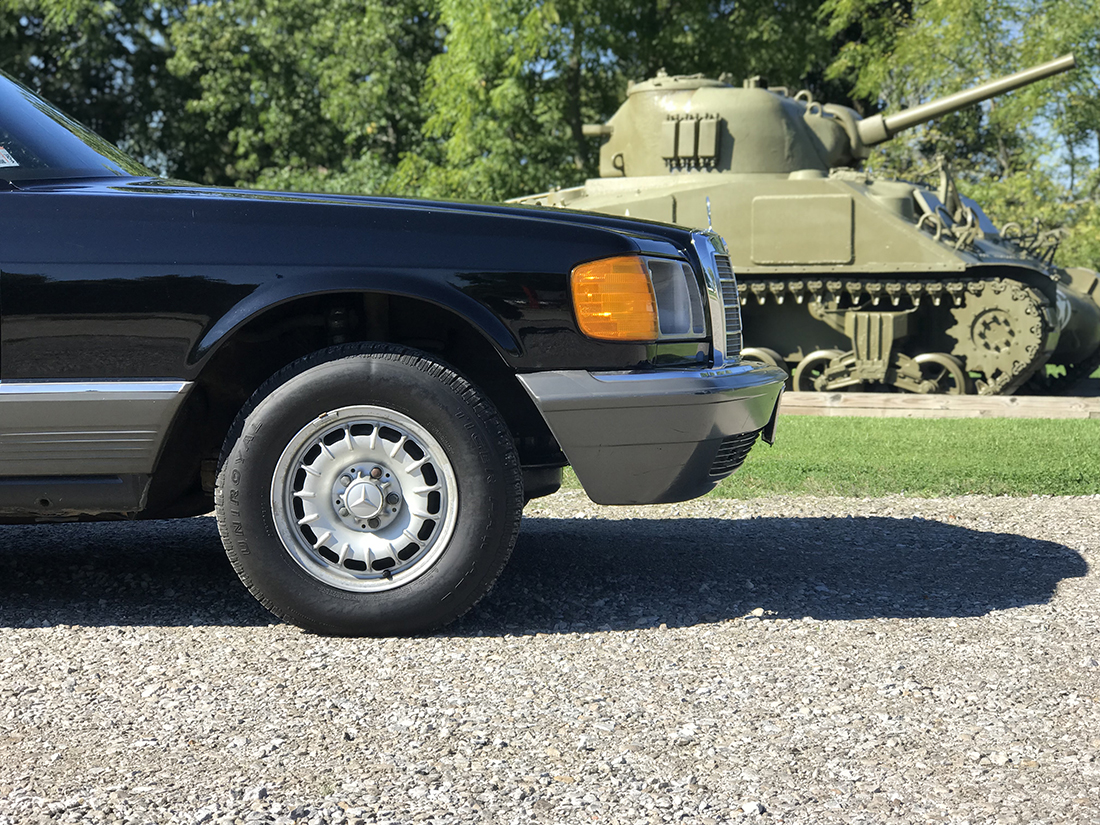 As I quite literally cruised down what I know to be horrendously bumpy roads, I was encased in supreme comfort and completely removed from any roughness in my path. The car acted as though it had an accompanying butler whose sole job was to dust and smooth the road in front of the Merc so as not to disturb any dignitaries who may be reclining in the spacious back seats. The quiet solitude also awarded me time to imagine who those passengers and drivers might have been. 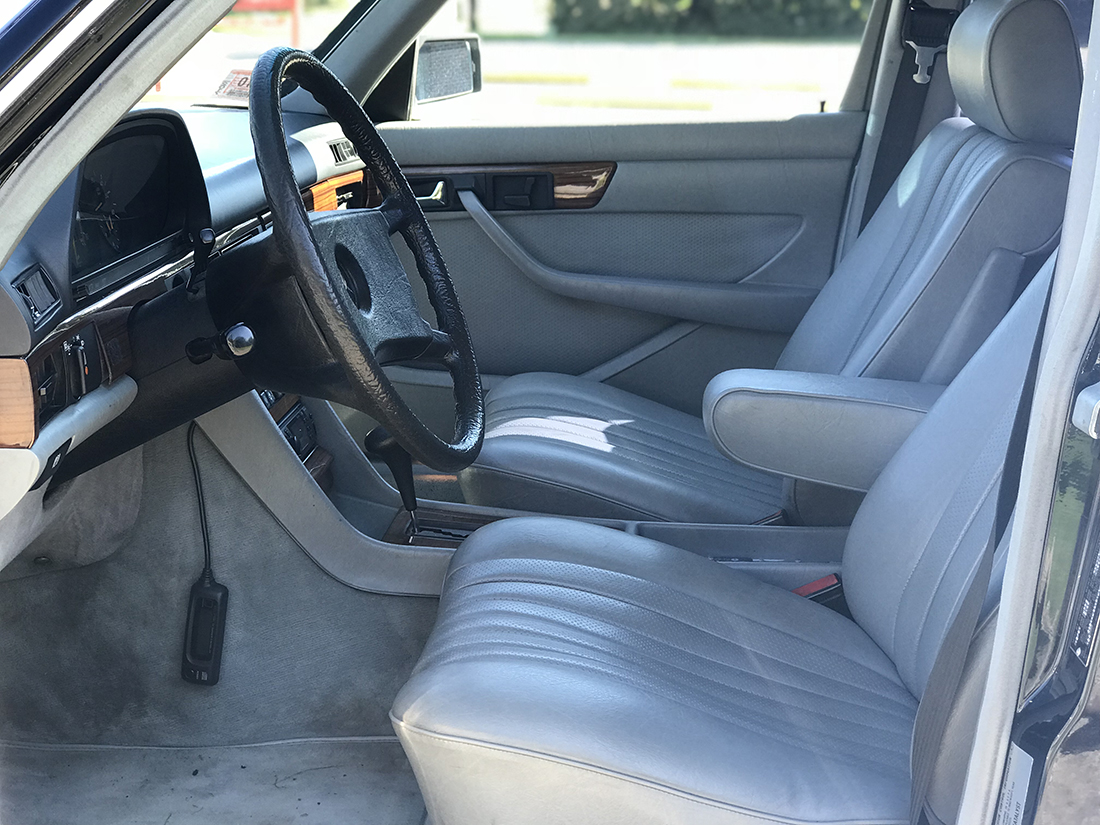 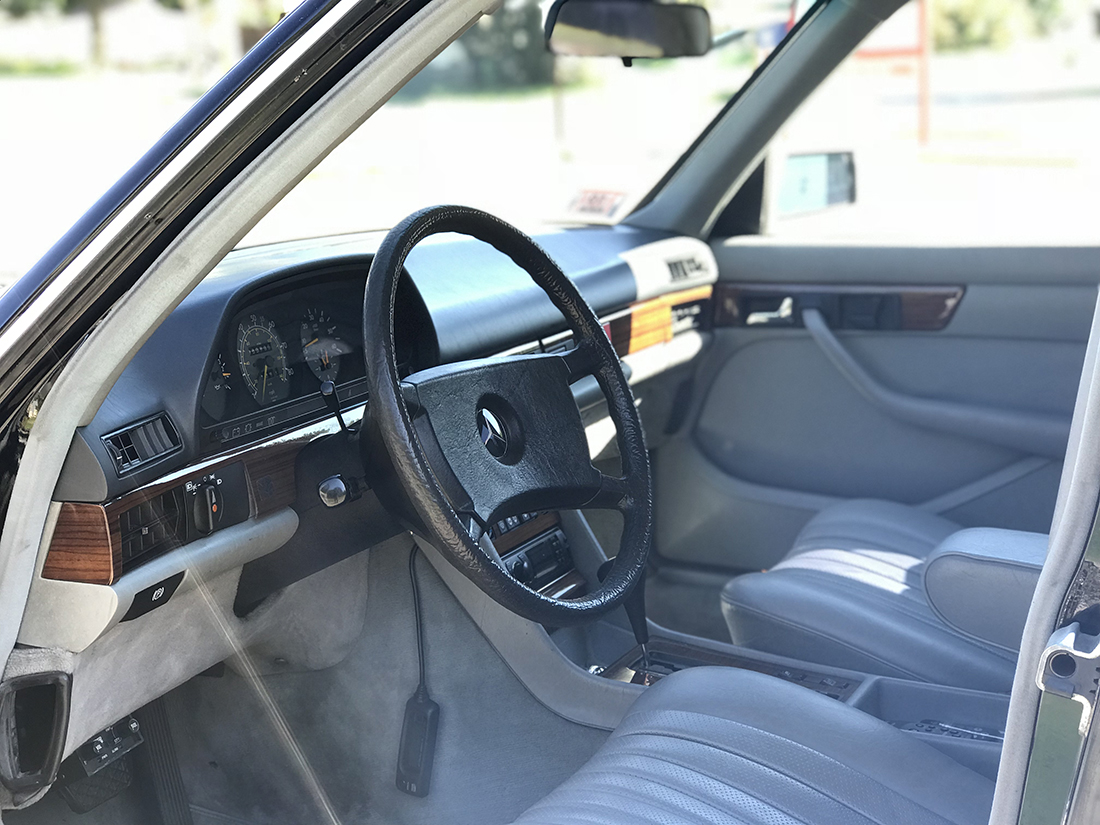 While this model was distinctly an American market car, the Special Class Mercedes-Benz saw action across the globe. That action should not be taken lightly, either, as nearly every diplomat, dictator, or otherwise less-than-benevolent despot could have been found in a version of the big German sedan avoiding a hailstorm of bullets and protestors in developing countries worldwide. The car evokes a feeling of superiority and inflated sense of self-worth that completely fits in line with the narcissism associated with its list of infamous owners. I have to admit that I too felt that ego-bump behind the wheel and could only wonder what it would have done to my swelled head had I found someone willing to drive me around while I sat in the backseat planning my Wall Street takeover. 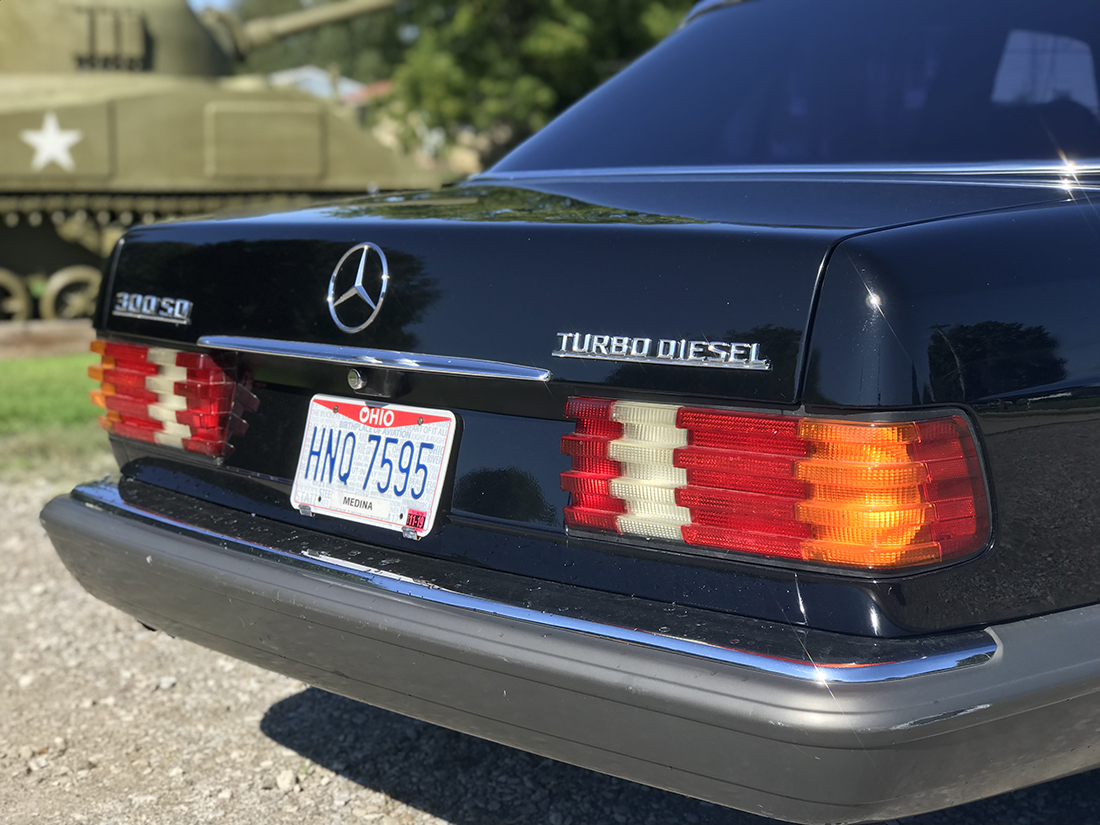 The thought of a car with such a posh interior trudging down dirt paths in steamy South American jungles or through the desert to a fortified stronghold is surprisingly not farfetched. While I am too young to remember when these cars saw the bulk of their fascist usage, the wonders of television have ingrained in me the association between this car and a good old-fashioned evil dictator forever. Shows like Narcos are full of presidential figures and obscenely wealthy traffickers sharing terse conversations in the back of these cars. Enough of them were the vessel for an explosive hit on one’s enemies to make me hesitant to turn the key the first time, but after the initial shock of not exploding in a destructive fireball was gone, I did entirely find the appeal of a car like this Mercedes Turbo Diesel. The problems of the outside world are completely sealed away when you close the doors and confine yourself to the isolation that is this car’s cabin. Since almost no outside noise penetrates the cockpit, I had to imagine the crackle of AK-47 gunfire all around as I enjoyed the silence inside the Merc. 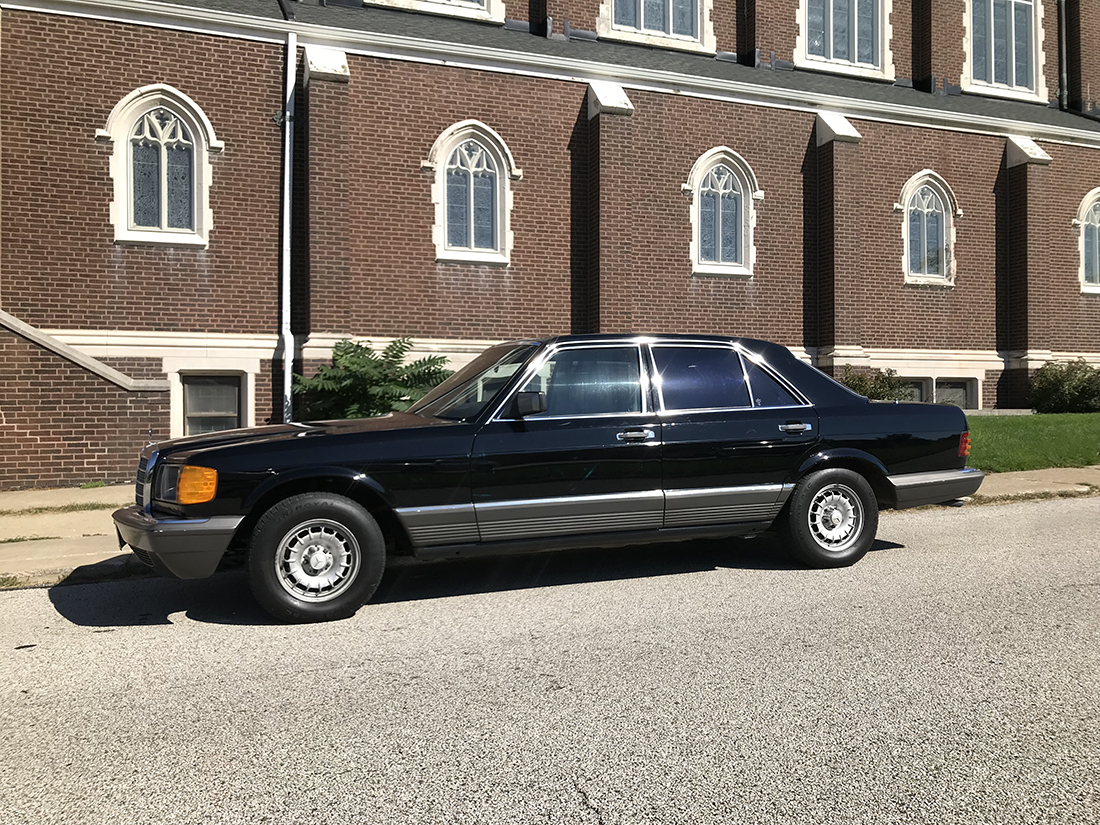 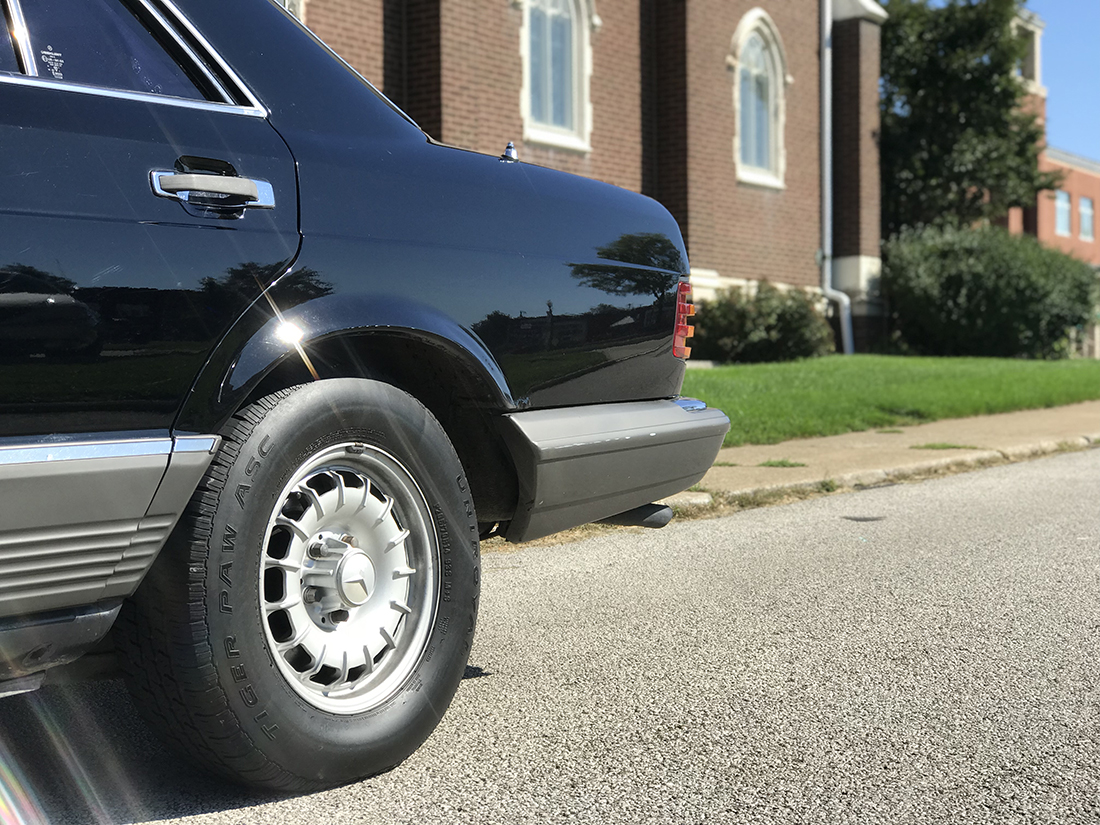 All the stately cruising in the big sedan made me realize the sanctum of inner peace to where I retreat in my stripped out race cars is incomplete. With the contrast of a raw, unbridled, and completely nerve-fraying race-car, I felt more able to appreciate something so sedate and plush. Never before have I found myself so at home in something that boasts barely 130 horsepower and the scale tipping weight of a foreign embassy building. The drive was enough to entice me to consider that the businessmen and lavishly decorated warlords of the 1980’s may have been onto something in their choice of mobile offices. The 300SD provides creature comforts that meet today’s standards well and feel completely relevant in the world of modern technology, while it offers the nostalgia of 80’s culture that so enthralls many like me. 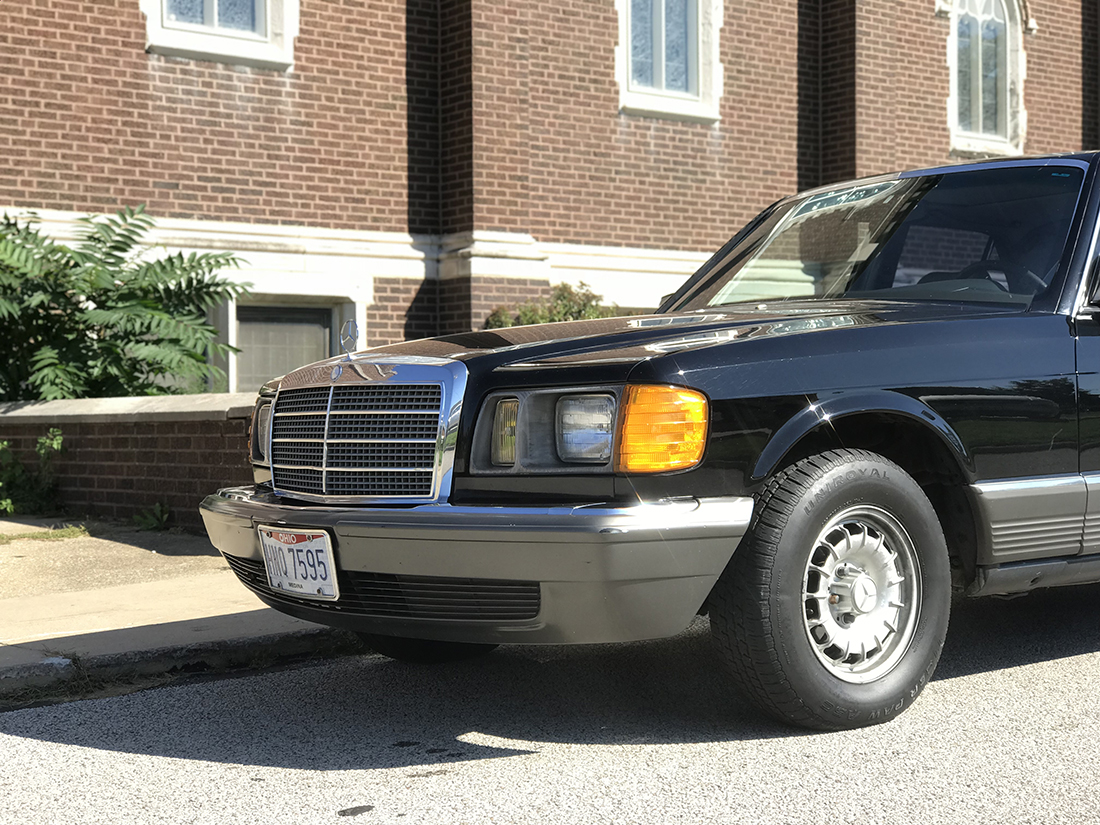 The wood trim around the center console and HVAC controls remind occupants that this car is, at the end of the day, a luxurious Merc aimed at the most elite consumers. To have the opportunity to drive, or even own, one of these cars that were a status symbol is intoxicating. Now, it can be appreciated by even the lowly likes of automotive journalists on a daily basis. The analog switches, climate control wheel, and extremely mechanical nature of the car make it readily apparent as to why they were so popularized by owners in countries not known for their amount of paved roads. No matter where the car is, be it rural Ohio or a bullet-riddled bazaar in the Middle East, this stately sedan is perfectly capable of transporting its passengers to their own quiet cocoon of luxury. The experience was nothing short of exemplary, and one I would encourage everyone to enjoy as soon as they can find one. 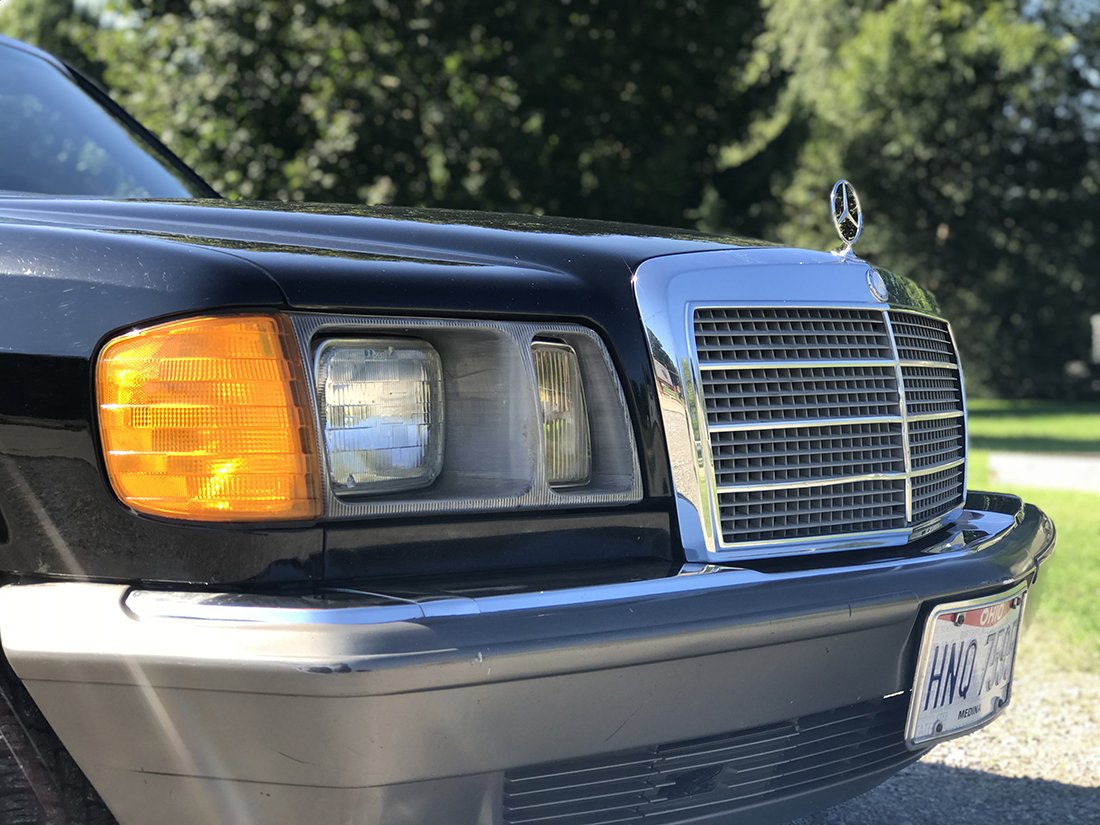 The 1982 Mercedes-Benz 300SD Turbo Diesel is precisely the perfect car for which it was made and still exhibits those attributes over thirty years later to a new generation of drivers like myself. New cars do not share the same rugged, mechanical, analog aspects that make this diesel so appealing. Its overall construction, the feel of each toggle switch, and the cushiony ride are all a part of years past that we seem to have forgotten in a culture of multitasking. This car was built to do one thing specifically well, and it does so with a feeling that it was the ultimate in its segment. The 300SD may not offer the same level of all-inclusive multi-functionality, but it does provide the singularly best experience in terms of luxury transportation. With the 300SD under my belt, I will find it difficult to encounter a more comfortable and enjoyable mode of transportation. With any luck, a benevolent dictator will award me a ride in something that could hope to rival the absolutely exquisite experience that is the 1982 300SD Turbo Diesel.

If you or your contingent of valets who care for your big-body executive sedan need to repair anything after a bout with local resistance, our catalog of Mercedes parts has everything you need to keep it driving.