IMPORTANT! All GFB pistons are checked for fitment and tolerance before shipment. Please do not drop the GFB piston onto a hard surface as this may cause (invisible) damage that could result in boost leaks or sticking.

Locate factory diverter valve solenoid. It will either be mounted directly on the turbo compressor cover, or it can be mounted remotely at the front of the engine bay on cars like the Mk6 Golf R.

Unclip the wiring connector from the top of the solenoid coil – note there is a small locking tab that needs to be pulled in the same direction (as indicated by the white arrow opposite) as you pull the connector to release it. 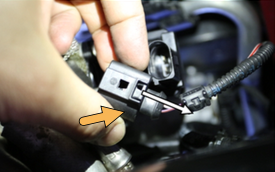 Unscrew the 3 mounting screws and remove the factory diverter valve from the car.

Pull on the plastic “basket” (revision D) or the diaphragm shroud (revision G), the whole assembly will pop off leaving the bare solenoid coil. Keep the yellow o-ring.

For revision C valves, first, pull the piston from the body and remove the spring. Then remove the piston shroud – this can usually be pulled out by hand but if it’s too tight, it can be carefully levered out with a flat screwdriver.

Please note: the amount of force required to “snap” the DV+ body onto the solenoid varies because the solenoid is moulded plastic – some solenoids are quite loose and need to be held together until it is bolted onto the car, others can be quite tight and need a good deal of force (by hand). This variation in factory moulding tolerance does not affect the operation in any way.

Fit the valve/solenoid assembly to the car in the factory location using the supplied longer bolts, and re- connect the wiring loom.

Whilst the DV+ might look pretty basic, there is a very significant difference in the way it operates compared to

the factory diverter valves, and other aftermarket products on the market.

The factory diverter uses the solenoid to directly actuate the valve. The problem with this method is the actuating forces are very weak – the return spring is weak, and the solenoid coil is weak when the valve is fully closed because of the long 5mm stroke (magnetic force diminishes significantly as distance increases). So increasing the spring pre-load of the factory valve doesn’t help, since the solenoid coil will have trouble opening the valve.

The GFB DV+ uses the factory solenoid coil, but its role is to control the pressure signal used to actually open and close the piston, which is known as “pilot actuation”. This means the forces that the solenoid coil deals with are much lower, and its operation is therefore reliable at much higher pressure. The solenoid operates a plunger that controls pressure to the back of the piston. When the solenoid is off, there is equal pressure on both sides of the piston, but importantly, the area the pressure acts on is about 25% LARGER on the back of the piston than the front. So there is 25% more force holding the piston shut than there is pushing it open. The bottom line is, it doesn’t matter how much boost you run, the DV+ will never crack open.

When the solenoid activates, the pressure on the back of the piston is relieved, and it can then open. The benefits of this system are reliable valve actuation at high boost, no leakage, and being all metal parts, no failures due to increased temperature.

Because the DV+ has a higher closing force than opening force, it doesn’t actually NEED a return spring behind the piston to work – it will open and shut, and hold boost, just as reliably with or without the spring. 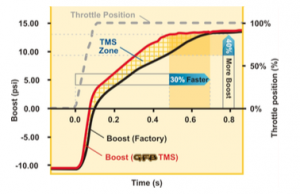 This is the basis behind GFB’s TMS principle, which is this; turbo lag is minimized when the valve only vents just enough air to prevent compressor surge – the graph opposite illustrates the reduction in lag. To read more about the TMS principle, visit the website: http://www.gfb.com.au

This product is intended for racing use only, and it is the owner’s responsibility to be aware of the legalities of fitting this product in his or her state/territory regarding noise, emissions and vehicle modifications.

GFB products are engineered for best performance, however incorrect use or modification of factory systems may cause damage to or reduce the longevity of the engine/drive-train components.

GFB recommends that only qualified motor engineers fit this product. Warranty is for the period of one year from the date of purchase and is limited only to the repair or replacement of GFB products provided they are used as intended and in accordance with all appropriate warnings/limitations. No other warranty is expressed or implied.

What to expect from your DV+:

The DV+ is designed to offer three key improvements over the OE diverter:

Boost holding: There are a number of revisions of factory diverter valves, each with their shortcomings. The diaphragm types typically seal well, until they begin to fail – which is almost assured on a tuned engine. The piston- type revision D and later model C valves are not as fragile, but their ability to seal ranges dramatically from average to terrible, even when brand new.

The DV+ will seal properly even up to 50psi, ensuring all of your hard-earned boost gets to the engine. Of course, the performance benefits you notice from the driver’s seat will depend entirely on the condition of the factory diverter you replace. For example, if your factory valve is not (yet) leaking significantly, there will be no change to your peak boost.

However, if your factory diverter is leaking only a small amount, a DV+ may show the same peak boost, but with an improvement in the amount of boost held to redline. If your factory valve is leaking significantly, fitting the DV+ will result in higher peak boost pressure, as well as less drop-off at high RPM.

Throttle response: When using the DV+ with the main spring installed, it will preserve as much boost pressure as possible when the throttle is lifted. This means that when you lift off to shift, or when using slight on-off-on throttle modulation, the DV+ can help recover boost faster.

What the DV+ can’t do however, is create more boost, or cause the turbo to spool faster. Quite simply, whatever boost the turbo makes, the DV+ will deliver to the engine, and it will also preserve as much boost pressure as possible during a brief throttle lift-off, which is where the faster boost recovery comes from. If there is no boost to preserve, or if boost still drops off at high RPM, that is simply highlighting the limitations of the turbo.

The DV+ can be configured in two different ways, depending on your desired outcome. Fitting the DV+ with the main spring installed as shown on the previous page can be thought of as a “Sport” mode, offering the best possible throttle response and boost recovery during on/off throttle applications (i.e. during gearshift with a manual transmission).

Using the main spring means the DV+ can open and close progressively in response to how much boost pressure is present, unlike the factory diverter which just opens fully regardless of whether there is boost to vent or not. Because this operation method is different from the factory diverter, it is not unusual to hear a different sound from the intake when lifting off the throttle at low RPM, especially if you have an aftermarket intake or a larger turbo installed.

Additionally, in some cases this different operating method may be misinterpreted by the ECU as a faulty diverter valve (is simply sees the diverter doing something different, it doesn’t know the diverter is actually attempting to improve throttle response), resulting in fault code P2261 being recorded. This does not indicate that the DV+ is faulty, nor does it cause any issues to the turbo or engine.

If the idea of a possible fault code of different sound bothers you, and you simply want a direct replacement for the factory diverter that is stronger, holds boost better and lasts longer, you can choose to install the DV+ WITHOUT the main spring behind the piston. This configuration can be thought of as an improved “Standard” mode, which behaves just like the factory diverter, but with the added benefits of better boost-holding, strength, and reliability.