Cars and pets often resemble their owners. Whether it be an intangible attitude or uncanny physical resemblance, somehow you can’t help but think the universe brought those two together whether they are aware of the similarity or not. Such is the case with Tim and his BMW. The two share an exuberant and positive outlook that builds incredibly fast, not unlike the turbo spool from under the carbon fiber hood. 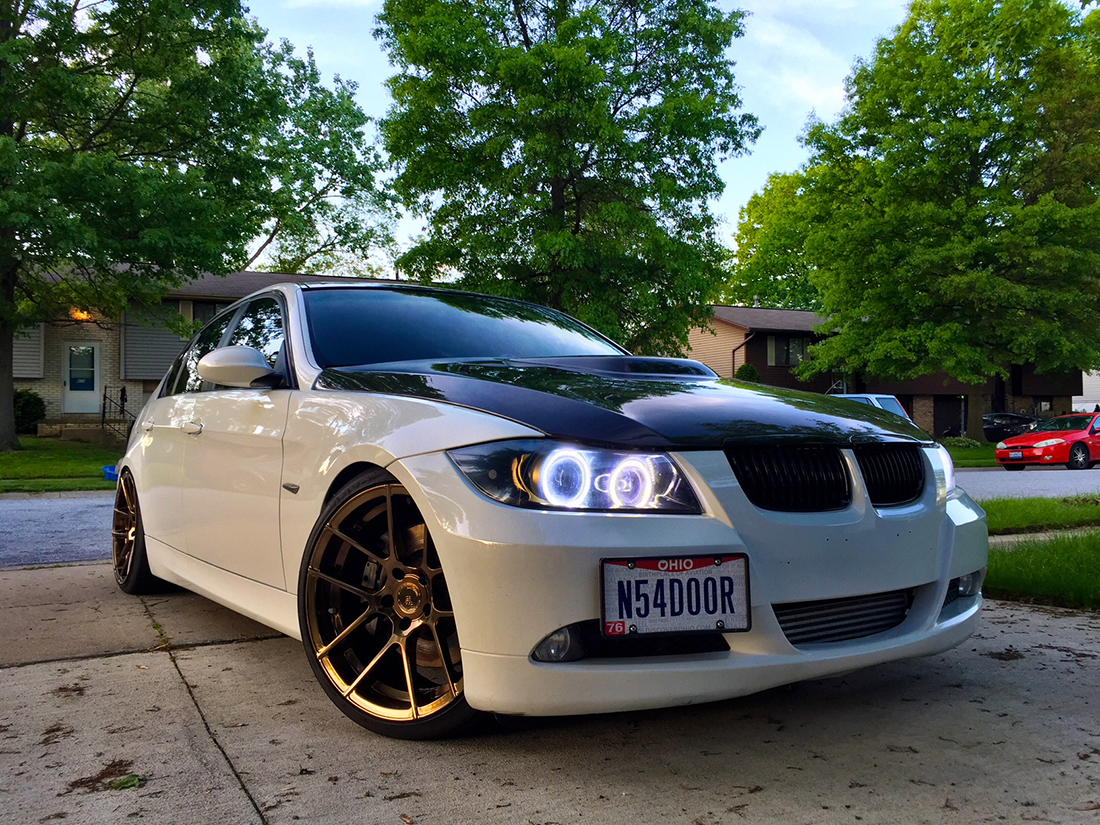 I approached Tim and requested that he give me the run-down on his BMW with the intention of understanding what it is like to daily drive a nearly 500 horsepower E90. He was more than happy to oblige and invited me to lunch where we were able to chat about his car.

The car in question is his heavily modified pre-LCI E90 335i powered by the (in)famous N54. This, however, is not just any E90. Tim is clearly a fellow who likes to push things to the extreme. Both he and his car have this palpable aura of curiosity to see just how far they can improve on what they have. Tim is a positive and excited guy who very clearly works at maximizing his physical potential, which explains why his car reflects that attitude. The E90 has been modified extensively from the suspension to the engine to produce as much street-drivable power as possible while retaining its utility as a passenger sedan. 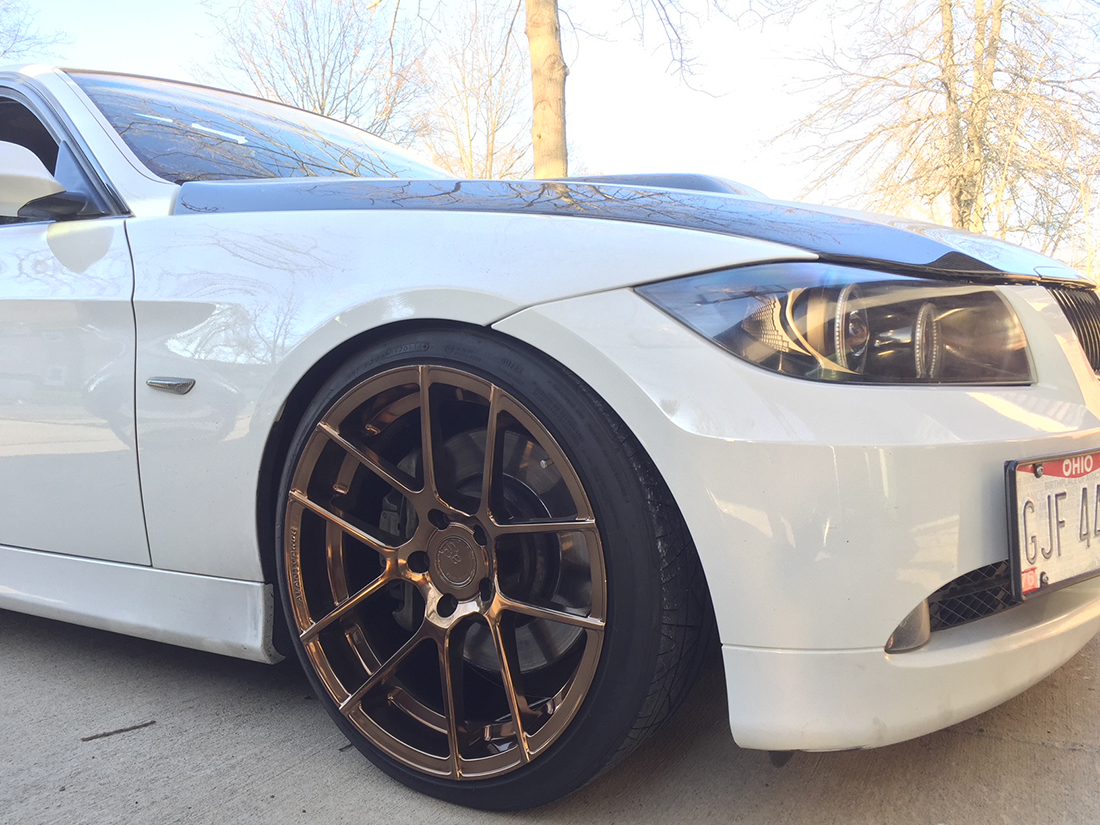 Although high-horsepower N54s are nothing new, (hell, the engine is over ten years old at this point,) Tim’s E90 seems to be the only one that has not experienced the issues for which the engine is equally well known. I was told there was a rocky relationship between Tim and his car as it has been under the knife several times and only sees the road somewhere around 50% of the time he needs a car. What I found, however, was unexpected. Contrary to my impression of power-chasers, Tim has a true understanding of how to take advantage of the N54’s potential without making sacrifices to drivability or compromising the car’s reliability.

He advised me that the common pitfalls with N54s are the impatient owners themselves, not necessarily faults with the cars. Yes, the N54 has wastegate issues and needs expensive walnut shell blasting to de-gunk the ports and valves, and the injectors occasionally spray fuel all over the engine, but it is otherwise the most usable German engine to rival the 2JZ or RB26. Again, the power capabilities of the N54 are news to no one, but the daily drivability that Tim’s car provides is something of a first in my experience. His work has quite obviously paid off, as the engine produced nothing but power and wonderful noises during our drive. I have driven a stock 335i sedan and was left unimpressed. This car, however, would completely change my mind. 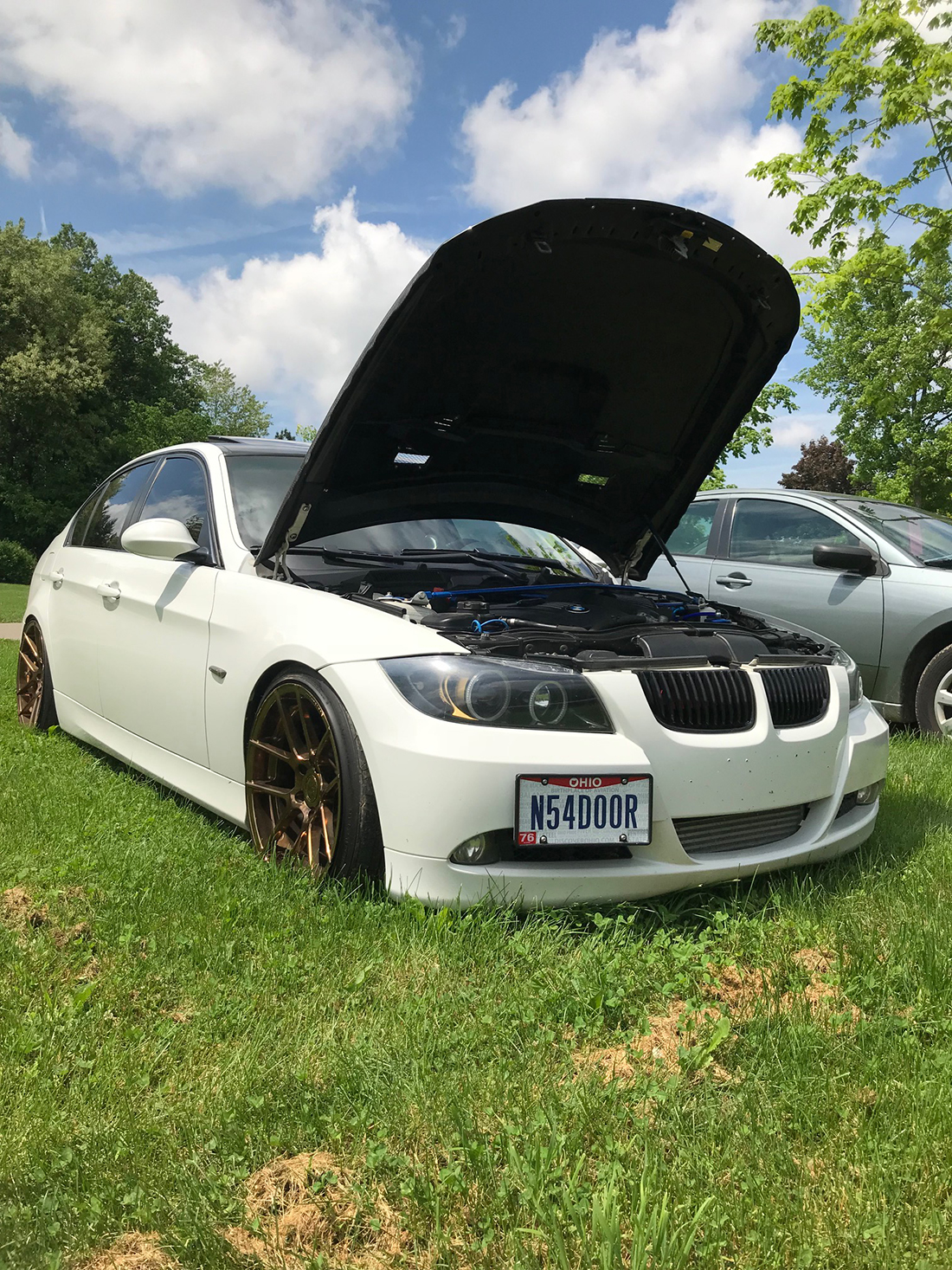 The most important part of building an N54, like many other high-performance engines, is to address any and all maintenance concerns before throwing more power to the crank. Tim walked me through some of his early years owning the car, which primarily consisted of maintenance related parts. The benefit of an engine that is notorious for certain problems is that you already know where to start: he took care of the pressing concerns early on and then began building for the reliable power output he produces now. Just like keeping yourself physically fit begins with the foundation of a proper diet, the foundation of any build is the condition of the car itself.

This seems fairly obvious, but the number of blown-up N54s for sale on Facebook and Craigslist shows just how many people decide to tune their car before it can take the extra power. Tim took care of everything major before he began to make improvements; all the while he kept in mind a specific power goal. He knew the clutch un=pon which he decided would only take up to about 650 horsepower, so his terminal power output had to be at or lower than the ability of the clutch. With that in sight, he set to improving the E90.

Under the car, you will find a set of Bilstein PSS coilovers that drop the BMW down on a set of Avant Garde wheels and sticky Nitto rubber. The suspension, as well as the Cool Carbon performance brake pads, allow the E90 to easily apply all 500 horsepower to the ground in an astonishing punch. Riding in the car is surprising, but definitely not scary like some I have experienced who forgot that going fast means you need to stop fast. The factory calipers paired with those Cool Carbon pads are plenty to reign in the car from a full-out sprint, which is impressive, to say the least.

Powering the car is the Frankenturbo-equipped N54 which is fed a steady diet of methanol and upwards of 20 pounds of boost. Right now, according to Tim, the car sits conservatively around 500 horsepower on its JB4 tune and the current settings. However, with some minor modifications, the Frankenturbo Rev3 twins can push more pressure and the timing can be adjusted to make close to 650 horsepower, which is his present goal. The meth-injection kit for this car is one of my favorite modifications because it adds power as well as reliability. As we mentioned, the N54 is known for gumming up its ports with carbon buildup. Steam cleaning the engine with a water-meth bath is possibly the best form of preventative maintenances one could apply to an N54. One that also provides 1600cfm of power-boosting explosions. 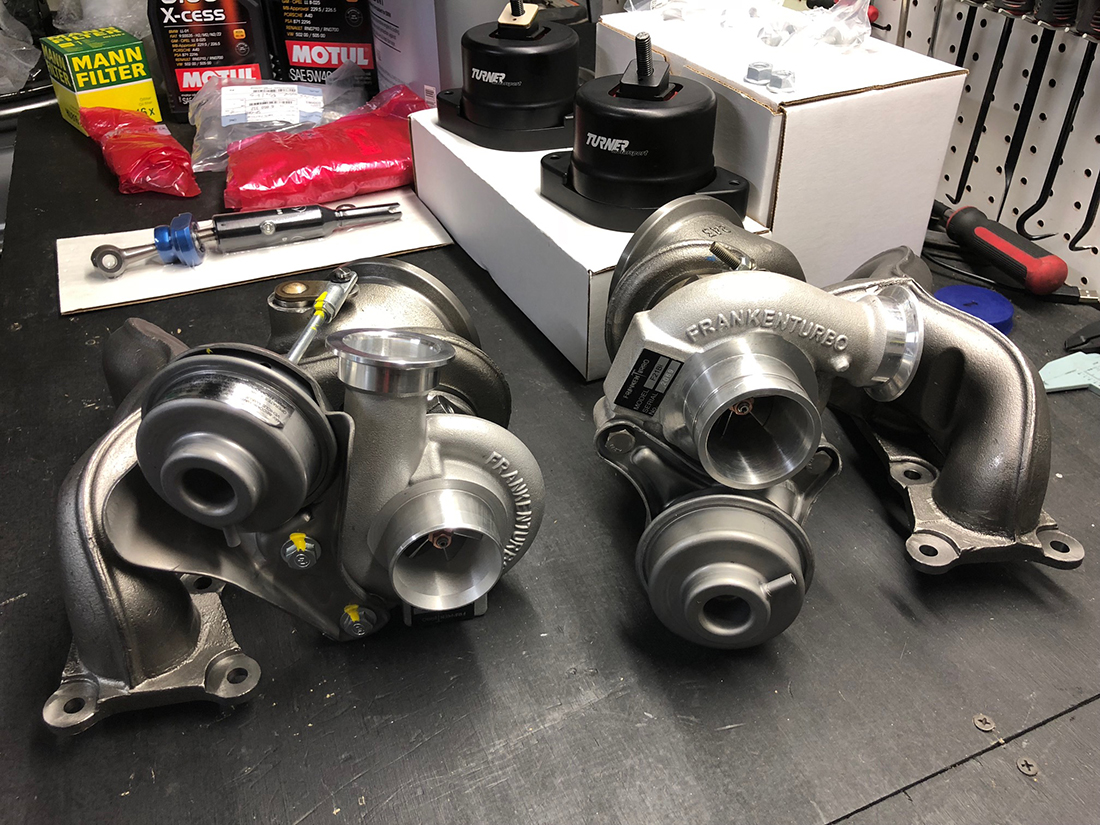 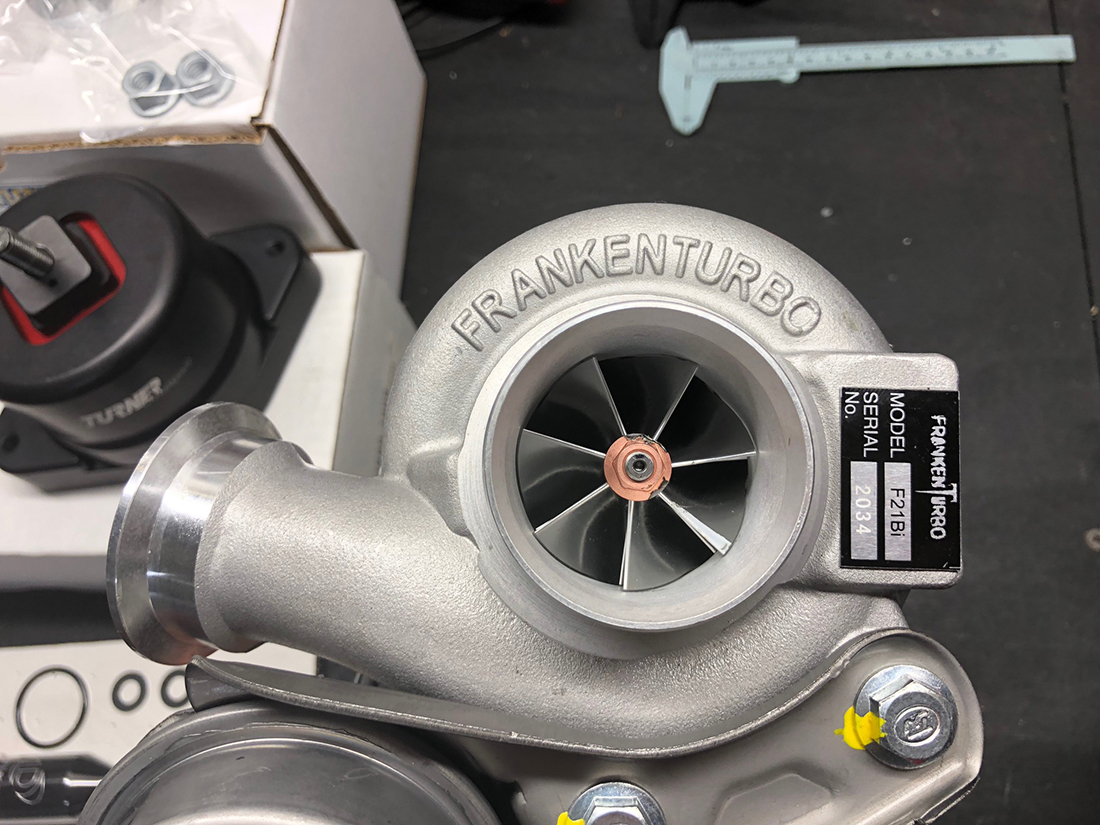 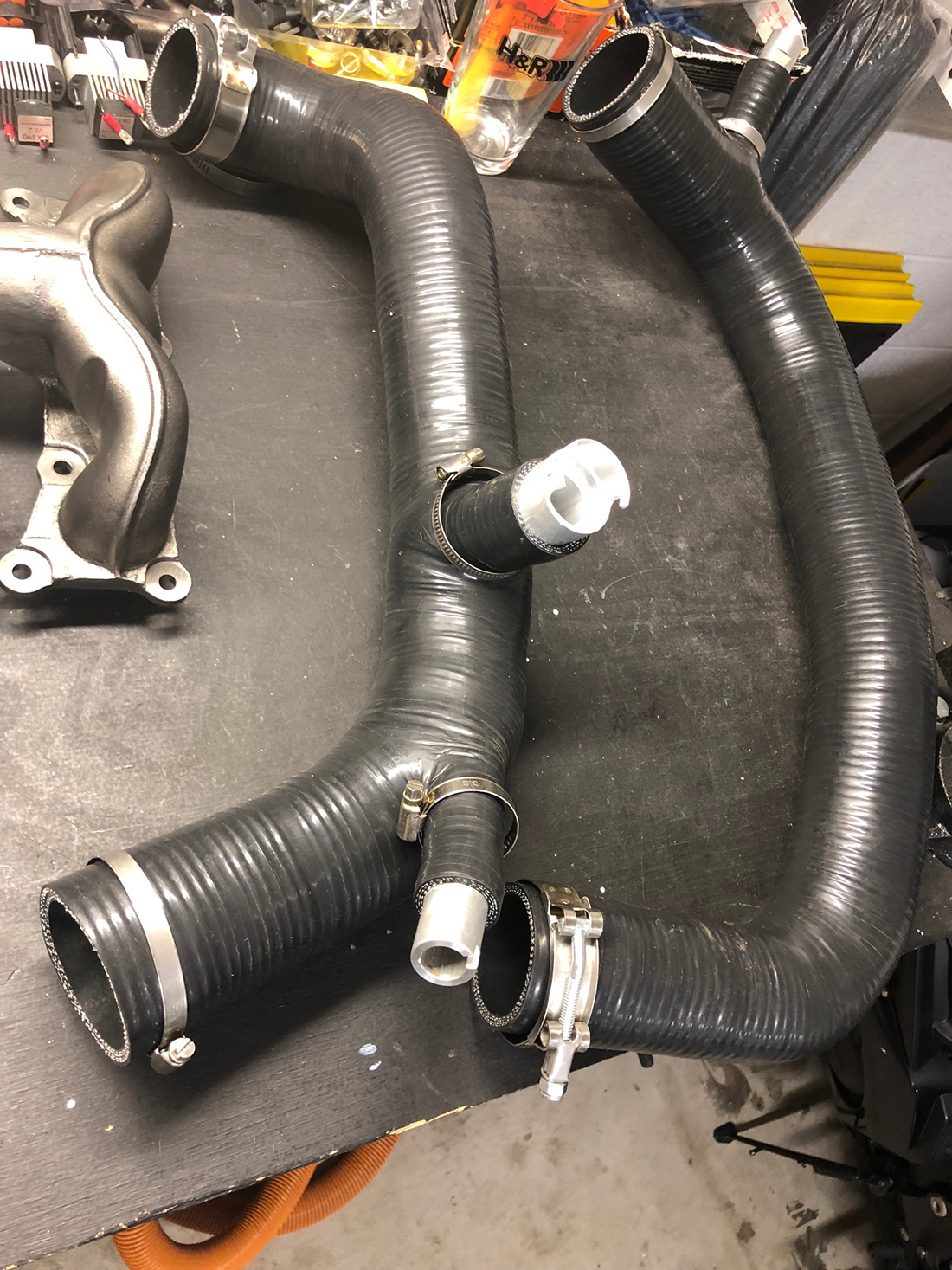 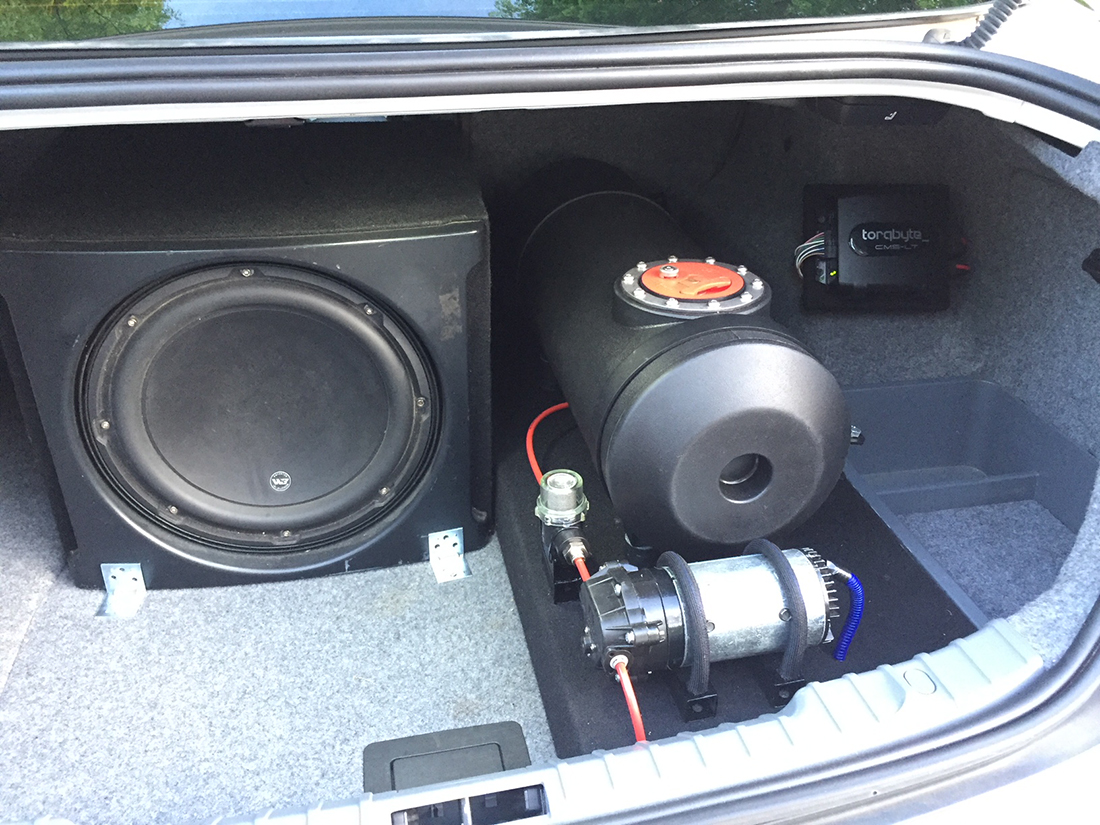 After showing off the neat and tidy engine bay and walking me through all his modifications, we hit some back roads to take the long way for some lunch. Despite a carbon fiber hood and trunk combo, as well as the wheels and stance, the E90 still is not what I would call ‘attention demanding’. It is quiet and fairly unassuming until Tim puts his foot down. The car is completely tame and feels similar to any other 3-series at normal driving speeds, but a depression of the throttle utterly transforms the car with a massive squeal from the Tial BOV between shifts. Even with larger turbochargers, the boost is nearly immediate. This lead to some eye-widening accelerations as Tim pinned the both of us to our seats with an all-out pull.

Since the E90 is a sedan, it is usable on a daily basis for regular errands and work commutes. I had difficulty picking out normal sacrifices present in most other modified cars when we were sticking to the speed limit. When Tim punched it and the car rocketed down the Wadsworth back roads, I still couldn’t find anything that just stuck out as hard to live with. I actually had to ask if there was anything that made the car inconvenient after he had modified it to this extent. Surprisingly, Tim had trouble thinking of anything himself. Besides the amount of work that he invested in making the car what it is, it has never left him stranded or given him trouble as a daily commuter.

His goal, besides big power, was to have something he could enjoy driving at any speed, regardless of the trip. He wanted a car could take to work, shows, or the track without a moment’s hesitation. With the current setup, his car handles exceptionally well and provides more than enough power to get anyone into trouble, but doesn’t punish you for driving it that way. The four-door layout gives the E90 a utilitarian side and makes it something Tim can take anywhere without changing cars. This is in line with his ultimate goal of having one car that really can do it all. 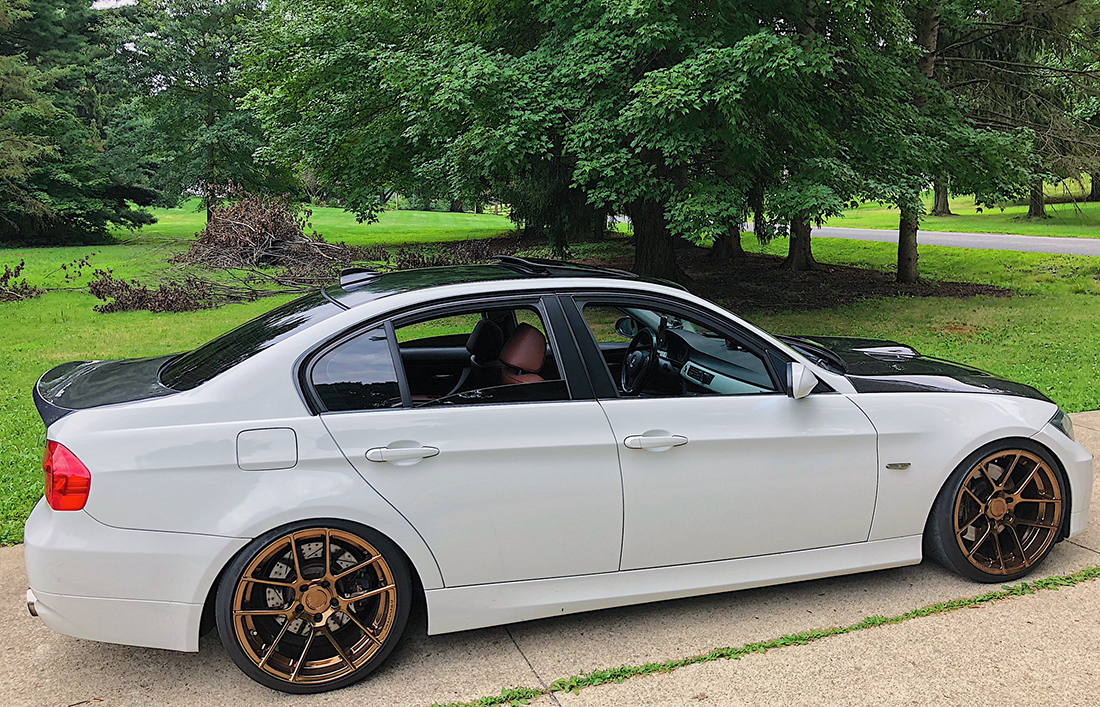 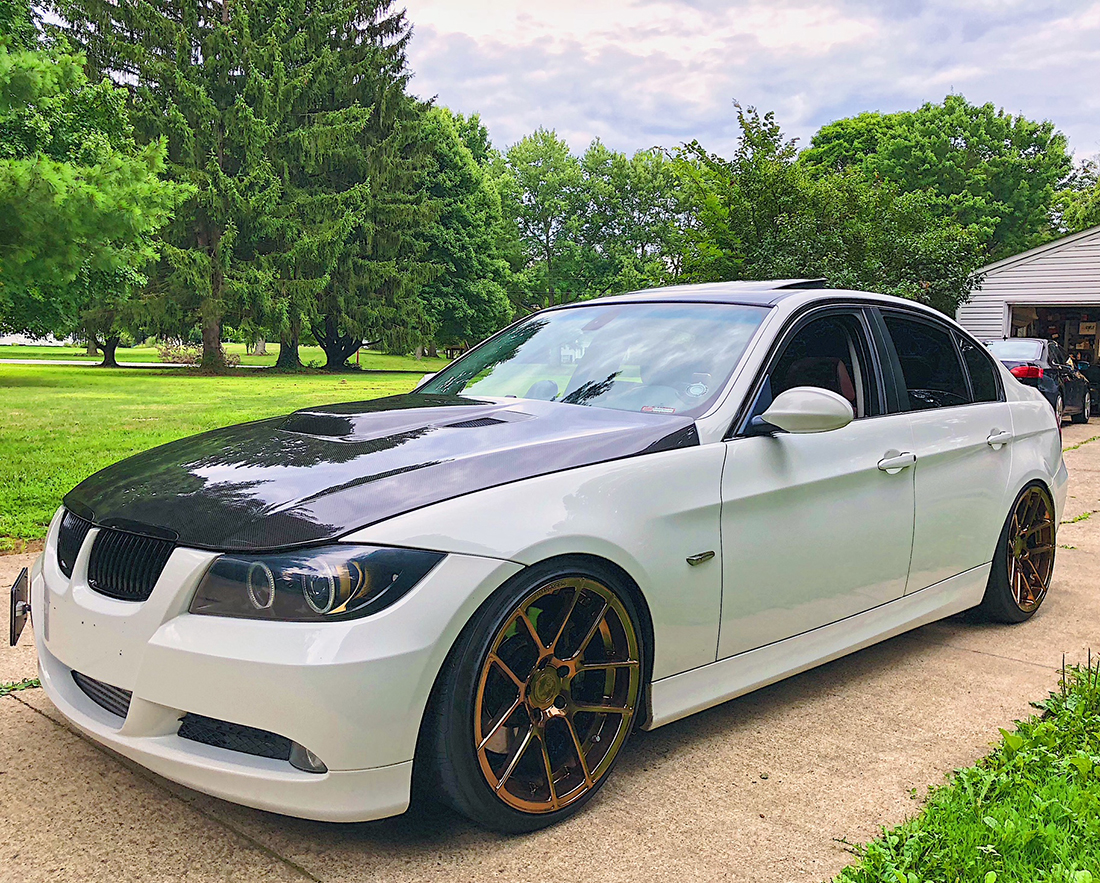 Thanks to modern technology and the help of manufacturers who develop parts for the E90 platform, he has been able to realize that goal. The E90 335i is realistically limited in the amount of power you can safely pull from the engine, but Tim is determined to reach that threshold. His dedication and commitment to finding the true potential of the platform without extensively modifying the frame or switching engines speak volumes about his personality, which fits exceptionally well with his chosen car. For the last few years, it has undergone many revisions to bring us the powerhouse I had the pleasure of experiencing, but the spirit has remained true. Tim aims to find the upper limit of his E90 while still using the car as his daily. Thankfully, that power goal may happen sooner than later, as he plans to adjust the tune and throw the car on a dyno in the near future. 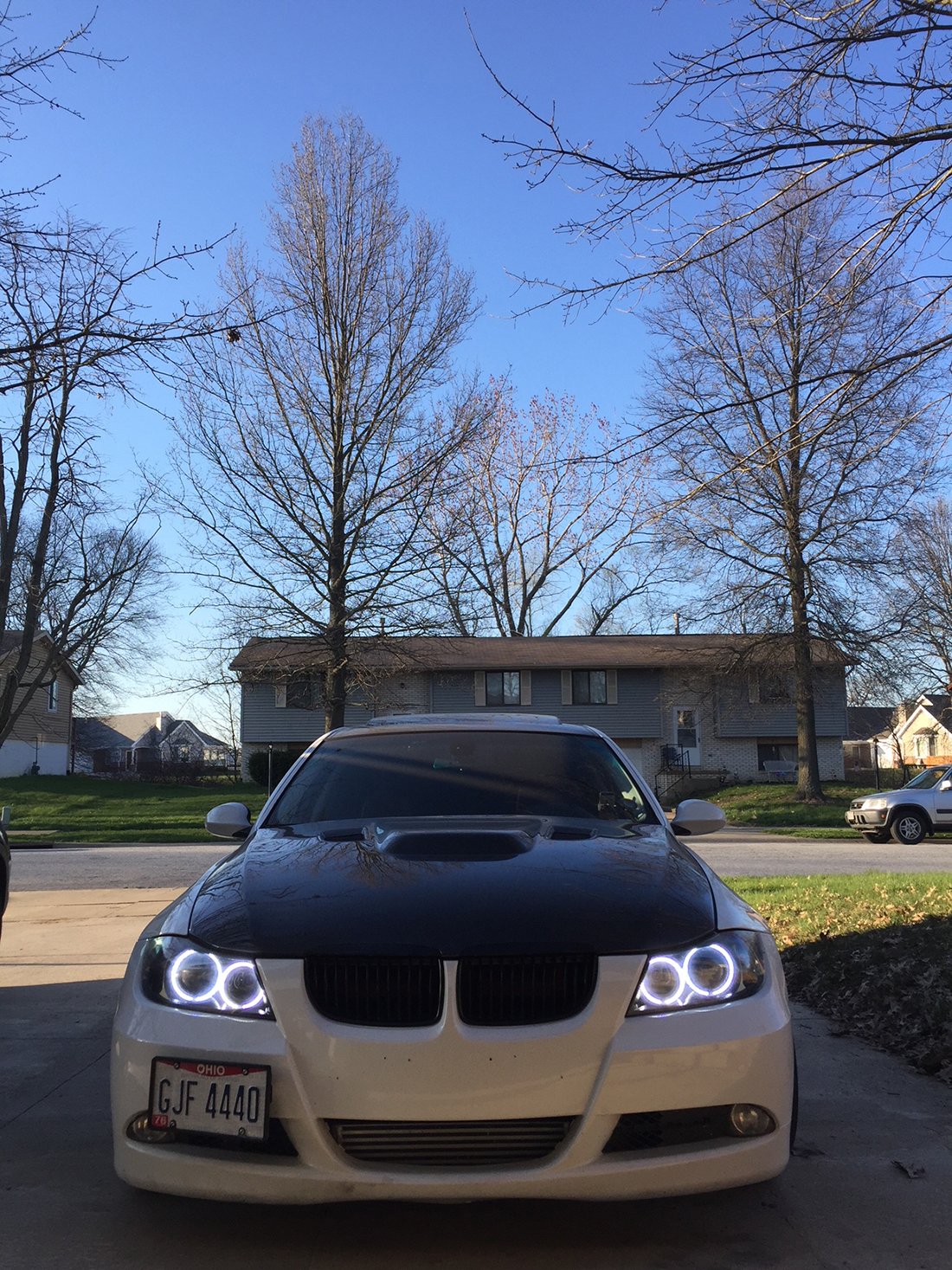 With our drive over, it was sad to say goodbye to such a wonderful car. As a vintage car enthusiast, it takes something special to make me think so deeply about a contemporary car. Speed and power have never been as intoxicatingly tantalizing as they were sitting in the saddle-brown interior of Tim’s E90. The car is well balanced between its excitable N54, the planted suspension, sticky tires, and high-energy driver. This E90 is the perfect example of one car that does it all, which truly reflects its owner. I look forward to seeing the car reach that 650 horsepower mark, and you can be sure we will cover that breakthrough when it happens right here at ECS Tuning.