There are two ways to purchase those rare and desirable parts for our cars. Enthusiasts can either pay out the nose for brand new parts (if they are still available) or search the internet for used parts to save some coin. If you are the thrifty kind, or just on a limited budget, it can be better to purchase used parts instead of going new. The trade-off for scoring rare or high-dollar parts on the cheap is often that the parts are in less than desirable condition, however. Sometimes you just have to look a pile of work in the face and know it will all be worth it in the interest of having those parts you otherwise couldn’t afford. Such is the case with Ben and a set of O.Z. Racing Futura 3s he picked up at a staggering discount.

While he was browsing the internet looking for parts he needed to finish the 1984 E24 he is restoring, Ben came across these Futuras. The ad asked for a price that had to be a mistake, but Ben made the call. A fellow driving a ‘well-loved’ Bronzit E34 showed up, dropped off the wheels, took a few $20’s, and was on his way. The wheels were in alright shape physically, albeit, caked with 27 years of brake dust and displayed the battle scars of many encounters with curbs. They were definitely worse for wear but repairable with some hours invested in hand-restoration to bring back the wheels from the trash heap. 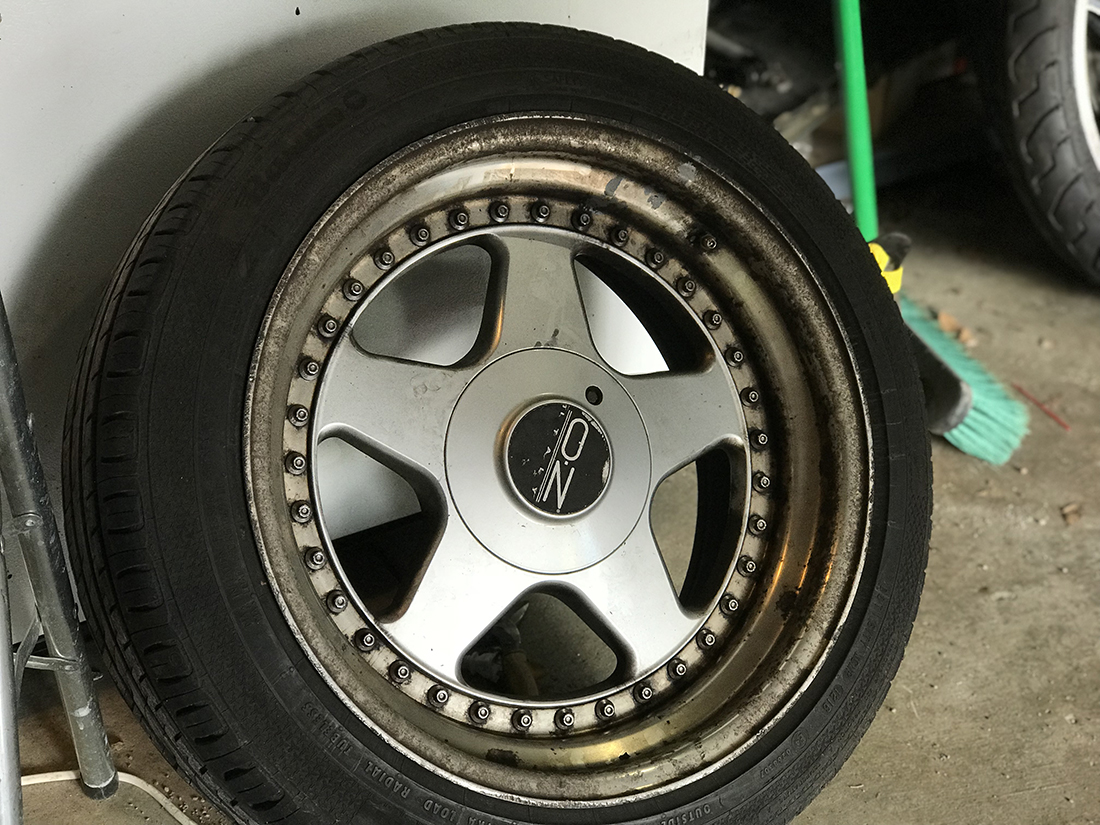 Fortunately, with our Rallywagen ‘Slammed to the Arctic’ trip concluded, the experts from SONAX were around ECS this past week. They cleaned our beat-up Jetta and showed off some of their newest products. This gave me the opportunity to ask if they would be interested in putting some of their wheel cleaning products to the test with the nasty Futuras. They happily agreed and tossed me some Wheel Cleaner, Engine Cleaner, and Exterior Polish to take down to Cincinnati. With their cleaning products in-hand, I drove down to jump into a massive wheel restoration job with hopes that SONAX would make it a little easier. 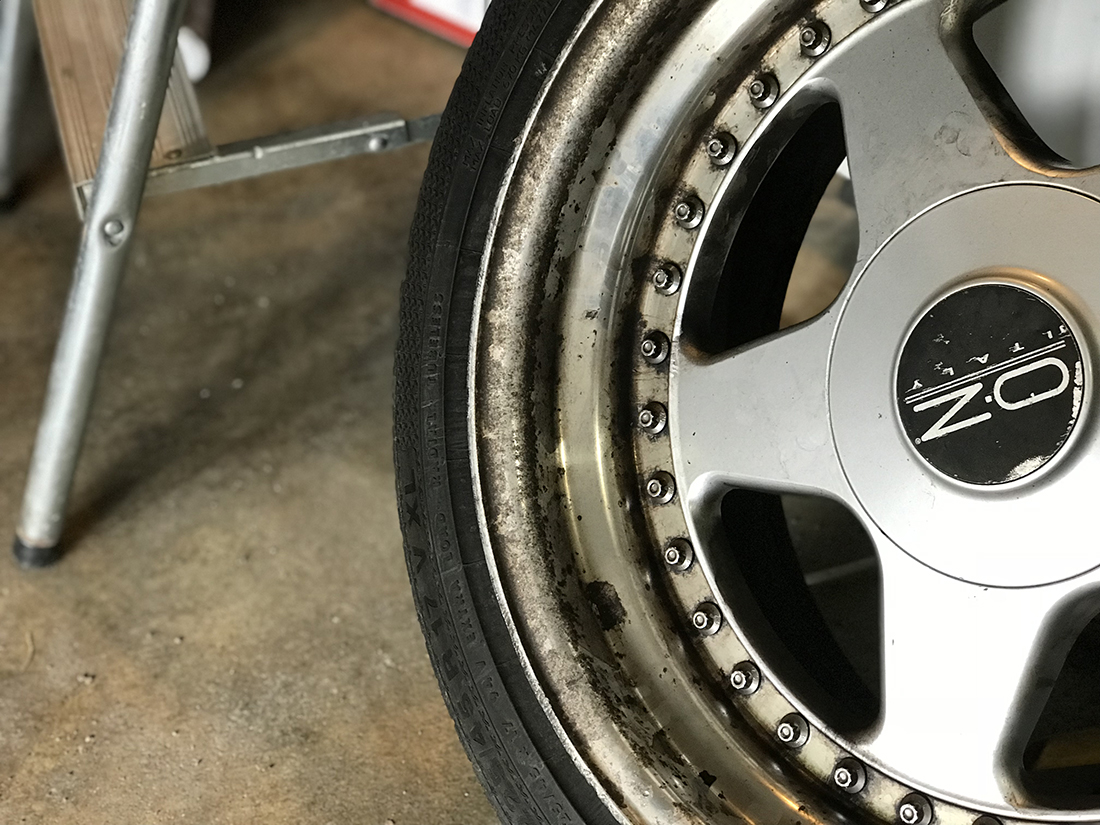 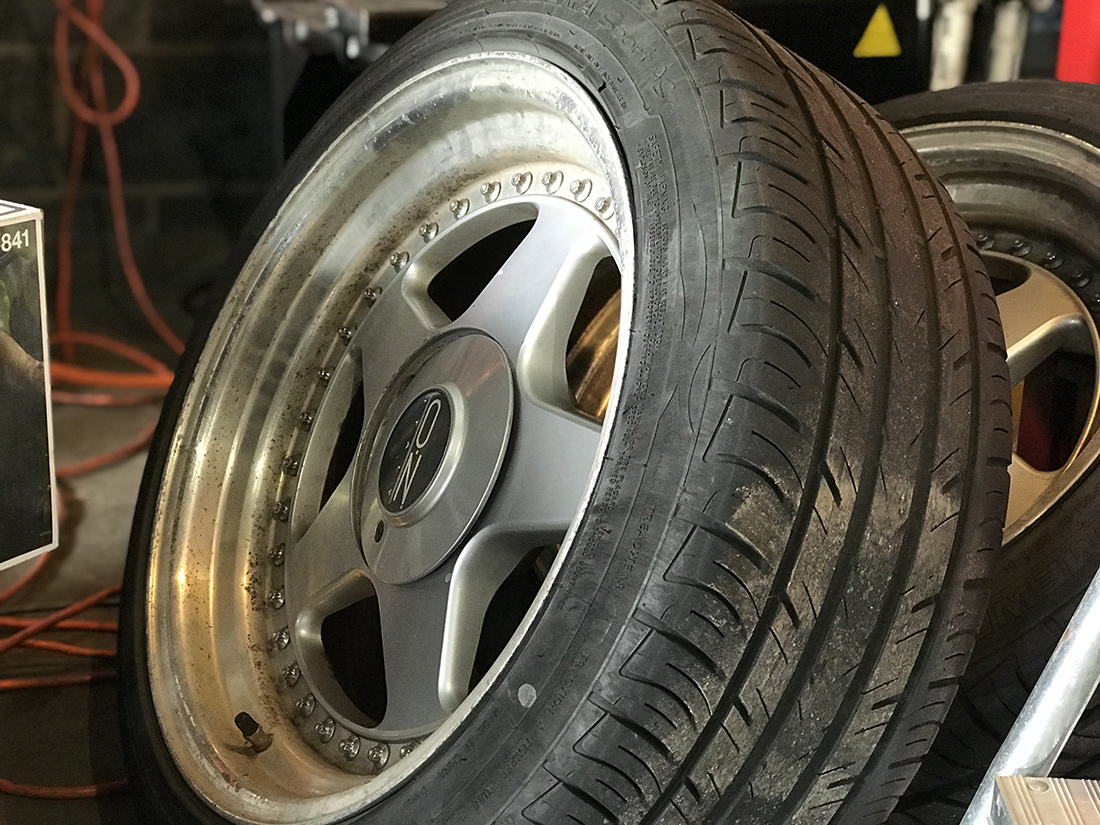 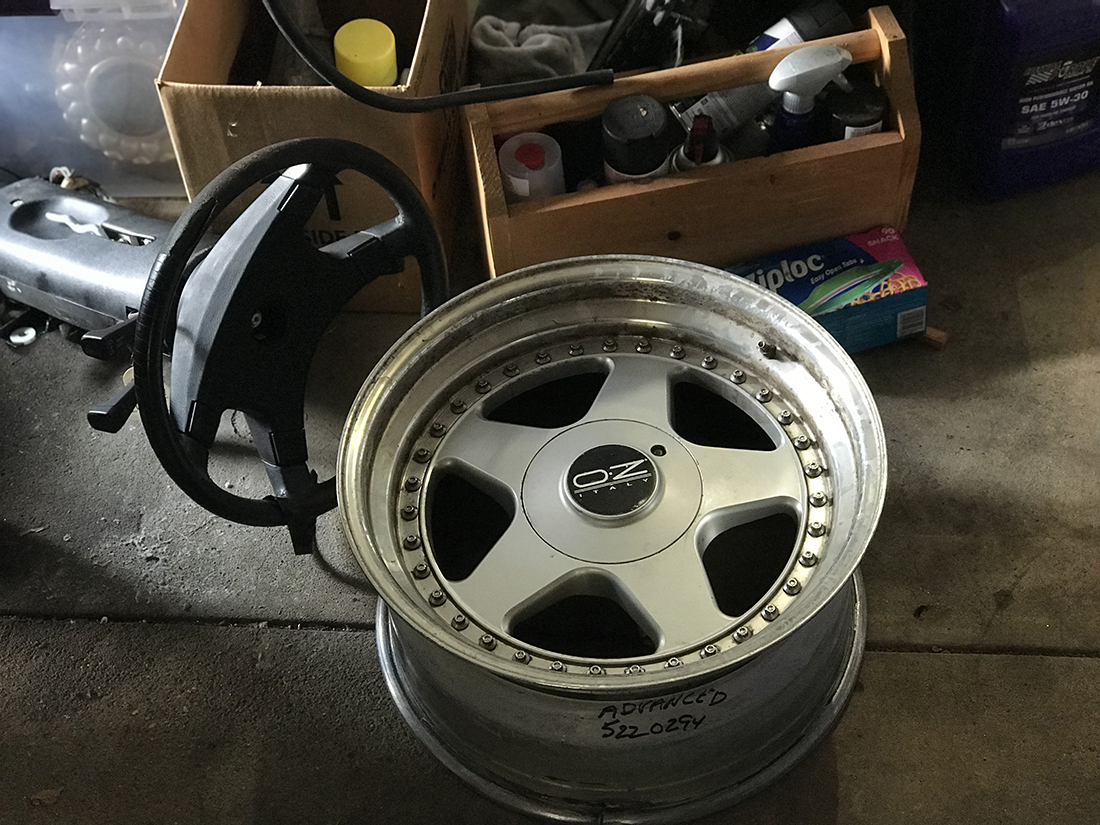 I love wheel repair. Rare, vintage, or otherwise obscure wheels are tantalizing to me. The thought that I can help save a set is an incredible motivator, but I still knew I was in for hours of backbreaking labor. What’s more, when I arrived in Cincinnati, I discovered that my friend’s tire machine had recently broken. That did not allow me to remove all the tires in order to split the wheels safely and correctly, so cleaning and refinishing them took on a new challenge. I had to work around the hardware and do my best to refinish the wheels for a good ‘phase one’ and just wait to complete them at a later date. 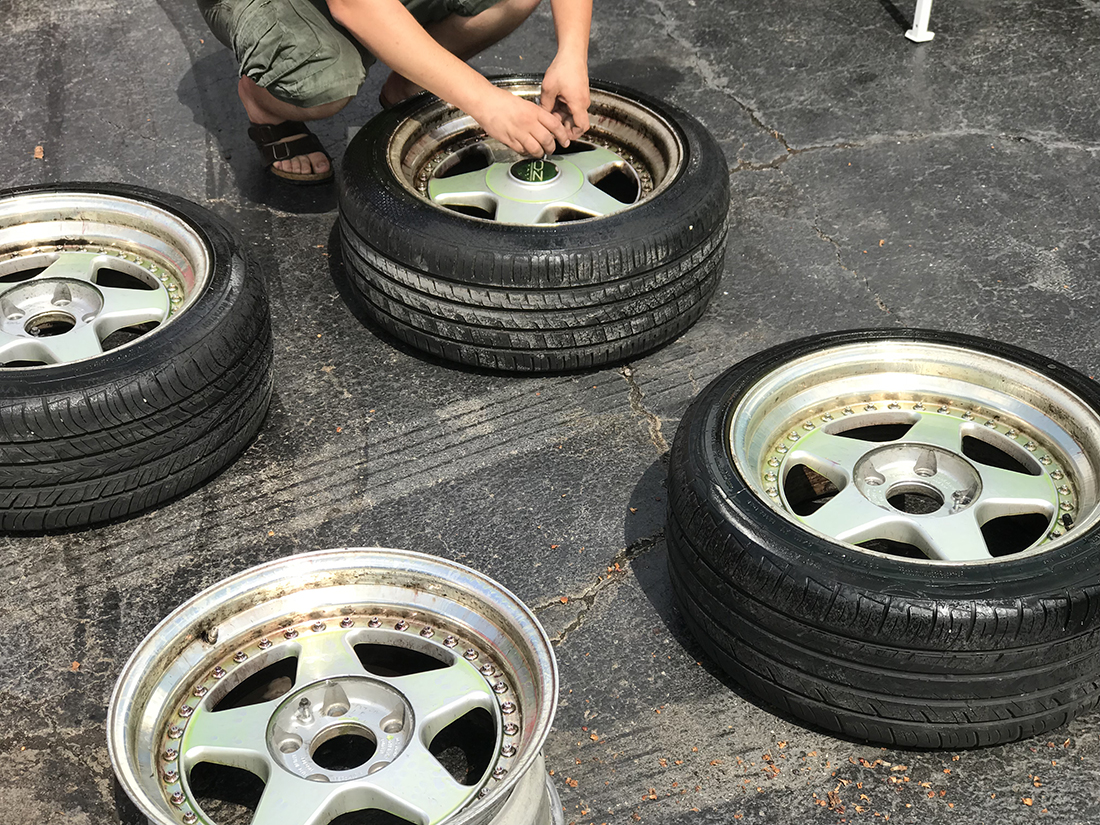 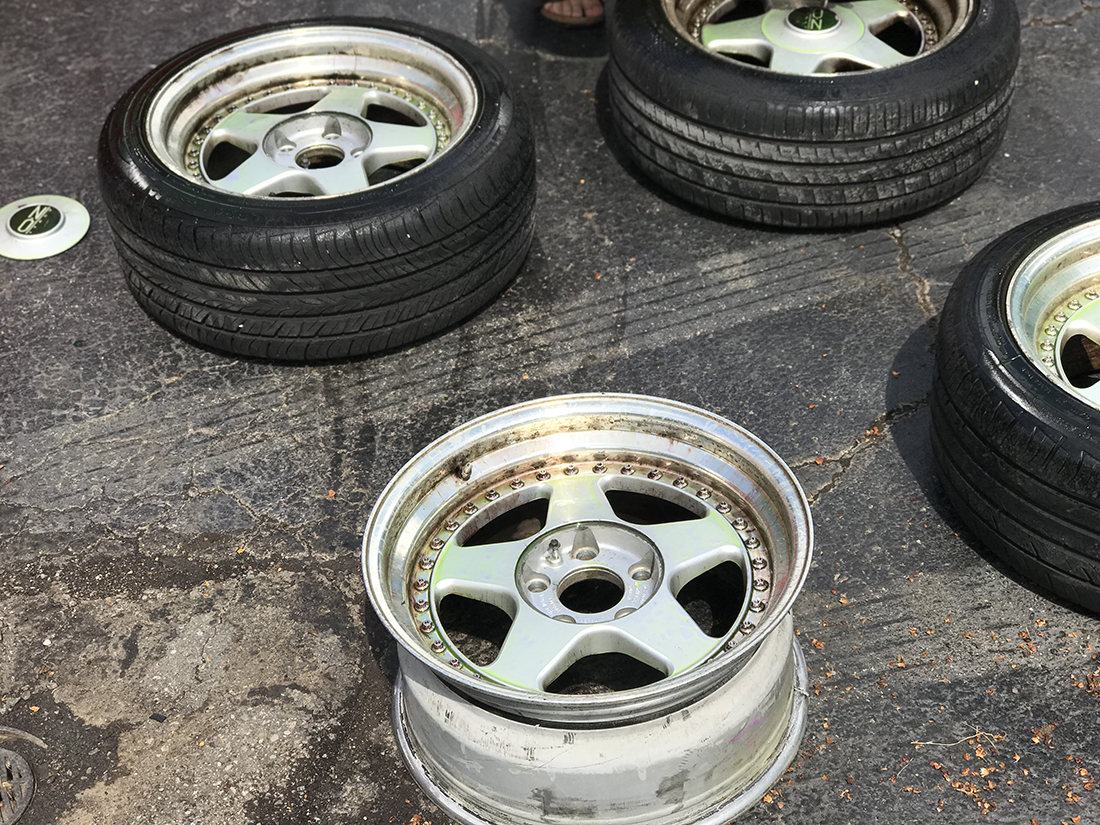 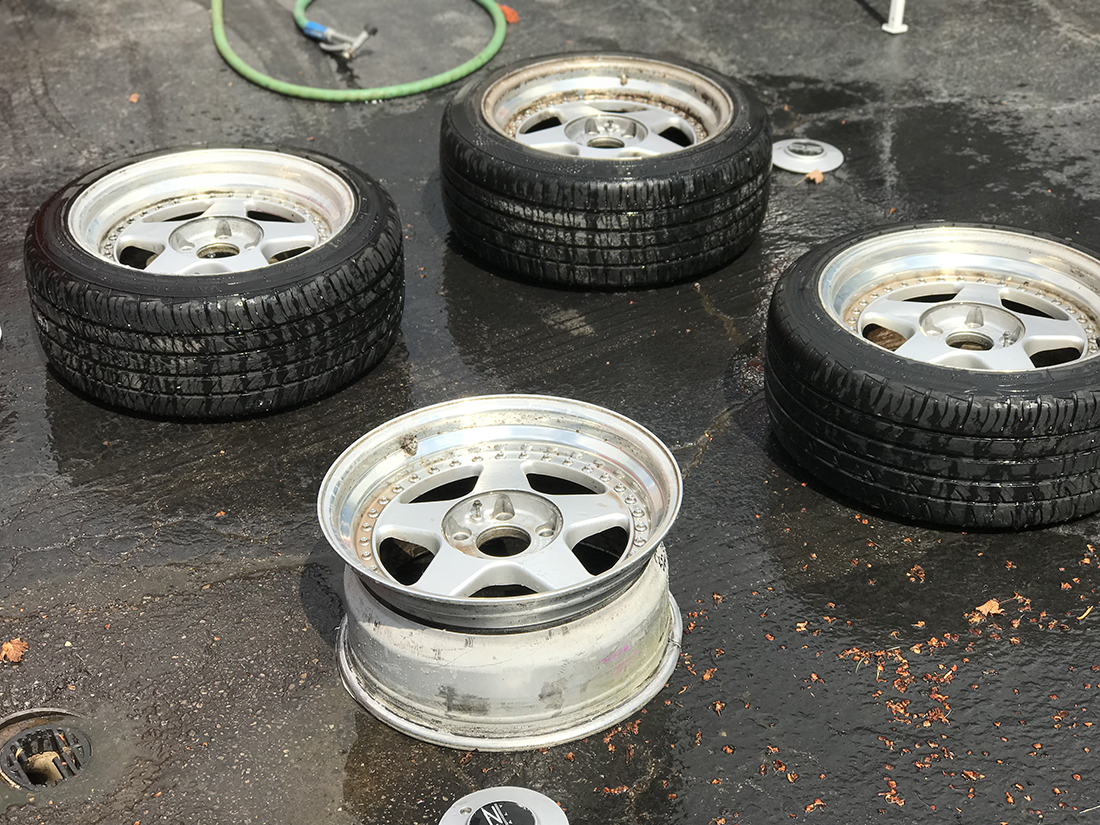 Despite the setback, I dug in. I didn’t think I would be able to do as much as I had hoped initially to begin the restoration process, but the SONAX wheel cleaner reinvigorated my interest as I used it. The initial wash was a hefty coating of the provided Full Effect wheel cleaner all over the inside and outside of the Futuras. Judging by the dates on the wheels, our estimates are that the wheels have been weathering for nearly three decades and suffered from some of the worst corrosion we had seen. The few minute wait for the SONAX cleaner to turn from green to magenta passed and we saw the brake dust and grime begin oozing off the wheels. The pink reactive color took with it a surprising amount of dust; enough that I took advantage of that rejuvenation by diving deeper into the repair. 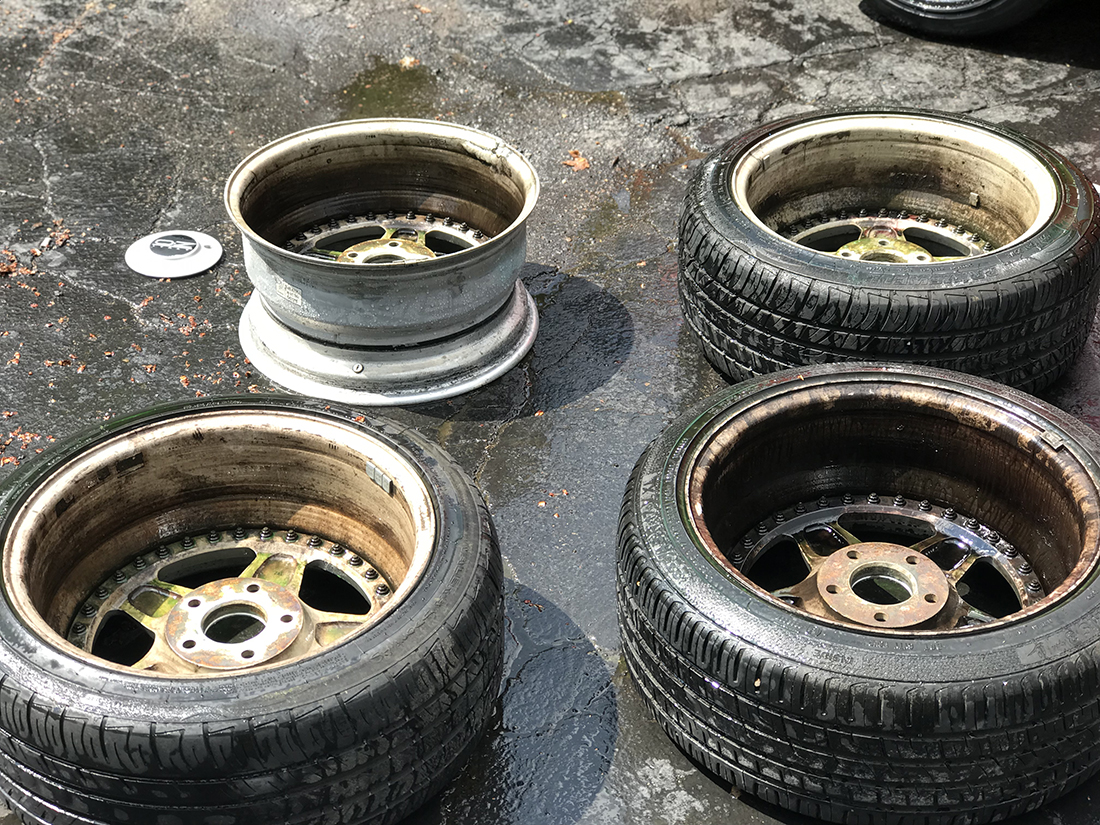 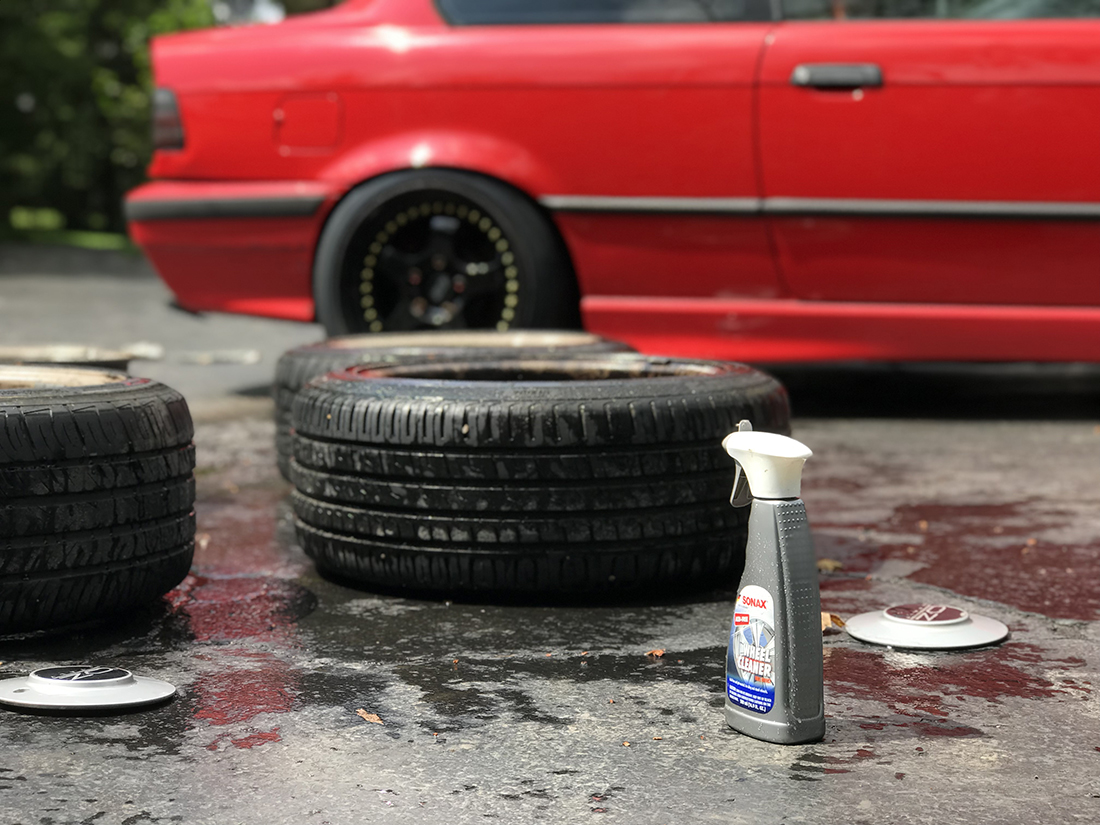 Ideally, if you take care of your wheels, one good spray down and a rinse off afterward would be all that is necessary to bring back the like-new shine. With these wheels, the initial cleaning required a few soaks with the wheel cleaner, several rolls of towels, and many cold beverages. After nearly an hour, I had the wheels ready for the next step in the process. They already looked like different wheels than the ones I began working with, but still needed extensive attention.

The lips and barrels on these Futuras were mirrored, but the finish and coating were absolutely thrashed. With Ben’s approval, I stripped everything I could off of them for a hand-polish. In my experience, wheel repair is tedious but rewarding. After the initial wash, you can begin stripping. I took some steel wool and removed as much of the remaining grime I could, then switched to a 600 grit wet-sand to remove everything else. I worked in sections, but maintained a long, low-pressure, glide over the lips and kept to the contour of the steps. The goal is to get down to ‘new’ material, then polish in stages from there. With the whole lip stripped, I focused my attention on the curb rash that plagued the rim flange. A Dremel tool and conical grinding stone bit are your best friend when flattening rash. I again worked carefully to maintain the soft and rounded edge of the flange, and slowly smoothed the rough rash out of the lip. 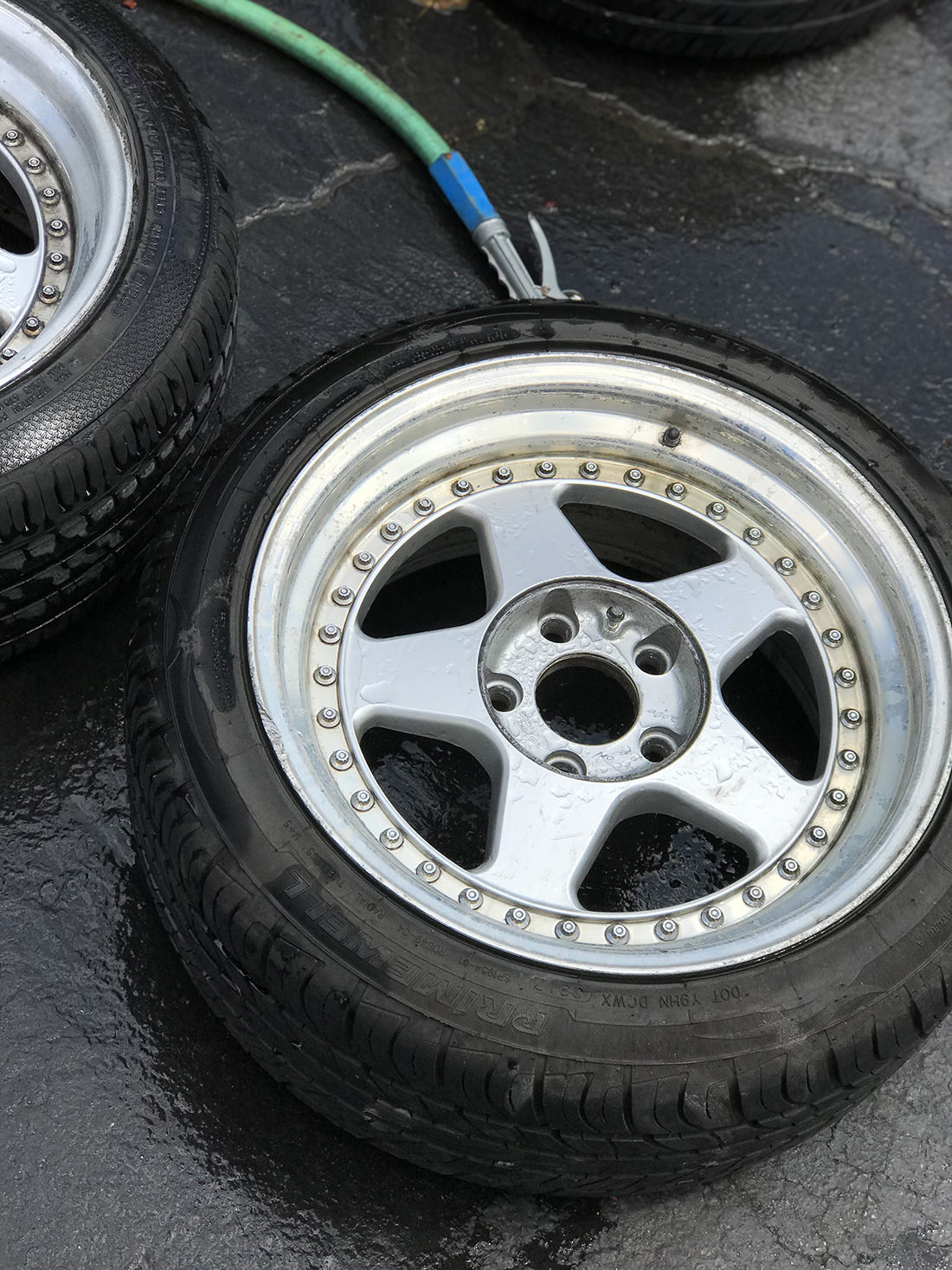 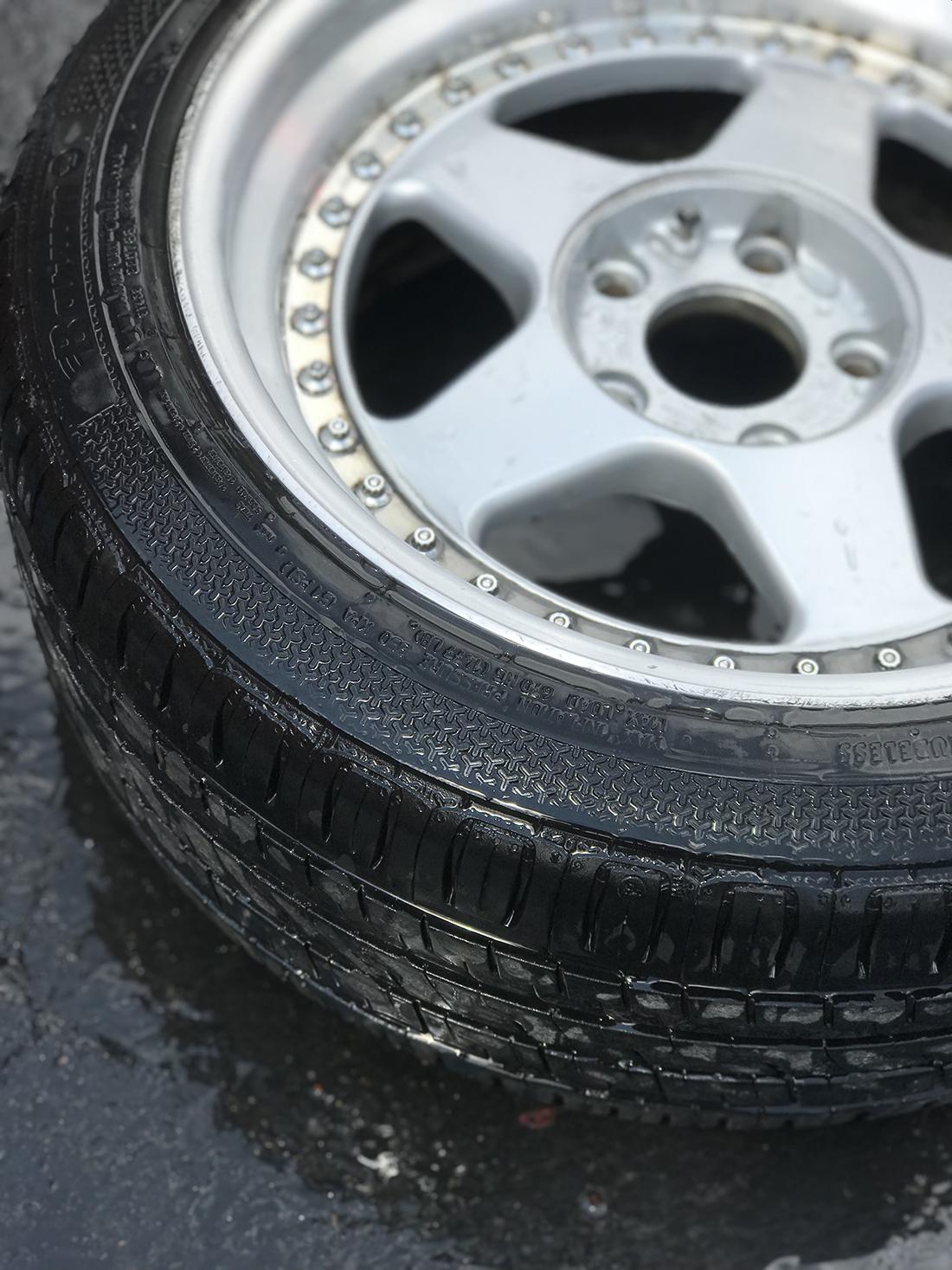 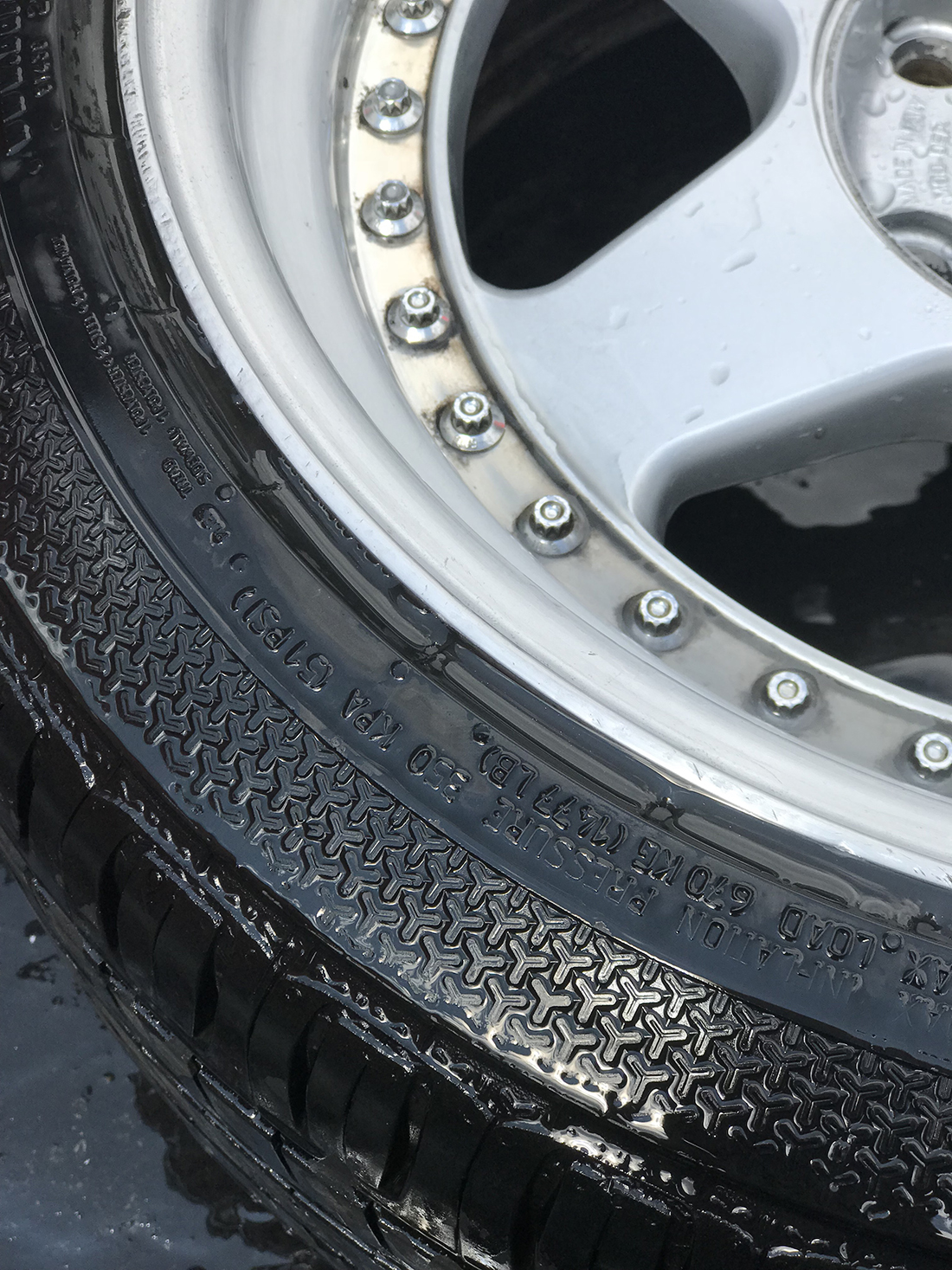 With the pits and sharp peaks of curb rash eliminated, I once again took my 600 grit and further smoothed out the rim flanges before I moved to an 800 grit. The trick is to not use much pressure and let the abrasive surface of the sandpaper work for you. I make several passes, each one covering more distance than the last, around the lip. You want to avoid leaving any streaks or swirls as you work up to the highest grits for the finest, most consistent, polish.

Finally, I began to work my way into 1000 grit, then 2000, and lastly 4000 grit for the concluding steps. While I was not able to do a full restoration as I had initially hoped, I was able to take these O.Z. Racing wheels from horribly disgusting to something you could put on a car without feeling utterly terrible for doing so. The night and day difference was a painstaking process, and there is still more work to be done, but the overall job was made exponentially easier by the SONAX cleaner. Normally, hours of hand-cleaning is required. Even when I have used ‘similar’ wheel cleaner products I have found that the longest part of the restoration is cleaning the wheels to a degree that allows you to confidently begin to sand and polish. The SONAX Wheel Cleaner Full Effect shaved hours off of the total time and allowed me to cover more surface area in a shorter amount of time, which left the wheels in considerably better condition than when I arrived. 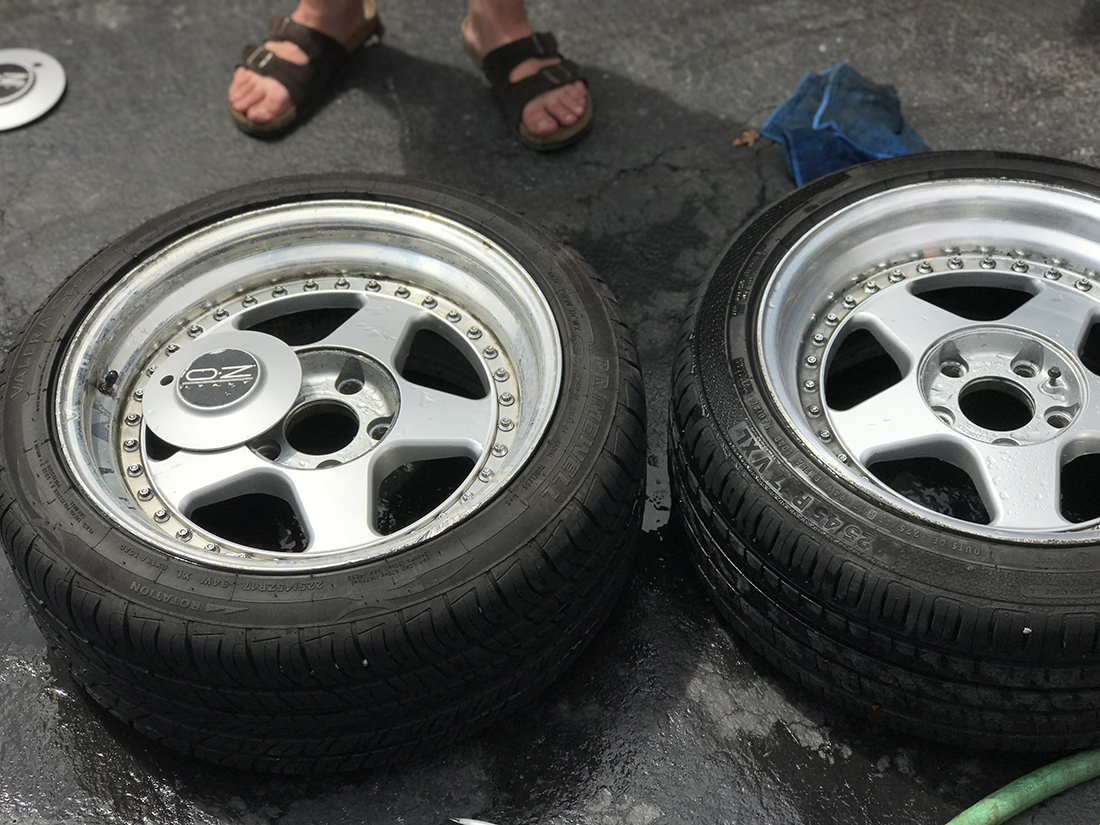 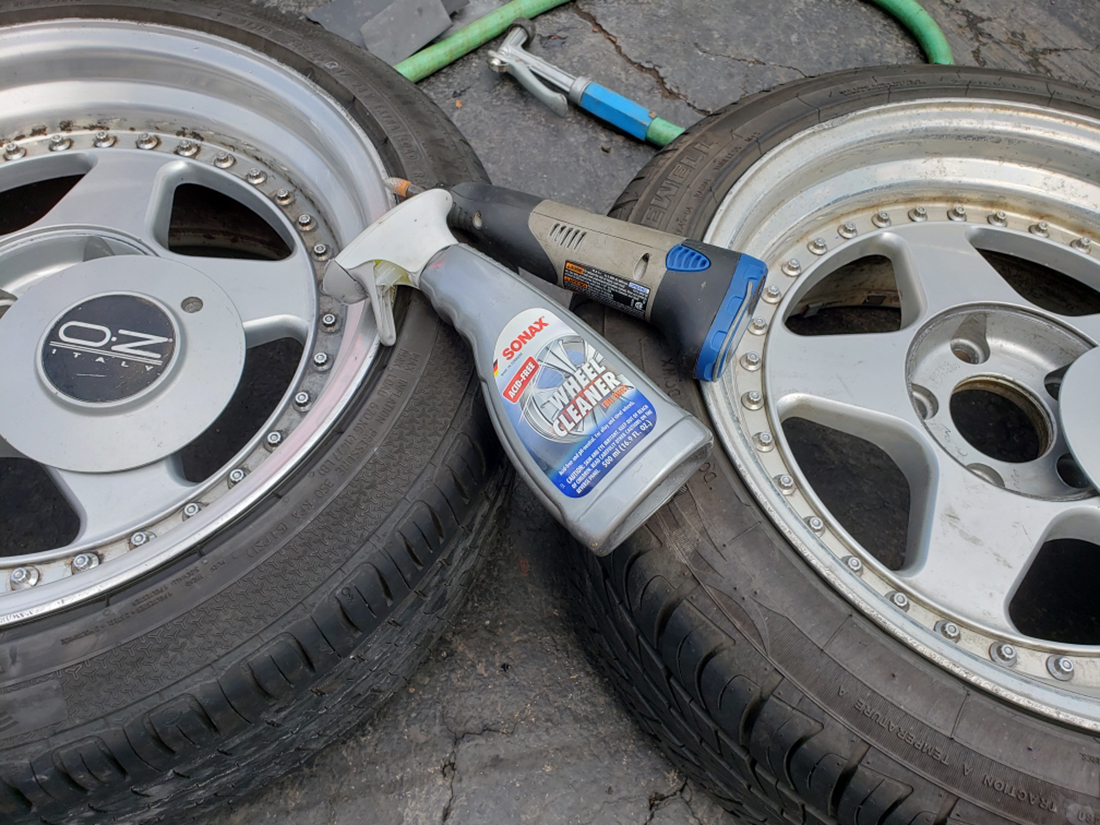 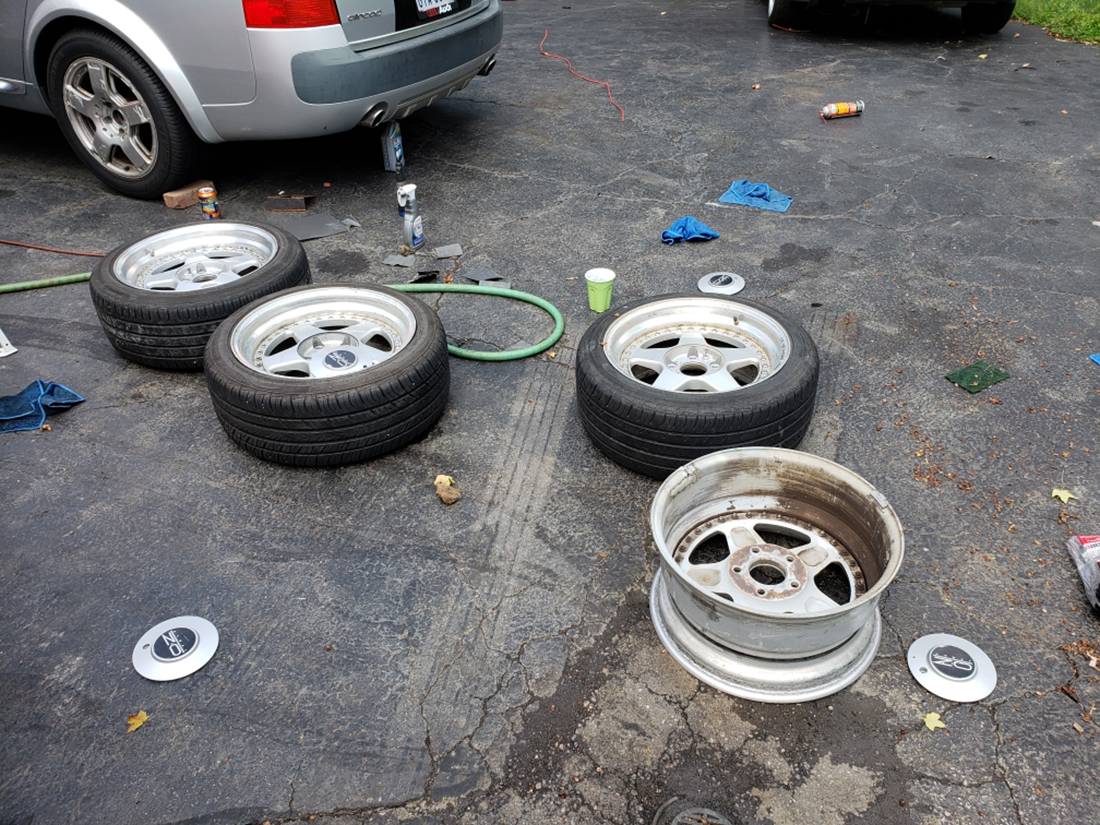 The fingertip-ruining process of wheel restoration is a worthwhile sacrifice to make in order to bring back a set of obscure wheels from certain neglect and destruction. Nothing feels more satisfying than scoring a set of rare parts that just need some love to make them something beautiful again. The things we do for our builds, like scour junkyards, the internet, and swap meets for parts that just need more work once we find them, provide a gratifying victory. With SONAX, I was able to feel victorious that much sooner with slightly less effort on my part but kept all the reward. We highly recommend anyone with a similar goal of restoration rather than replacement check out the SONAX product lineup for the best in cleaning and detailing products around.