What does it mean to be a ‘car enthusiast?’ For many, the term is almost interchangeable with a title of superiority in conversations about automobiles. Especially when those conversations involve the introduction of cars built for efficiency, comfort, space, utility, and a price point. What is even more intriguing than the term itself is the attitude of certain enthusiasts who constantly pine over old generations of an extant car model that they claim embodied more of the ‘driving spirit’ or ‘motorsport heritage’ than they claim the current iteration does. BMW fanboys, I am looking right at you when I say this. For the Volkswagen crowd, I do see a bit of the same. Hell, if you were to ask me whether I would like a brand new MK7.5 GTI or a MK1, I’d be hard pressed not to say ‘I’ll have the old slow one, thanks.’ Car enthusiasts, however, by definition just love cars. Evan, the owner of this tastefully touched-up MK7 Jetta 1.4t R-Line, is a real enthusiast. 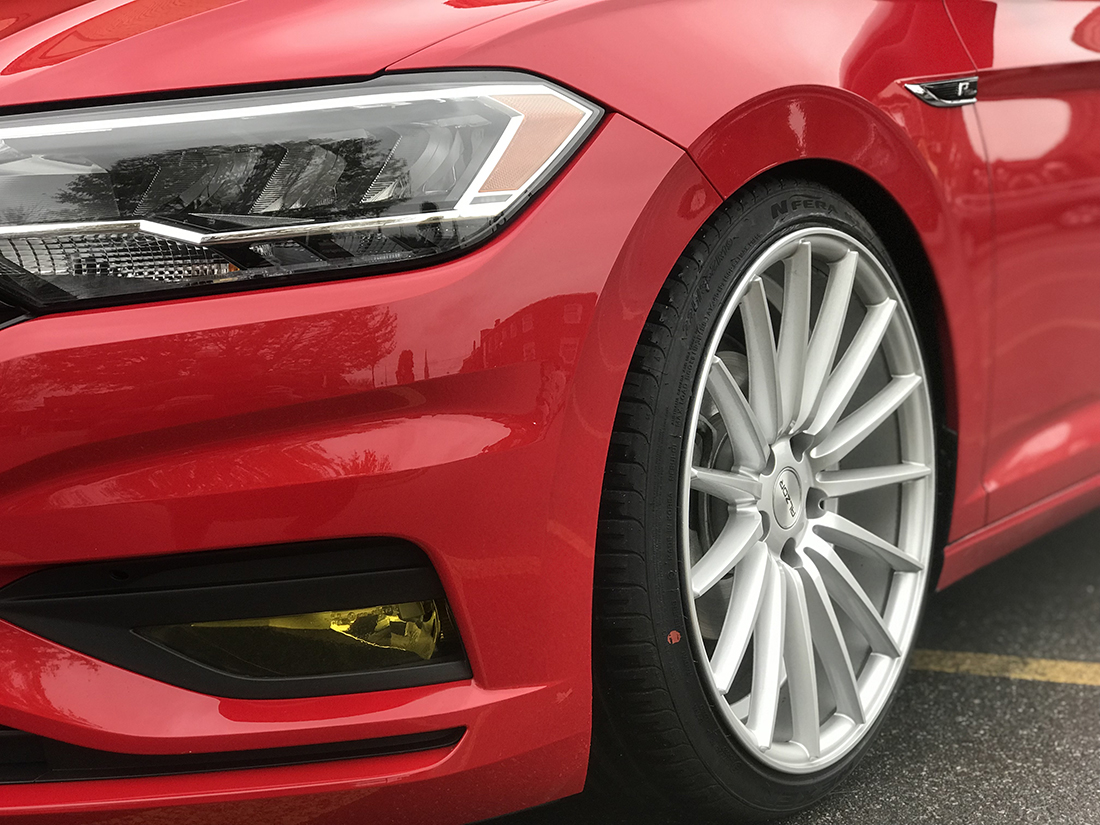 Before you scratch your heads at how someone could call themselves a car enthusiast and then turn around to get in their economy sedan built and designed to be more American than any of its counterparts, you need to consider an enthusiast is a person and not their car. The enthusiast’s car, no matter what it is, reflects their tastes and wants more so than requirements. It represents a purchase made with more intent than the average driver who just picked the car that filled their needs and met their budget. It is a dedication to a brand and someone who recognizes potential self-expression in anything they produce. When you can be unique in a car that has sold over 17 million units since the MK1 was introduced, then you know what it means to be a true enthusiast. 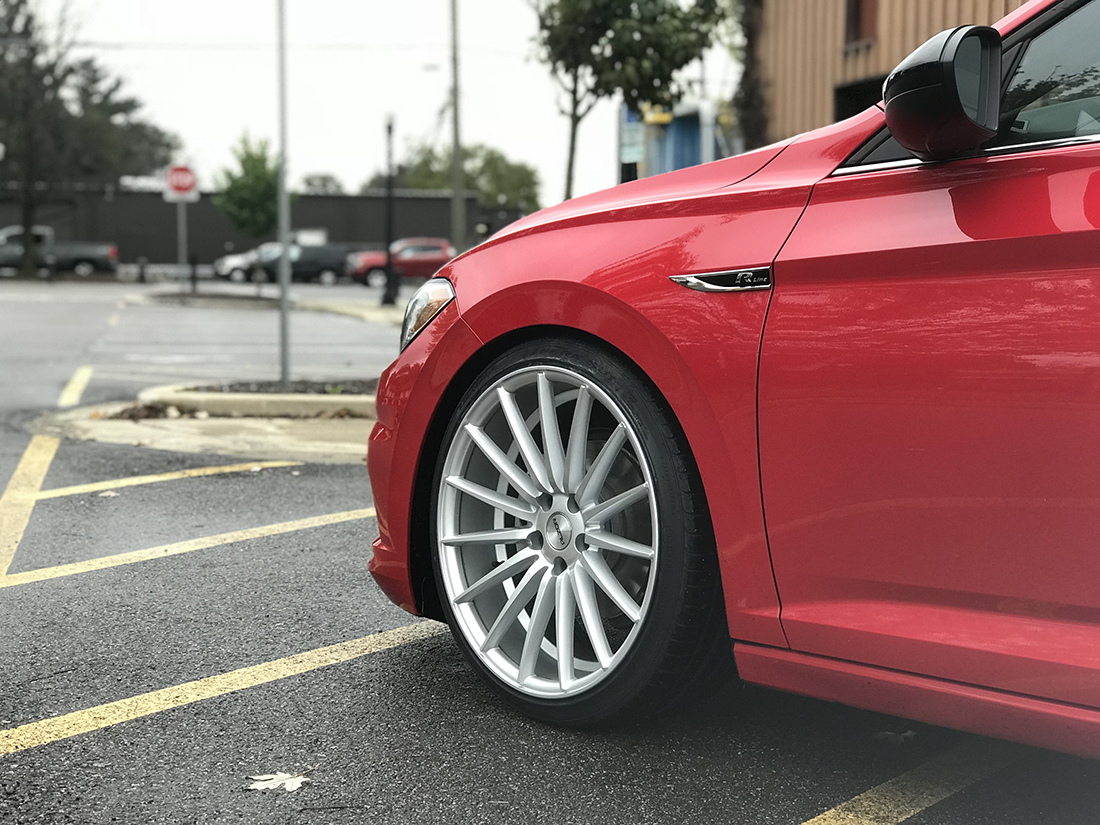 Evan’s 2019 MK7 is his daily driver, but that isn’t to say it just takes him from point A to point B. It is a creative outlet. When he all but finished his MK5 R32 build, it became more than he wanted to take every day to and from work. Buying any old daily and leaving it alone, however, is outside the realm of possibility for a gearhead like him. Evan settled on the new MK7 before it hit the dealerships here and patiently waited for his chance to score the exact car he wanted. Patience is key in these situations, and his paid off well. A few short weeks ago, Evan rolled into our R&D garage with a minty-fresh MK7 R-Line and a plan to make it one of the first modified Jettas of this generation on the road. 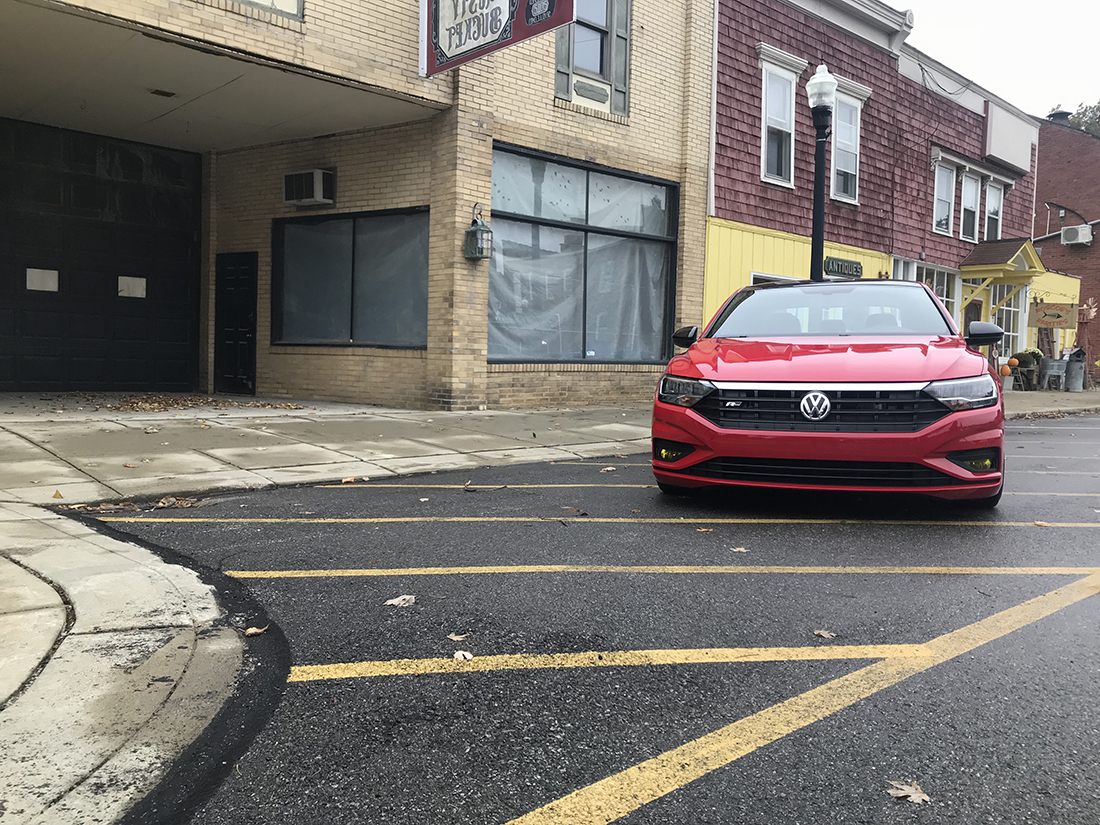 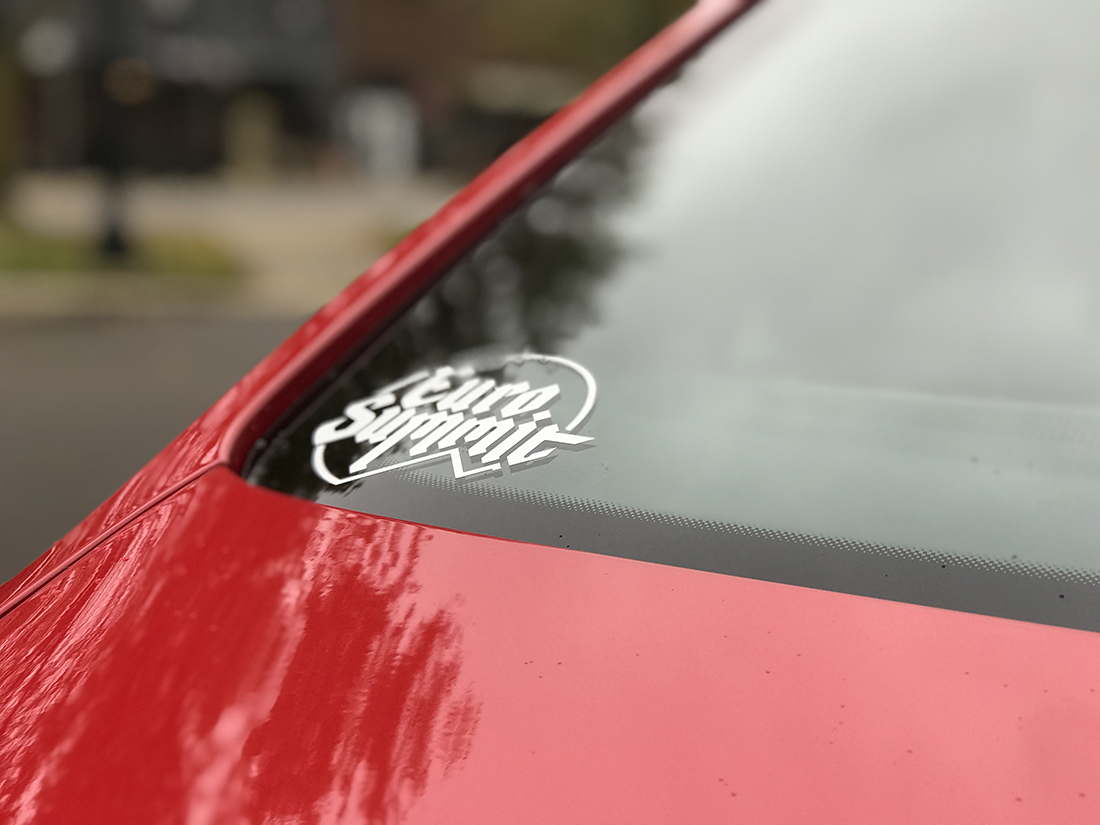 The whole car has been Americanized and lost a bit of what made the Jetta so popular to ‘enthusiasts’ in its previous models, which further adds to the unique mindset it takes to want to spend more money on one with modifications since it will never be a performance car. The independent rear suspension was ditched for torsion suspension, the 1.4T carried over from the MK6 makes three fewer horsepower, and the body has gained a few centimeters all around making it almost a mid-sized sedan counter to its traditional compact status. The new Jetta is, undeniably, a car built to meet an American market demand for more comfort, more equipment, better fuel economy, and a quiet ride. Ordinarily, those are qualities car enthusiasts avoid like potholes on an Ohio road.

For Evan, the need for a daily driver that has a spacious interior but doesn’t skimp on luxury was key. The new MK7 Jetta offers affordability and a mile-long equipment list including blind spot monitors, heated leather seats, Apple carplay, and a fancy 8-speed traditional gearbox. Everything about this car, on paper, says that it’s just another Camry competitor and has no business in the garage when an E46 M3 or B8 S4 costs the same, but this car isn’t meant to go fast or be the star of the show. The MK7 Jetta is an opportunity to be different in something otherwise unexciting. 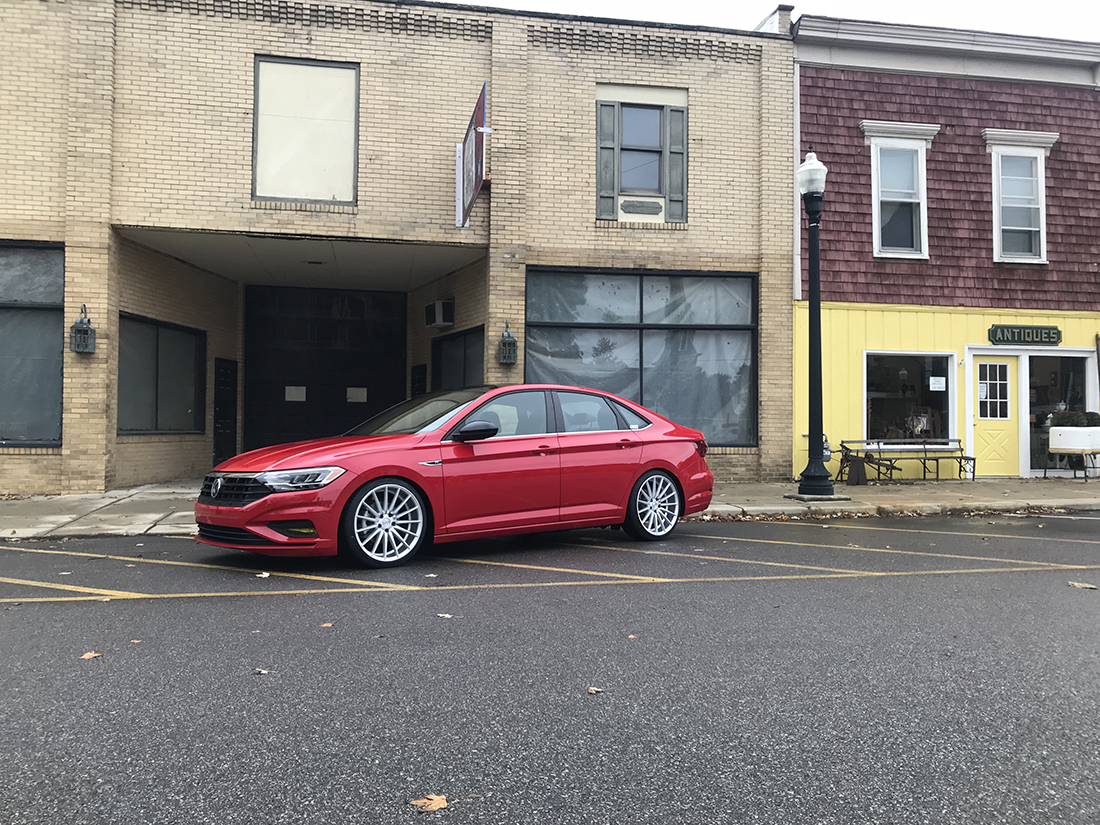 Unexciting might actually be the wrong word. The Jetta may have lost some of its ‘Jetta-ness’ that made them appeal to tuners since Jesse hit his nitrous too early, but it isn’t just another Camry badged as a Volkswagen. The heavy throttle pedal, responsive brakes, and firm but easy steering make driving the little economy sedan around town just as engaging as some of its older brothers. I would go farther and say that the torque produced by the little 1.4T and the quality of the interior adds to that enjoyment that was not present in older models. It feels much less like something that will dominate all with about 10k in engine mods, but it does seem to be more sorted out of the box as something that is fine just being left alone. 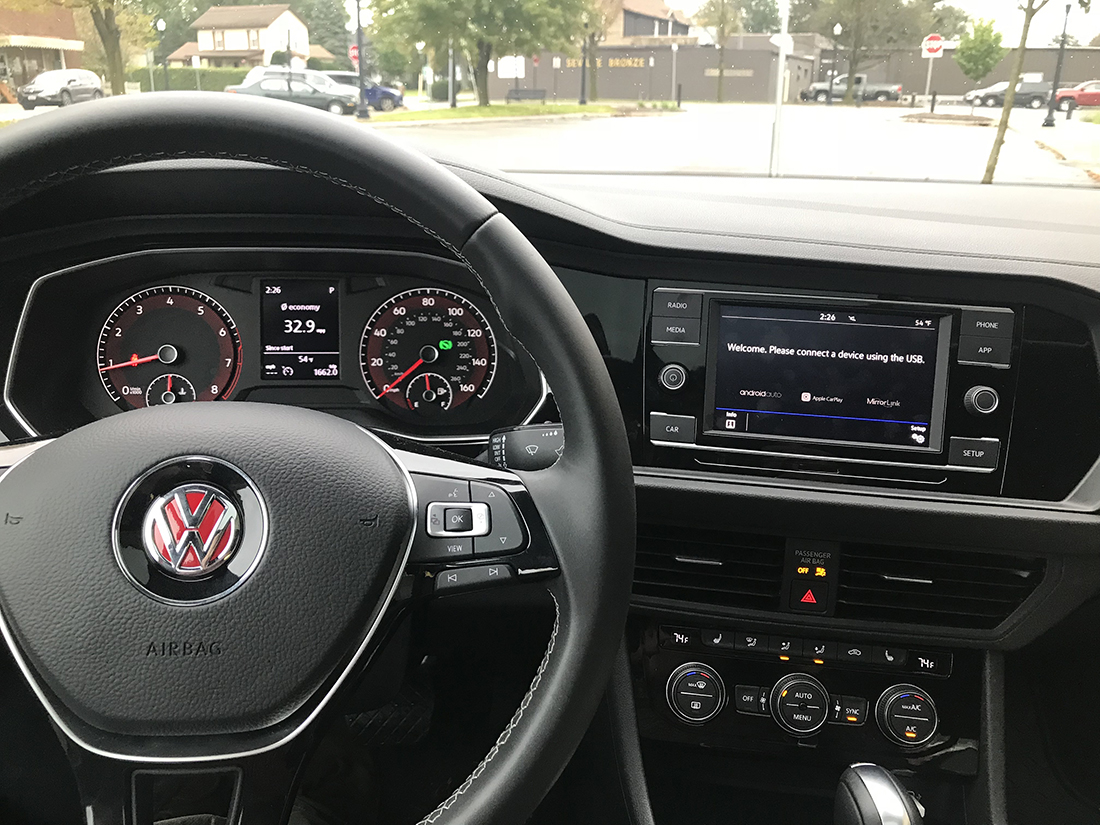 Evan, however, is an enthusiast and just can’t leave things alone when it comes to his cars. The Jetta has superb ride quality and handling out of the box, but it leaves something to be desired in the appearance department. Some of the Jetta’s comfort is derived from its tall tires, supple suspension, and monster-truck ride height. The R-Line has a 15mm lower rolling height than the other trim packages, but you might as well have a two-mile gap between fender and tire even with the lowered suspension. So Evan fitted Solo-Werks brand new coilovers on the car to drop it down even further. Complimenting the reserved lines of the sleek sedan was his choice of wheels, which are perfect for a daily driver. Alzor 084 19×8.5 ET35 sit on each corner to fill out the rest of the gap and give the whole car a completely different feel from the outside and behind the wheel. 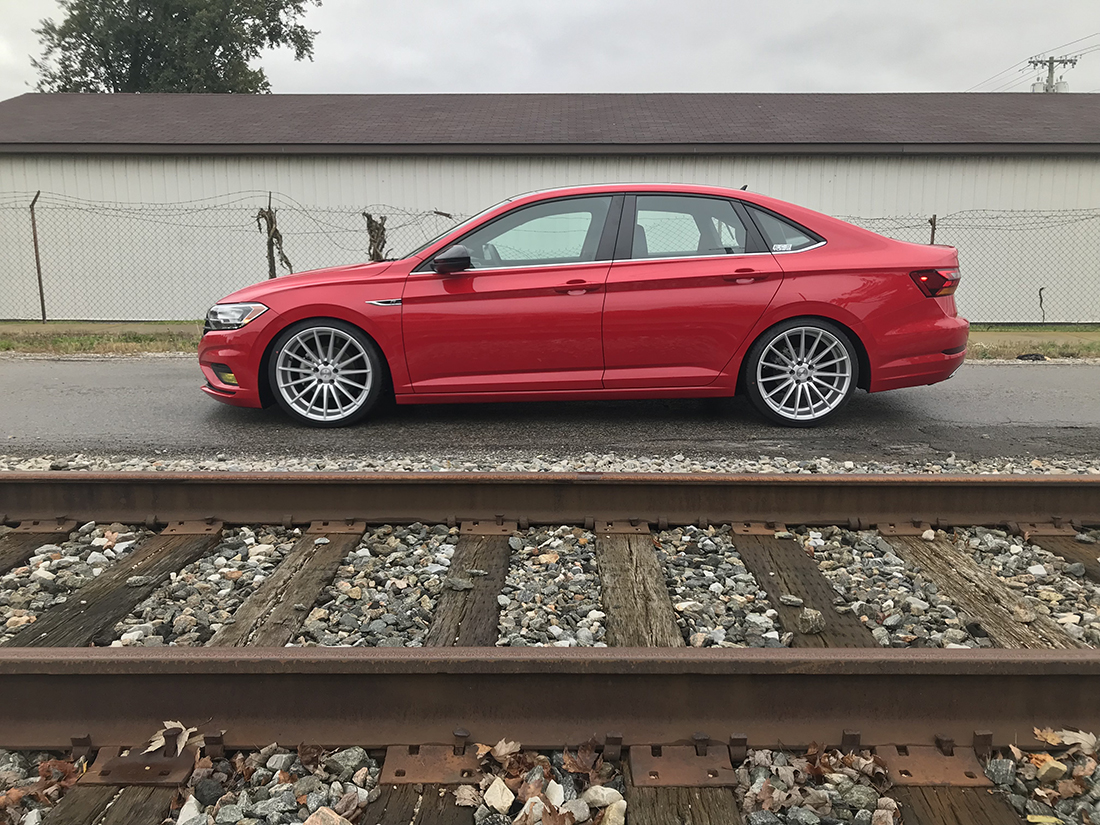 The body roll and soft float over bumps are replaced by more control through the corners and a tighter feel to the balance of the car by the Solo-Werks coilovers. Fortunately, Evan chose to use a set of coilovers meant exclusively for street use, and the ride quality is not compromised. His enthusiast box is checked since he could not leave the car alone, but also, from the clear planning that is present in the direction he has chosen to take the Jetta. The car is far from finished in his mind, but it will never be something that will require him to shift its duties away from anything but a daily driver. It will receive just enough to make it stand apart from other MK7 Jettas and feel at home parked with other VW enthusiasts in his car club, Euro Summit, but nothing that will keep it from performing as a comfortable commuter that makes almost 40MPG. 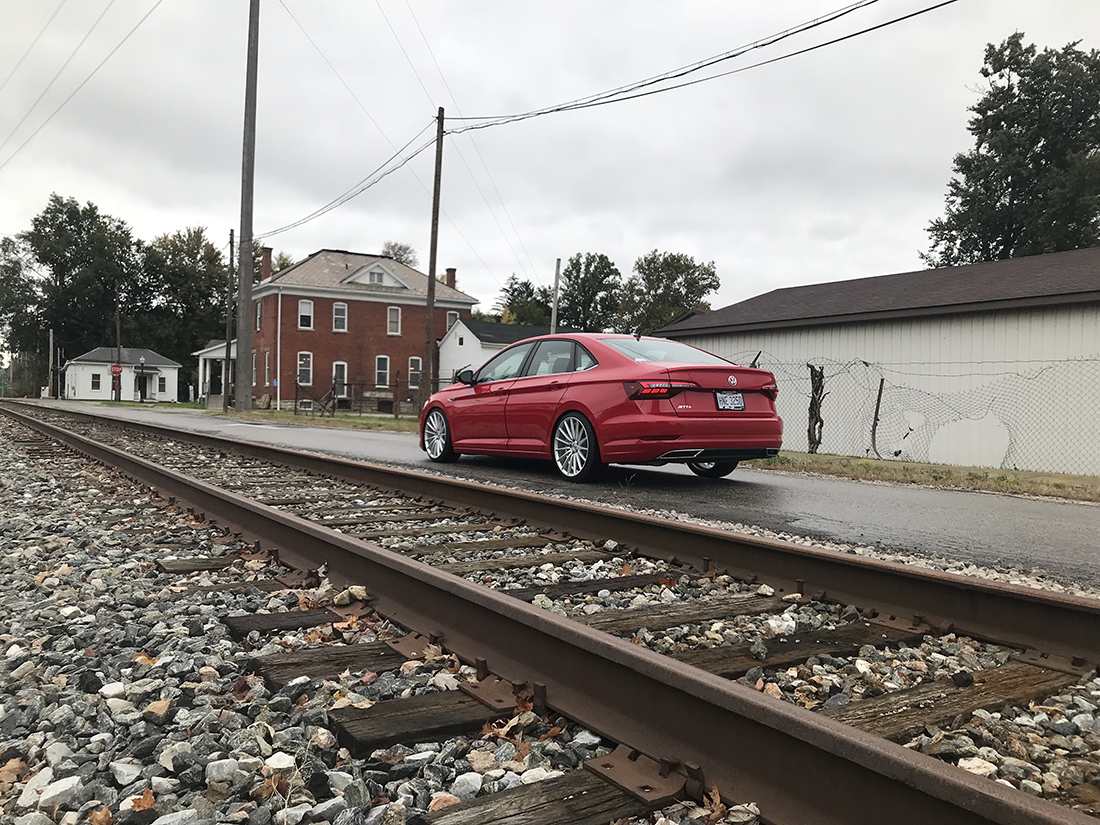 To be an enthusiast, you are required to recognize all aspects of your chosen hobby as equally valid, even when they may go against your taste. Evan, who is well versed in the world of unhinged builds that sacrifice it all for the gram, has an enthusiasm for something that others may not think is the traditional outlet for a creative with an affinity for cars. It isn’t trying to win any podiums, which gives the car such a relaxed feel. With simple modifications, Evan has shown that being an enthusiast means you can love the cars that you love without being forced to justify that interest. He has a specific purpose in mind for his car; to look good, drive comfortably, and make him happy during his commutes. A real gearhead can appreciate that mindset Evan so clearly embodies as someone who just loves cars and making them his. This Jetta is not going to receive anything crazy in the future, but Evan has given us a chance to design several new visual and performance upgrades for the car, so stay tuned as some of those may make it to his final build vision to be his perfect daily driver and one of the first of this generation to receive an enthusiast twist.

If you’re interested in making your Jetta like Evan’s or just need to tackle some maintenance, our expansive catalog of Jetta parts is at your disposal.