Do It Right, Do It Once: My 1988 BMW E30 Convertible and the Importance of Genuine Parts

It takes a special kind of person to pursue a passion they enjoy despite the existence of more convenient, more capable, and arguably more livable alternatives. With cars, the choice to drive something that is thirty years old or more requires the acceptance that some areas of ownership will be more time-consuming and labor-intensive than a new equivalent. It was through my decision to drive something vintage rather than a late-model car that I discovered a deeper appreciation for the amount of work it is to keep an old car in pristine condition and on the road every day, and the importance of quality components. It takes some know-how, lots of time, and dedication to use the best Genuine or Aftermarket replacement parts, but the rewards and gratification the work provides greatly outweighs those sacrifices. 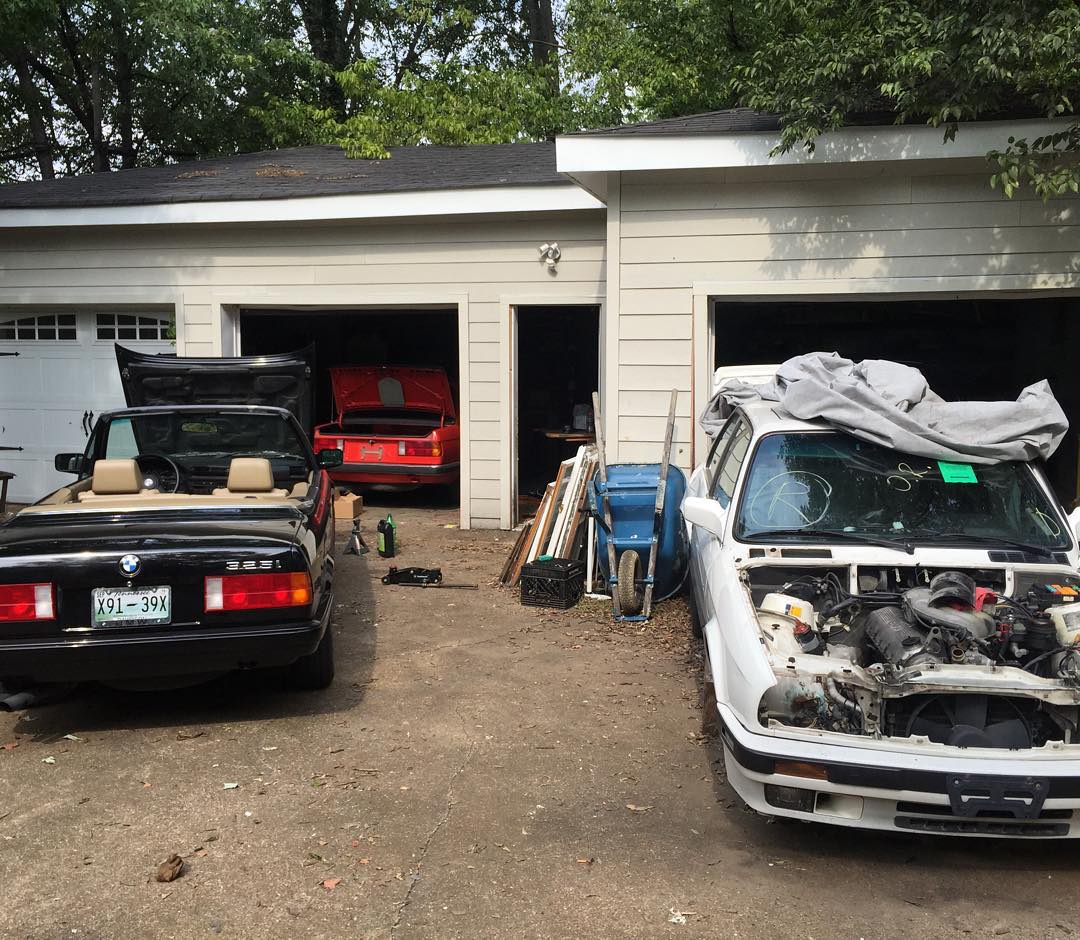 Our humble beginnings in the original shop building we used.

In 2015, I lived in Nashville, Tennessee where some friends and I started an E30 hobby shop and car club. I had fallen in love with the E30 chassis through their influence and had purchased an odd European gray market E30 that I was in the process of restoring. Thanks to that budding interest, when my late model Japanese daily driver was totaled, I decided that my best option would be to buy a car for which I already had many of the parts I needed to keep it on the road. I found a near-mint condition 1988 BMW E30 325i convertible that a collector owned in Indiana, drove up after a brief phone conversation, and made the purchase. The car was all original and had been cared for, but did need some maintenance in the near future. With that in mind, I bought the car and ordered everything I would need to return its driving bits to like new. 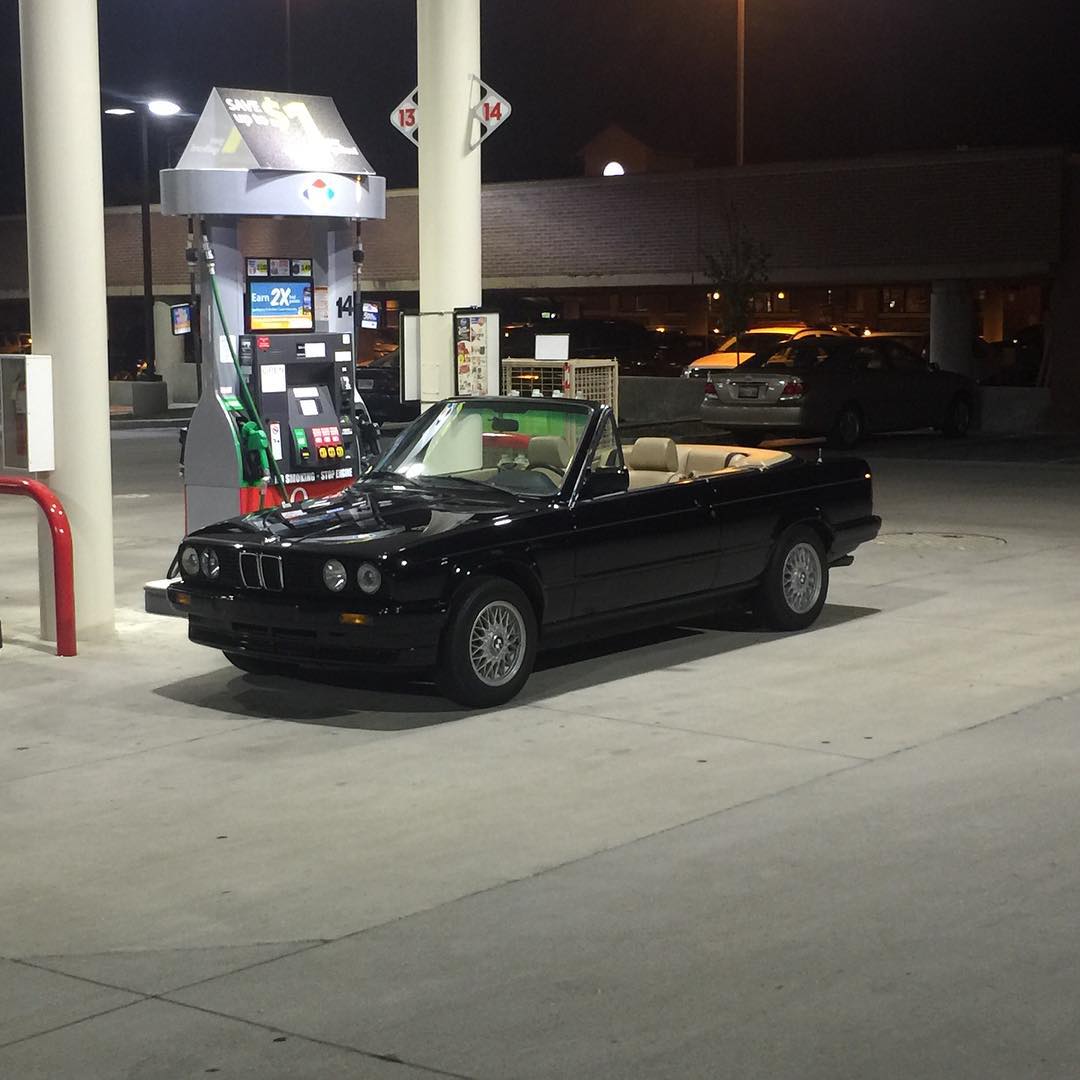 The night I bought the E30

When I brought the car home, I immediately tore into the brakes, suspension, steering components, and engine so its mechanical components would match the immaculate condition of the exterior. Fortunately, thanks to a parts car I had purchased along with my other E30, I was able to quickly replace the leaky steering rack, old brake calipers, and some trim pieces with factory original components all in excellent shape. For the wearable parts, I decided to hit as much as I could for the lowest cost. Some of that skimping would pay off later, some of it would come back and haunt me. I swapped the brake rotors, pads, tie rods, control arms, and all the gaskets for the engine along with a new water pump, timing belt, distributor, distributor rotor, ignition wires, and plugs to completely refresh my old BMW daily driver. The real work, unbeknownst to me, would be still ahead. 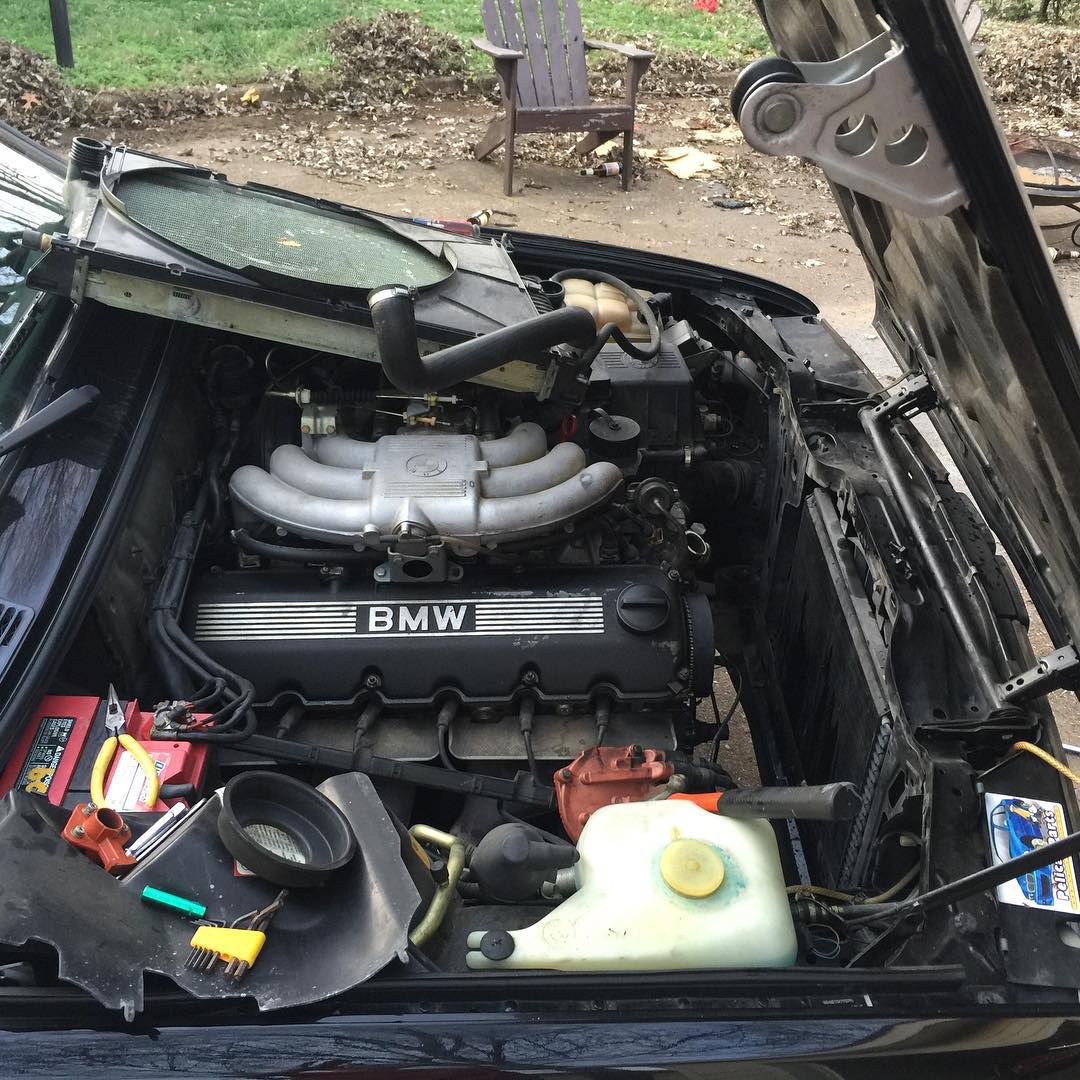 Despite love and care, sometimes old cars just don’t behave according to expectations. I was driving my convertible from Nashville to Chattanooga when an unfortunate disaster occurred. The timing belt tensioner, which I had only installed roughly six months prior, snapped in half. The engine ate itself when this happened and punched a hole in my heart, as well as a piston. This became a lesson to buy quality OEM parts, as I had purchased the cheapest timing belt kit available rather than doing it correctly with an OEM equivalent or Genuine BMW part. I was devastated. The time I had taken to refresh the engine and care I had used seemed to hit me in the face. Had I somehow made a mistake buying an old BMW on which to rely for daily transportation? 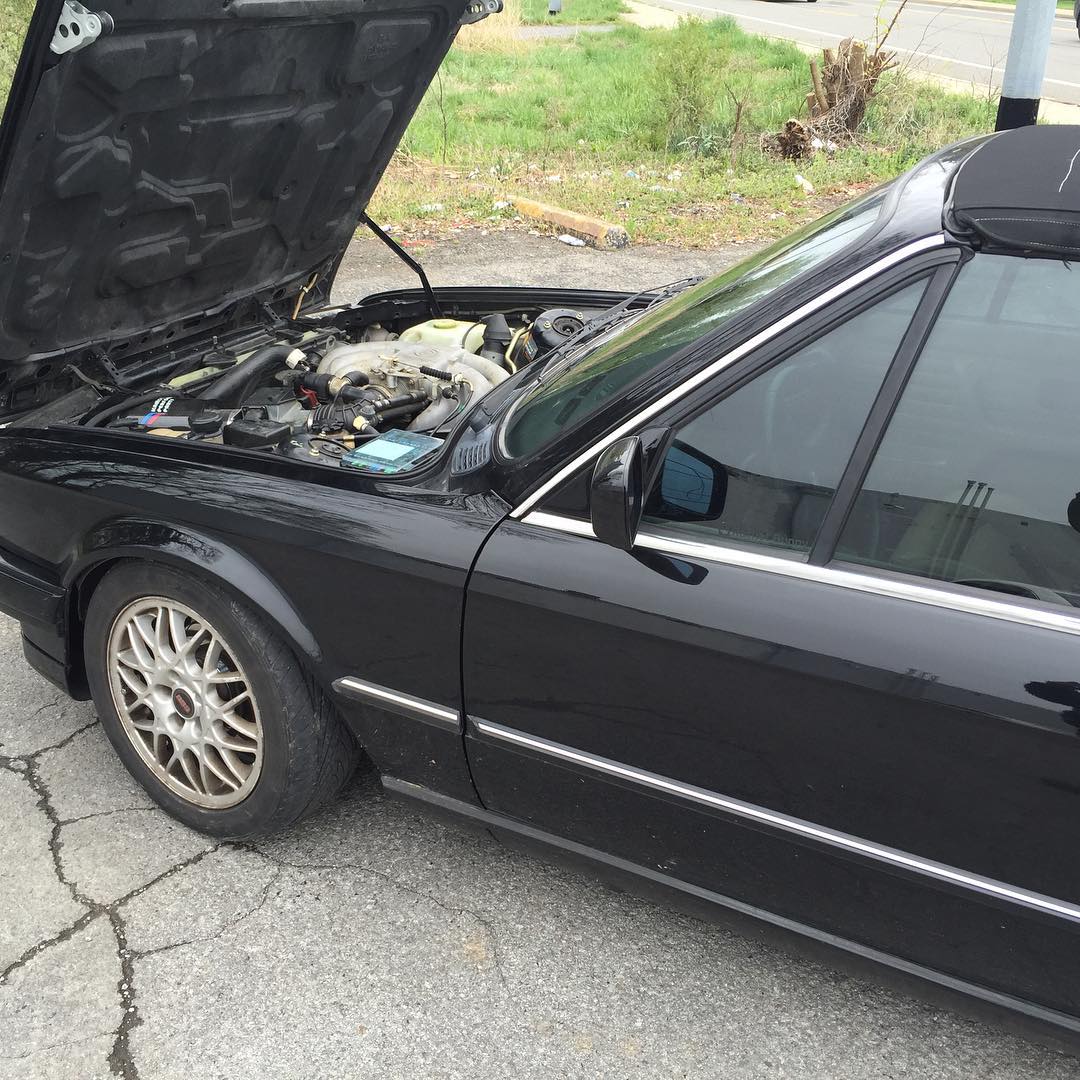 Breakfast with a side of snapped timing belt tensioner.

Ever the masochist, I decided that instead of selling the car as-is I would make this into an excuse to completely overhaul the little cabriolet. I quickly changed my plans from a week in Chattanooga to spend that time back in my friend’s shop with the E30 convertible under the knife. Fortunately, I had already purchased most of what I needed to swap my other E30 with an M52B28. With the big parts gathered, I had another major choice to make. I needed to decide whether I would go the proper route and purchase all new OEM parts, or pick and pull from junkyard cars or use cheap alternatives to get the job done at a lower cost. I chose to grit my teeth and to purchase all the new parts I needed like the oil pan gasket, valve cover gasket, coil packs, spark plugs, clutch kit, and other accompanying parts necessary from companies like Lemforder, Elring, SACHS, and Bosch to make the drivetrain as fresh as possible. While the cost of those parts made me wince with every order confirmation, I knew that I made the right decision to ensure this engine would stay in my car and get me to and from work without issue. 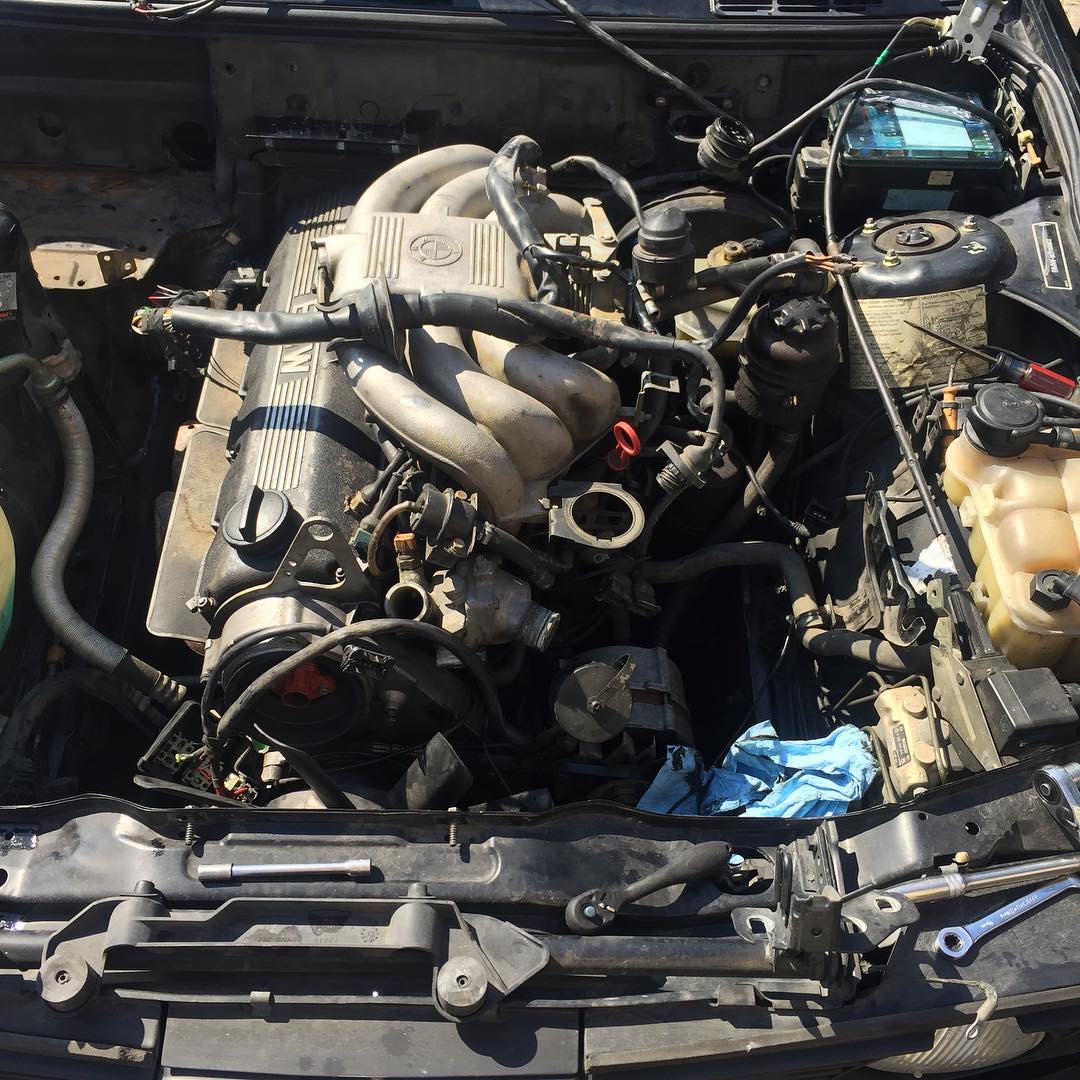 Even though my E30 was on jack stands and my vacation week was sacrificed to spend in the garage, I still look back at that venture with fond memories. It was not my first time swapping in a 24 valve engine, and that made the job run smoothly, but it was still a daunting task when I knew it was going to once again be the car on which I depended for regular transportation. My friend and I worked tirelessly. That week was one that taught me more about these cars than I ever would have known, and it was all thanks to a disaster turned learning opportunity. This aspect is one I have come to enjoy about owning E30s, as no matter how much I think I know, other E30 owners and the cars themselves constantly force upon me a state of humility. Beyond the lessons specific to the car, I also took away the knowledge that buying the best parts on the front end will mean the job only needs to be done once. While spending that time in the garage turned into a positive experience, it is one that would have never needed to happen had I purchased the quality stuff on the front end.

The convertible was finished by that Friday when a victorious first start eased my concerns that I might not have been able to drive it the following week. My worry that I would not finish the car was replaced with a hesitancy to drive the car regularly, though. After a failure like that, even with a new drivetrain, how could I rely on a thirty-year-old car every day? As the weeks went by, my confidence in the work I had completed grew whenever I drove the car. It became something I appreciated more knowing that instead of giving up, I used my passion for these old cars to keep it on the road and continuously improve it as I replaced old and worn out parts when they reached the end of their lives.

Two years later, the car is still on the road and has not yet experienced anything more than regular maintenance. That experience created a deep bond I now share with the car and helped invigorate me to always maintain it as meticulously as it had been in its whole life. Now, when I go to work on the car, I feel gratification from every part I replace or refresh. Keeping a thirty-year-old car on the road every day might be slightly more inconvenient than just driving a new car all the time, but it makes up for that slight downside with incredible senses of accomplishment and enjoyment. Unfortunately, it took a tough lesson through mistakes I made to teach me what I needed to do in order to care for my E30. Through that mistake, and the dedication to keep an old car on the road, I have gained irreplaceable memories, experiences, and knowledge thanks to a dedication to my old BMW. 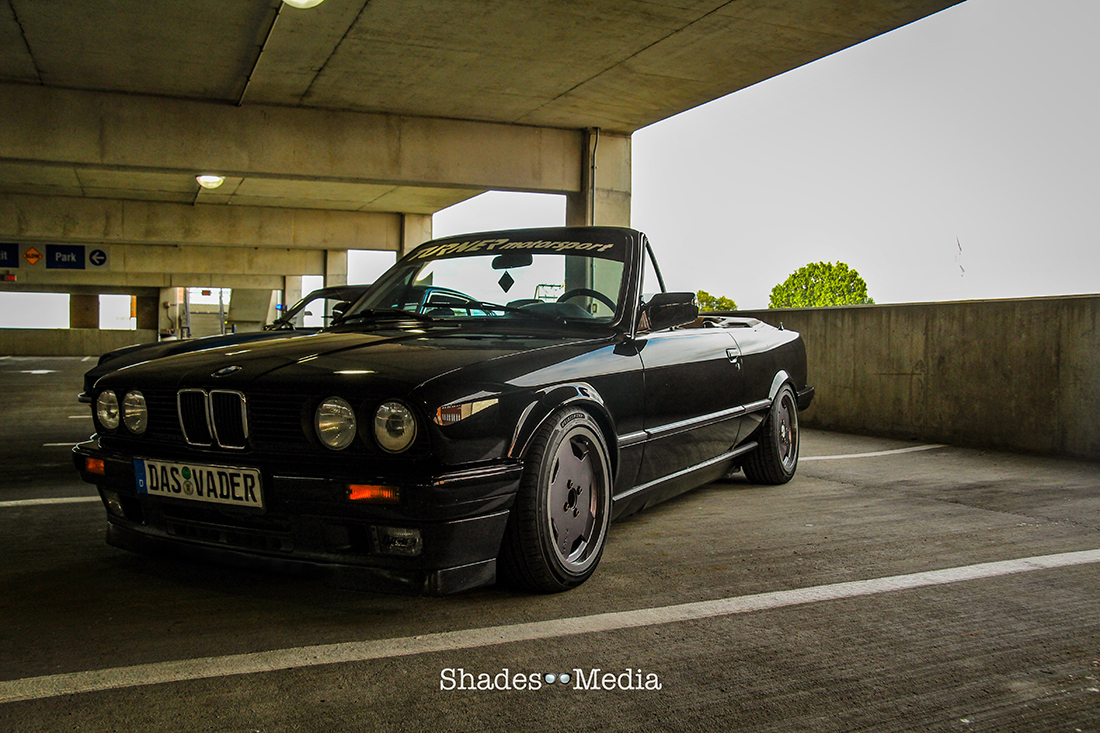